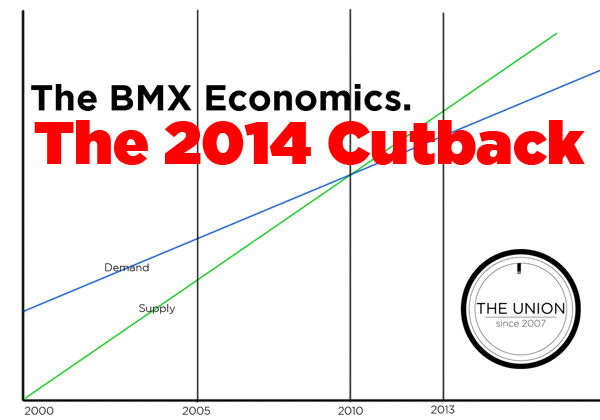 Edit: This graphic, which was a quick 5 minute photoshop job, has been a large focus for a lot of criticism lately… Sadly, more than the words. This graph is not accurate at all, and was simply just a form of showing that there are more and more knock off BMX brands popping up every day producing more and more products causing there to be more supply than demand. I don’t have numbers to verify, and I sure as shit know I wouldn’t deny it being inaccurate but there are no numbers to verify, just constant complaints about there being too many brands now days… It was just something to go with the text. Apologies to anyone who was offended by this. I’ll put a picture of my room mates dogs red rocket or something that has no relevance if something like this comes up again.

Well… I woke up this morning and came across a few interesting news pieces that have definitely re-opened up a lot of interesting questions in my mind that I brought up in the original BMX ECONOMICS piece I wrote up back in July. What are these interesting news pieces? Over the past three or so days, rumors that Diamondback, MirraCo (Let’s face it… Trek) and Redline would be making some big cuts in the next few weeks when 2014 rolls over. Let’s talk about it…

Alright, so first off let me just start off a with a few of the sources for these “rumors” that are actually not really rumors since they do have some confirmed proof that they are real. This morning Vital BMX has announced that Diamondback will be discontinuing their BMX program starting in 2014, with their entire team (Ben Hucke, Mike Grey, Diogo Canina, Darin Read, and Matt Closson) being cut and their team manager and all around awesome guy, Mike Hammond, also leaving the brand.

Also this morning, The Come Up reported that Mirra Co. will be discontinuing their program starting in 2014. Not sure on the exact details, but they said they have confirmation from multiple team members that they’re shutting down.

Then, if you caught the Zack Gerber Interview we dropped the other day, he had hinted that there will be some big changes to the Redline program in 2014. Now, I don’t know if what I’m about to say is okay or not, but I guess I’ll just be the dickhead to say it. Most of the team and team manager, Mark Flipowicz, will no longer be with the brand in 2014. They will still be supporting a few of their existing team riders, but it sounds like there will be some massive cut backs and it sounds like their 2014 product line has been altered or cut in some way as well.

So, here we are looking at 3 corporate brands all pulling the plug or a large amount of funding from their BMX programs. Diamondback, Redline and Mirra Co. (I’m just going to refer to them as Trek for the rest of this column since that’s who owned Mirra Co.) which are all parts of much larger bicycle companies that are much larger in the road, mountain bike and general consumer bicycle markets. Which I guess… doesn’t exactly surprise me at all. Why? Because the word corporate was used to describe each of these brands. These brand are all lead by people with suits (probably a lot of spandex as well) and business degrees and they’re just going off sales numbers and other statistics that help them make executive decisions on how the business can remain profitable or stabilize itself enough to turn a profit in the future.

What does it really mean for BMX losing these brands? Well, to be honest… Not a lot other than money. I’m willing to bet each of the pro team riders that have been eliminated from these programs have lost a pretty decent pay check and / or travel budget that helped them out pretty substantially to get by the past few years. Otherwise, large corporate events like Dew Tour and some of the magazines and websites will probably be losing some solid advertising dollars as well. Which, yeah, it’s going to suck to lose that, but in reality it’s not going to kill BMX.

This goes back to my original BMX Economics piece where I talked about the waterfall effect that happens when sales and what not start to slow down. Let’s just follow the chain of events that probably lead to this… Sales for complete bikes (let’s face it, these guys weren’t really making much in the after market frames and parts department) at shops and mail-orders were down, so those shops were making smaller or no orders for new bikes to stock their stores, fewer sales from the brands mean that they’re either a.) sitting on a bunch of inventory they can’t sell or b.) are unable to sell at a profit that will impress these board members of these large brands. So now these people are figuring out where they need to make the cuts to make things profitable again. First off the top, they’re going to make cuts to production with smaller orders, then they’re going to cut back the team budget (or eliminate it… Elimination seems to be the easier route) and then they will cut back their marketing budget and then finally they make some price cuts to get shops interested in buying the product again so they can replenish the budget or fix the debt they have built up from the past year (or few years even).

Will Diamondback and Redline stop making BMX bikes? Nope. I guarantee you will be able to go to any bike shop that carry the brands and either have their new 2014 bikes (I’m sure these brands are already halfway through getting 2015 made too) in stock, or available to order. These brands do see a profit from BMX, it might not be anything near what road and mountain bikes produce for them, but they will always want to make bikes for kids to get on, and you better believe that 20″ is going to be the bread and butter that will eventually get a kid on their 26″ mountain bike.

Mirra Co.? I’m going to be brutal and just say it. This is one brand I’m honestly amazed has made it 7 years. I didn’t think it would make it back when Nigel Sylvester and Dave Mirra were riding for the brand even. It’s done and I’m sure Trek is cutting its losses and going make back all their losses with $11,000 Triathlon Bikes. That’s just the way it works. Businesses fail all the time and people walk away when the money isn’t right.

So does it end here? Here’s what I think… Nope. 2013 was a hell of a rough year for everyone in BMX. I don’t think any brand really did what they had hoped for, even with low expectations, and that’s just how things go. BMX was doing pretty well for a few years and an excessive number of brands and distributors popped up faster than you could imagine all producing very similar products trying to reach close to the same number of people. Mix that in with how much the internet has affected the way we do business just in the past 3 years alone and things are still pretty twisted and mangled and things have gone all out of balance.
The new year always brings a lot of surprising sponsor changes and news… and I’m predicting we will see a good number of very talented paid riders losing sponsors starting at the beginning of the new year. I also expect to see most brands making some pretty substantial budget cuts as far as travel and marketing goes. I also for see some slimmed down product lines from a lot of the brands that had a tough year as well. I think 2014 will be a real reset year for a lot of brands and we will see a lot of similar products that have been diluted with colors and brand names cut back. Hell, I’m sure there are a lot of small brands that will close their doors too, which, like it or not, needs to happen.

In my opinion, this is the problem going into 2014..
1. There are too many brands making too many similar products… trying to sell to the same number of riders.
2. There are too many distributors trying to sell all of these very similar products.
3. There are too many distributors doing their own in-house brands under cutting brands, including the very brands they distribute.
4. BMX has always been a sport directed at kids… Kids without money that rely on their parents… Parents don’t always have the budget to buy expensive parts for their kids when a mortgage and bills need to be paid. The economy does matter when it comes to this.

Now, is that all of the problems? Are there a million other aspects that could be affecting things? Of course. But I am just saying from my perspective, these are the main problems.

Online versus bike shop battles continue to exist, but I think there has been a balance found. People do like the convenience of ordering products online and having things delivered right to their door… But I know a lot of people like the ability to go to their local shop and hold the products and see them in person. Also, having a local shop that supports BMX is a great way to build a scene and friendships…. Message boards aren’t the same.

In my opinion, what does BMX need in 2014?
1. Fewer knock off brands trying to make catalog parts from Taiwan.
2. Fewer corporate brands that consider BMX just a small percentage of their business and can and will cut things if it doesn’t make them X amount of profit.
3. More support for brands that have been in the game for years, are rider owned and ran and are doing things to give back to BMX.
4. More BMX shops. These are amazing ways to build scenes and get more riders into the sport.
5. More events like Texas Toast to really show what BMX is about.

All of these things are definitely happening and will continue to happen when the right people are making moves.

So in conclusion, BMX is losing some big corporate sponsors that had money to dump out in 2014. Yes, it will hurt a lot of riders who were getting support from them. No, I don’t think it will really hurt BMX as a whole too terrible since it just means less competition for the rider owned and ran brands. Yes, I think BMX will have an up year once all the trash is cleaned up and the brands doing the right things are able to get things back on track with less mess holding them down.

What do you think? Let’s hear it!

VISIT: FRONT PAGE // DAILY SECTION // BMX COLOR APP // BMX VIDEOS
You are here: Home / blog / BMX Economics: Cutback Rumor Mill
Note: This site contains affiliate links and we could recieve a small comission that supports this site if you were to make a purchase on their websites using our links.