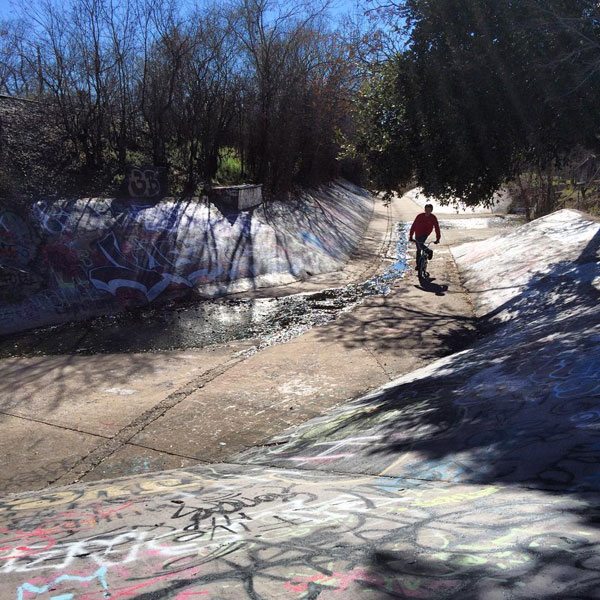 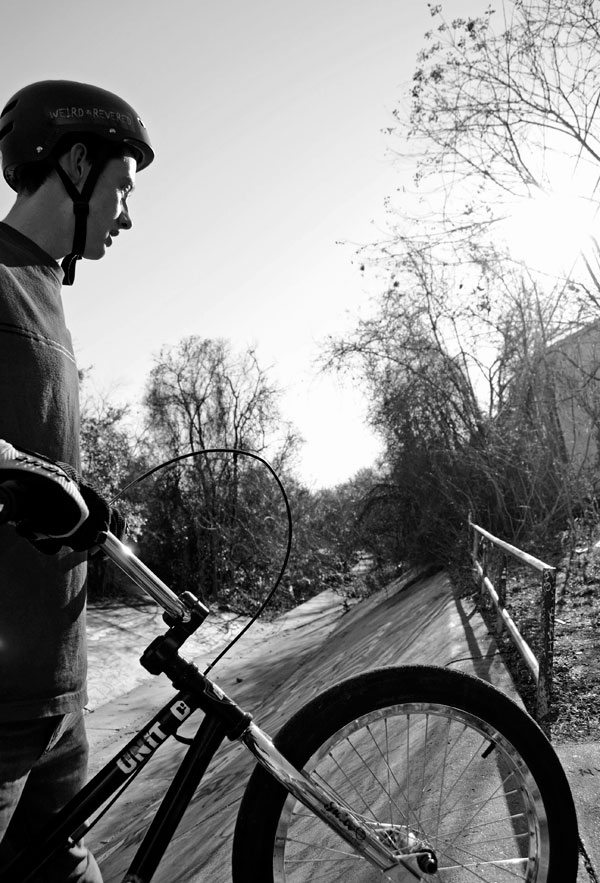 House Park is more than just an amazing skatepark; it’s a central meeting place in Austin for skateboarders and BMXers alike. If you’re keen to meet new people or potentially your favorite pro, your best shot is at 1213 Shoal Creek Boulevard. Back in February during Reading Week (the Canadian post-secondary equivalent of Spring Break), my friend, Tyler and I ventured to the BMX mecca of Austin, Texas. One spot we indeed planned to ride on our trip was House Park.

We arrived at the vacant skatepark in the morning, able to experience every transition of the concrete wonderland with little interruption. After a couple hours we were about to leave for lunch when I noticed a car pull up with a familiar bike atop its rack. I had a hunch who was behind the wheel, but the driver wore sunglasses which made it difficult to recognize his face. I told Tyler we should stay just a bit longer. After watching the rider flow a few lines, I soon realized my hunch was accurate. It was one of my favorite childhood pro’s. He approached us soon after and was incredibly friendly. He suggested some local spots for us to check out, one of which was a drainage ditch with some DIY creations. Hailing from the Great White North (A.K.A. The Land of No Ditches), I had never ridden a concrete ditch before. It was one of those spots still unchecked on my mental “BMX Bucket List.” The location of the ditch was on the other side of town. We didn’t have a vehicle and decided to pedal there the next day.
The following morning we began the 14 km ride from our sketchy AirBNB trailer in East Austin (more on that another time) to the approximate location of the spot plotted on our map. Along the route there was a mellow 4.5 km uphill stretch which proved tiresome, but became a nice downhill coast on the way back. Once we arrived in approximately the correct area we started searching for the ditch. We wandered in some bushes, between people’s houses, and down various streets, but could not find it. After 30 minutes of searching we were about to give up. Luckily, Tyler made one last attempt on his phone to get some better directions and was successful. We were only a few blocks away. 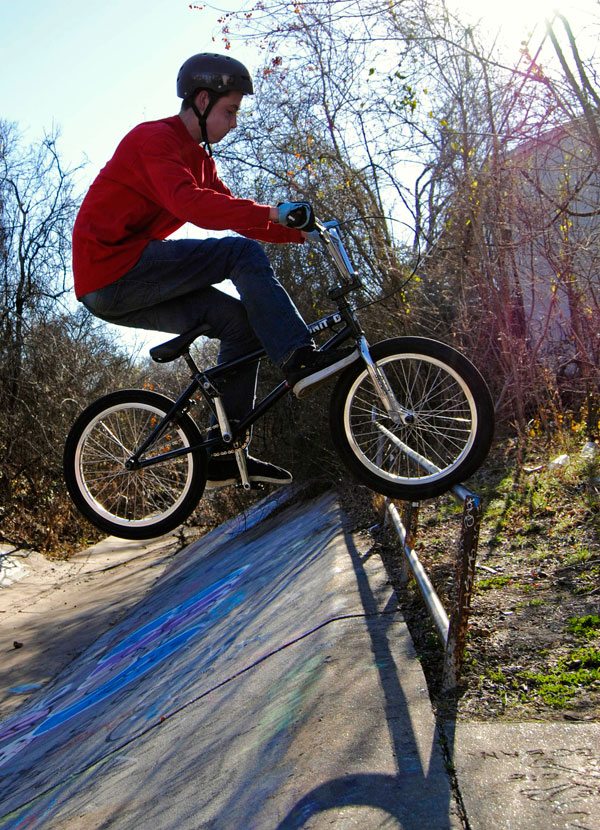 We rode the ditch for a while, filming clips and taking some photos. During this time various groups of people kept walking through the secluded area, some of which were “repeat customers.” Protective of our camera gear, we kept an eye on the backpack at all times. Tyler was filming a clip for me when a guy on his own came walking up the ditch and towards the backpack. Tyler was a few steps away, fully utilizing his peripherals, as this dude maintained course straight for the bag. There were two decisions at this point: 1) Do nothing and hope he isn’t going to take the bag, or 2) Lunge towards him and grab the bag. Tyler chose the latter, snatching the backpack from in front of the guy and cutting him off. He looked slightly offended and we soon realized his intentions probably weren’t inimical. Tyler apologized, but he didn’t say anything and walked away with a dead look in his eyes.
About 10 minutes later our falsely accused backpack snatcher returned to the ditch once again, only this time with a posse of about 5 other people. Our nervousness soon intensified. As the group approached, we smiled skittishly, doing our best to appear non-confrontational. Once again there were two choices: 1) Do nothing, or 2) Grab the bag. Outnumbered, this time we opted for choice #1. We watched as the group steered clear of the backpack and us. They were simply passing through. Crisis averted. Tyler and I laughed about the situation, realizing just how paranoid we were. In these types of situations, it usually doesn’t hurt to be overly careful. Moderate embarrassment is better than losing a bag full of cameras with documented travel memories. All in all, we certainly showed our cautiously “Canadian” side in Texas, but in the process added an internal check mark to the BMX bucket list with a frivolous story to tell thereafter.

Like to write? Want to have your writing featured on the site? Get in touch with us RIGHT HERE!

Check out the Front Page or hit up the Daily Section for all the latest BMX videos, news, products and more!

VISIT: FRONT PAGE // DAILY SECTION // BMX COLOR APP // BMX VIDEOS
You are here: Home / blog / Editorial: Cautiously “Canadian”
Note: This site contains affiliate links and we could recieve a small comission that supports this site if you were to make a purchase on their websites.