As many of you know, September is a busy month for the BMX industry, and the entire bicycle industry, thanks to Interbike. Although the internet has made it MUCH easier for brands to communicate with shops, distributors and riders around the world, it is still one of those events that is good for everyone to come together and meet face to face and give shops and industry members an opportunity to take a closer look at what brands have been working on for the past year. We have been getting a few sneak peeks from brands over the past few weeks and it has given us a fairly rough idea of what we’ll be seeing at the tradeshow this coming week. Since this will be our 8th year visiting Las Vegas for the show, we figured it would be fun to put together some predictions as to just what we might expect to see as far as products go from BMX brands… So let’s take a look. 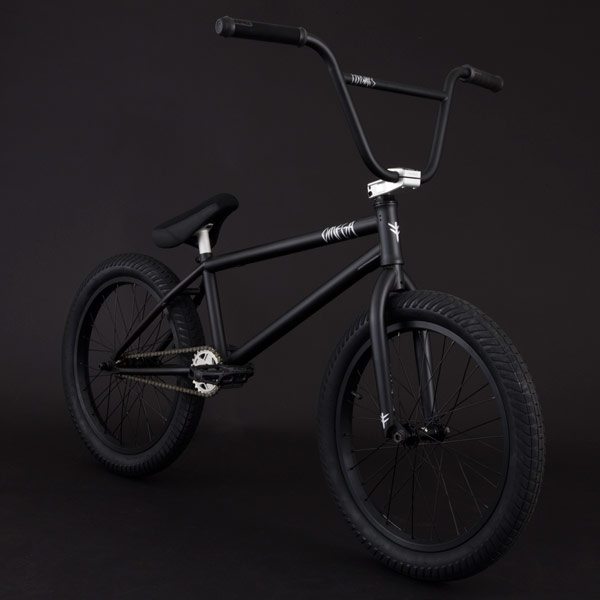 Although a number of brands have already released their 2016 bikes, we are expecting to see A LOT of complete bikes from 16″ to top of the line 20″ bikes and even a few cruisers and bigger bikes. It’s kind of crazy how it feels like the next years bikes are coming out earlier and earlier every year, but that’s okay since they just keep getting better.
As part of this expectation, we’re going to be seeing bigger lines of bikes from brands. We’re not expecting to see some massive additions, but more focus put on the younger generation of riders and entry level and some very top end bikes that are beyond ready to go right out of the box. Brands like Wethepeople, Fit Bike Co. Kink Bikes, Stolen Bikes and Subrosa are always pumping out some big ranges of bikes, so there will be plenty of bikes to see there. We do know there will be a few other brands that will be putting more emphasis on complete bikes as well like Fly Bikes, Volume Bikes and Cult, so expect to see plenty of options from them as well. 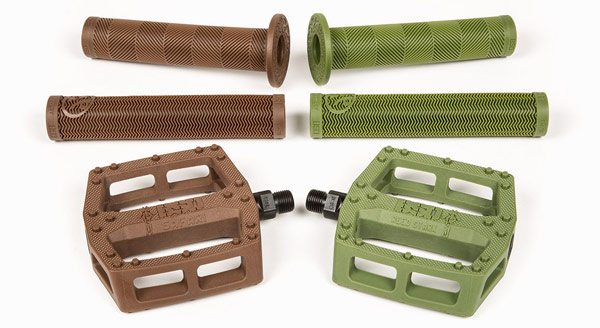 Less slick colorways
Yes, we’ll still see a number of products being offered in oil slick, rainbow, jet fuel and whatever other names they have for the color, but don’t expect to see as much as we have in previous years. In fact, there’s a good chance we’ll even seen less camouflage this year since that was a big focus over the past two years as well. What do we expect to see? We’ll be seeing more “natural” colors this year for sure. A few brands have already given us a preview of colors like Military green (which has been gaining popularity over the past two years again), brown and tan which is usually a good indicator that we’ll see more of that once the show rolls around. We also expect to see more “Splatter” colors since those have been real popular with a few brands lately. Volume Bikes and Eclat are fans, Shadow Conspiracy and a few others have their “tie dye” or “Marble” color which is similar to splatter as well.

So, expect more “neutral” colors versus extra flashy and bright. Even though based off how fast Aaron Ross’ Sunday X Empire Motoross frame sold out, there’s a good chance we’ll still see those bright colors, haha.

More Tire Color OptionsThe colorful BMX Tire Takeover couldn’t possibly be winding down yet… We’re just not sure exactly what the mad scientists have been cooking up just yet! 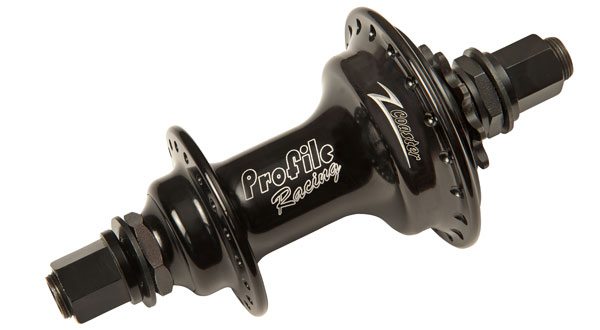 More Freecoasters
The past two years have really brought A LOT of focus on freecoasters with pretty much every brand offering a version of their own, most of which that worked off the existing KHE Internals. We don’t doubt that we’ll be seeing a the same trend this year since freecoasters continue to gain popularity and are getting to be more reliable. Especially with Odyssey and Profile Racing releasing their freecoasters this past year, there’s no doubt that there is still innovation there.

Weight and Height
Weight weenies beware, we’ve been noticing more brands not being as afraid to put a little extra material into their products to help beef up the strength. Although we won’t be seeing anything too heavy, we just have noticed that a few extra ounces do seem to add a lot of value to brands reputations for strong products that can hold up to all the gnarly shit going down on the streets, skateparks and trails these days.
We’ve also seen the height of seat tubes and head tubes coming up a bit on frames over the course of the past few years with 9″ starting to become the norm again and even a handful of frames starting to move past that on up to 10″. We’re definitely beyond the days of the low slung Killorado… Again. There’s also a good chance that we’ll start seeing bar heights come down a bit as well since it almost appeared that things have peeked out in that department.

Fewer Brands
Yeah, we’ve seen a handful of brands and distributors disappear over the past few years or even scale back quite a bit, but that’s not really what we’re talking about. We’re talking about fewer brands taking up space on the floor of Interbike in the Mandalay Bay. Why? Well, because it’s a big investment for brands to opt into Interbike and to have a booth costs A LOT of money. We heard rumors that is can cost some brands upwards of $100,000 for this week, which is pretty wild (but also probably super inexpensive compared to some industries with big money floating around), which has left a handful of brands to back out or move their “booth” to a suite in one of the near by hotels. We’ll have to wait how things pan out, but we’re pretty sure we’ll spend about as much time getting lost looking for suites in hotels than we do screaming at the less than impressive WI-FI that we’ll be working with. Luckily the suites usually have some booze and food to make up for the hike. 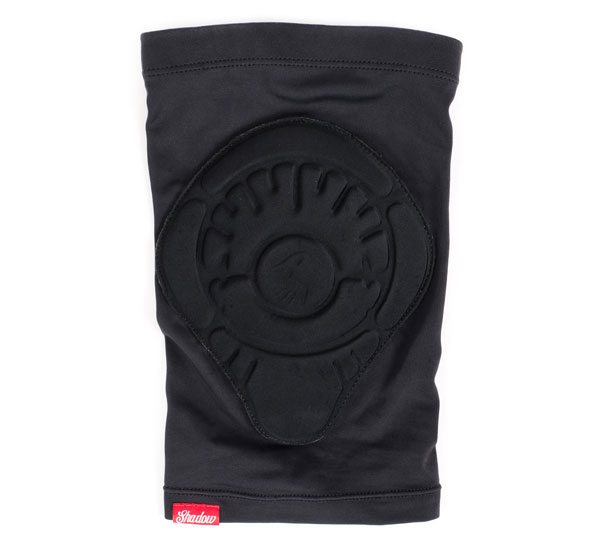 More “Safety” Geared Equipment
With safety gear always being important when it comes to BMX, it does seem like more brands are putting time and effort into creating some products that are going to help keep you from really getting wrecked when things go wrong. With brands like G-Form, FUSE Protection and The Shadow Conspiracy offering some dialed pads that get the job done and Subrosa offering products like lights and locks to prevent theft, there’s definitely been more interest in this aspect of BMX. So, we have a feeling we’ll see more brands offering pads in 2016. This is one we could be completely wrong on though, haha. 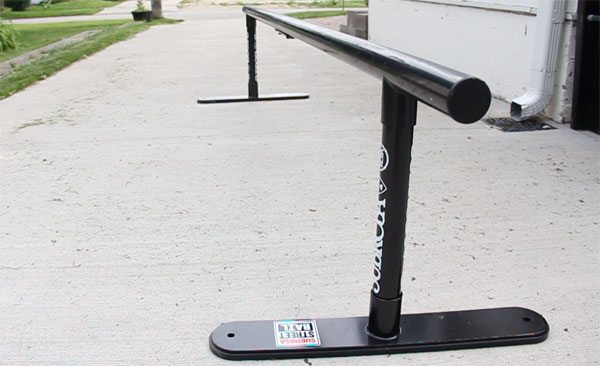 Another “Street Rail”?
Last year Subrosa unveiled the Street Rail and since then it has quickly become one of the most recognizable things in Instagram clips and edits. There’s a TON of pros and riders that have been utilizing this gem and we already know that Subrosa have plans of releasing an A-Frame kit and a few other options to make it even more useful. We have no reason to doubt that other brands will be looking to cash in on this idea and put a little competition in the rail market. Have we seen any hints that other brands are working on this? Nope… But let’s be real, when in BMX’s history have we ever seen only one brand offer a product that is as successful and popular as the Street Rail?

More Hub Guards
While we’re on the topic of grinding, it’s safe to say that we’ll be seeing more hub guards joining the line up for brands. Madera recently released their new plastic guard, Proper just released their new Select hub guards and we did see that Division Brand will be offering hub guards on their 2016 complete bike range. There’s bound to be a few other options popping up this year to help alleviate the wear and tear found on hubs and spokes from all those grind combos you are doing on your Street Rail, right? 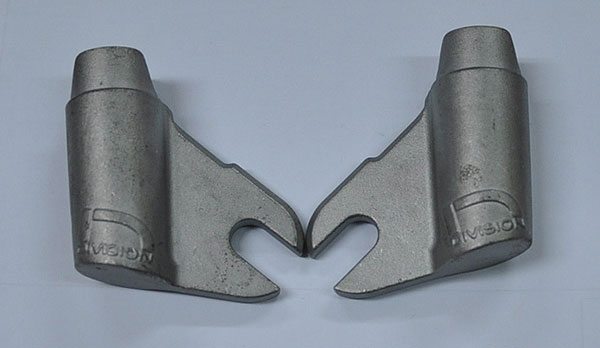 More Investment Casting
Investment Casting has been apart of BMX for quite a while now and it seems like pretty much every single brand utilizes this style of construction on their products. It’s a great idea and it works really well. Our prediction is that we’ll see Investment Casting on more frames and forks than we will see them without. I mean, we found out this morning that BSD has added Investment Cast dropout to all of their 2016 frames….

More Pros Making an Appearance
Alright this isn’t product related, but due to Texas Toast now happening this year, Ride BMX have been forced to move NORA Cup back to Interbike since it’s really the only other opportunity to get this much of the industry together in one place. With that being said, more pro riders will be in town hanging out at the show while they are waiting for the party to start Thursday night… Or really any party that is starting. Kids that will be making the trip better have their markers ready to get some autographs.

So, that’s some of our predictions that we’ll be seeing for Interbike this coming week. As a reminder, this is all speculation and there’s a good chance we could be completely wrong, but then again this isn’t our first rodeo and we’ve been following trends for a while now and have some good idea of what to expect.

What do you think? Any predictions for things we’ll see at Interbike this year? Let us know in the comments!

VISIT: FRONT PAGE // DAILY SECTION // BMX COLOR APP // BMX VIDEOS
You are here: Home / blog / Interbike 2015 Predictions
Note: This site contains affiliate links and we could receive a small commission that supports this site if you were to make a purchase on their websites using our links for no extra charge to you.