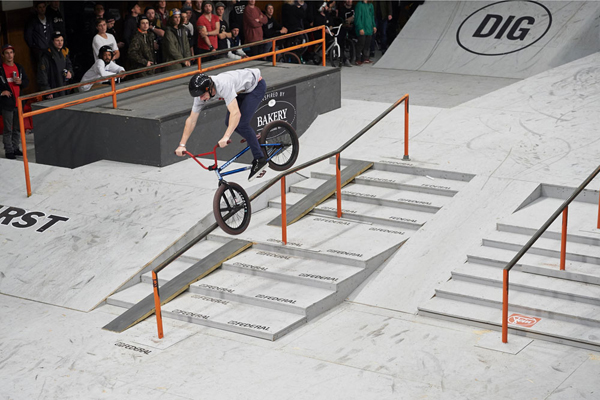 Yesterday, the 2014 Vans Rebel Jam went down in London and things got wild! At the end of the day, Alex Donnachie ended up taking home the well deserved win after destroying the course! Check out the full press-release below then check out a photogallery over on Freedom BMX!

If you missed the live feed, head over to the Red Bull website where they have the full live stream ready to replay now!

Expect a bunch of footage from this one to start flooding in soon as well!

Check the full press release after the jump.

“After months of preparation and a killer season of high tempo competition behind them, this weekend saw Vans unleash some of the world’s finest BMXers on London for the Vans Rebeljam.

Now in its 10th year and having earned a reputation for creative courses and good vibes, the Vans Rebeljam has become renowned as the closing event of the season. In its first visit to the UK’s capital, the event took over the York Hall Leisure Centre in East London – a venue with a long history of showdowns, as the site is perhaps best known as one of the nation’s most loved boxing arenas.

Whilst competition was fierce, this weekend saw a less violent approach to taking the title, as many of the best street BMX riders from around the globe assembled to battle it out for a place on the podium. The riders took Friday to warm up and get used to the compact set up, before heading down to House of Vans to check out the 21 Years of DIG exhibition showcasing over two decades of BMX culture though print, photography, art and design, and relax with a couple of beers.

With 66 riders competing for just 12 places in the finals on Saturday, no one was wasting any time on the feature-packed course. One of the highlight obstacles was the Red Bull Rail, which saw many of the riders using as their first hit as they dropped in, and again on the return. For sheer spectacle, the big quarter at the end of the course was a winner, providing a whippy transition for the riders to loft above the crowd and impress spectators. Ben Hennon, Course Builder said “I’m really happy with rebeljam this year. Vans gave us the opportunity to build the course, everyone seemed to like it. The riding was good and no one got hurt. Now it’s time to tear down the ramps, but in typical Vans rebeljam fashion, they’re going to be donated to Rampworks skatepark.”

Also in true Vans rebeljam style, the competition was judged in a typically “off the wall” fashion, with special awards being given for ‘Style’, ‘Creativity’ and ‘Hardest Trick’. What’s more, competition was so hot, the judges decided to award not one, but four Wild Cards into the finals, for those riders who may not have made the grade on points, but impressed the panel and so earned a place amongst the best. Adding a little spice to the finals, it was Russia’s Dennis Pavlov, Dan Paley from the UK, Roy van Kempen from the Netherlands and France’s Kevin Kalkoff who made it into the top 16 now going through to the finals’ and go head-to-head in an intense jam format. All worthy additions to the line up, it was Kevin Kalkoff who shone brightest, taking home the special award for Style. “I was really surprised to win the best style award. I came here knowing it was a street contest but I saw the course and said to myself I’ll go anyway because I really like the rebeljam format. I made it to the finals through a wildcard and am really happy I got the best style award”, commented a visibly surprised Kalkoff.

As the top 16 got to work, the accolade of winning and a €20,000 prize purse was proving to be a good incentive, with the action stepping up and some insane tricks being thrown down. Highlights in the finals were Bruno Hoffman, hitting a variety of lines in his signature technical, yet stylish way, earning himself the special Vans award for Creativity. Joining him and Kevin Kalkoff was Joris Coulomb with his rail manual to switch whip into the bank being rewarded as Hardest Trick. Upon receiving his award, Coulomb said “The course was perfect for my type of riding, and the vibe was cool. I got stoked to ride. The last trick just crossed my mind. It was scary but I knew I could do that rail manual to switch whip in the bank. So stoked about it!”

Alex Donnachie also rode hard, and showing full commitment with insanely technical tricks and long lines he dealt the knockout blow, and with it, took first place on the podium and the Vans Rebeljam crown. “I only came here because I knew the BSD guys were all coming down, so I was just here for a good time. I’m not entering contests much but I liked the course set up and enjoyed it. The win hasn’t sank in just yet but it was good to do well in front of all my friends” said a very happy Donnachie, after being mobbed by the crowd who erupted as his win was announced.

As the event drew to a close, the focus shifted to the House of Vans where in partnership with Red Bull, the official after party got going with a solid selection of the fine DJs, combining grime, garage, electronica and more. With a line up consisting of Oneman, Preditah, Deeco and Elijah&Skilliam, plus headliner and Grime’s “next big thing” – Novelist, this was yet another event that’ll surely go down in Rebeljam history.

If you missed the live stream or just want to relive the event’s best moments, you can still catch all the footage on redbull.co.uk/rebeljam for the next seven days. The official Vans Rebeljam 2014 edit will drop on Vans’ channels and BMX’s finest websites on Tuesday 25th, and if you’re in London, you can still check out the 21 Years of DIG exhibition at House of Vans until Wednesday 26th.

VISIT: FRONT PAGE // DAILY SECTION // BMX COLOR APP // BMX VIDEOS
You are here: Home / BMX Videos, Products, News and More / Alex Donnachie Wins Rebel Jam 2014
Note: This site contains affiliate links and we could recieve a small comission that supports this site if you were to make a purchase on their websites using our links.