We have seen some interesting combinations with BMX riders mixing with different sports in the past and here’s one we were bound to see at some point. During a recent trip to Portugal, our friend Benedikt Bagger met Cris Santos, a Parkour wizard, and they ended up filming a few clips from a skatepark in Lourinha. It sounds kind of weird, but there’s some real solid riding and some of the stuff Cris does is actually pretty wild. Take a look!

“When Cristóvão Santos arrived at the skatepark in Lourinha, Portugal I honestly thought he’s a real bad boy but when we started talking it was clear that he’s one of the nice persons to be around. He immediately asked if he could help me film something because I was messing around with my tripod, trying to get a proper bank whip to 180 out. So I had the idea we could do a little feature together so I filmed a couple of clips of him, too. We actually wanted to get a few street clips of us both as well but because I was busy with learning to surf we didn’t get those. I hope you enjoy these 2 minutes of basically Portugal skatepark clips.” – Benedikt Bagger 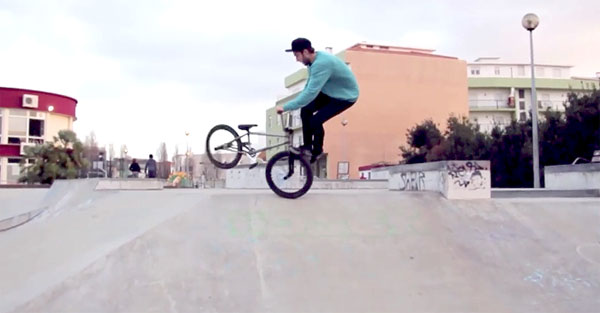