Now this is what it’s all about! Loading up with a ton of friends and hitting the road to ride spots and have a good time! Although this mostly covers just the riding aspect, it sounds like they had a ton of amazing times off the bike as well based off the text! Highly suggest you check this out!

“Since the beginning of Boicott, Ryan Davis has continued to follow a yearly tradition of bikes, beer, and camping. Every year more people jump in on the trip, adding to the already long caravan of riders and cars from all over North America. For many of the veterans who travel from as far as Alberta, Canada and Southern California this trip is absolute in their summer plans. Ryan has explained the many ways they have celebrated Boicott over the years, including a jam at the somewhat famous Slab City east of San Diego in the desert. With the change in surroundings from earlier days, Oregon has become the landscape for these trips. The amount of concrete that spreads across the state has no problems occupying 30+ people with thrills and chills all weekend, so for the past few years the annual trip has followed a loop down the I-5 corridor, cutting over the Oregon Coastal Mountain Range, and finding its way back up the 101 along the wild coastlines. Some of the highlights of this year included several awesome concrete parks, some of the best groomed dirt in Oregon, camping on the banks of the Umpqua River, Cold morning swims, Flabongos, Scary Skytracks and the east coasters who conquered them, Nick Vergillo laughs, beach front fires and phosphorescent shrimp, Matty Q Airs, free slurpy vouchers from the cops, meeting so many rad new people and the site of these small Oregon towns faced with a full invasion of dirty BMXers. With no serous injuries or trouble with the locals the roadtrip can be said to be a huge success.I’m already looking forward to what next year will bring. Another Boicott weekend in the bag..
Filming by Joe Loumena and Mark Rainha
Edit by Mark Rainha” – The Community Project 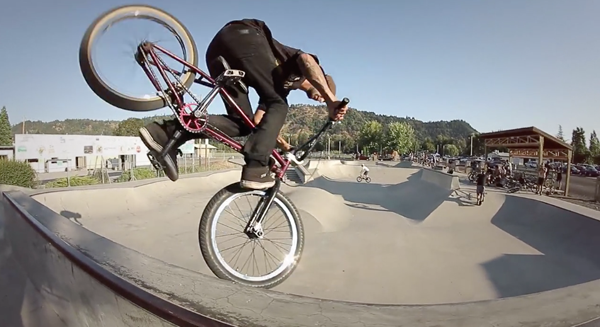