More sections from the Cult “Small Talk” DVD surfaced today thanks to Ride BMX! This time around we have phenomenal sections from Grant Germain, Joe Molina and a ton of the Cult connects from around the world in the friends section for you! Hit those play buttons!

““The classification between amateur and professional in BMX has been discussed and debated, but never clearly defined. While the lines are still a little blurry, if we can agree that a professional includes a paycheck and a certain level of experience and skill, then we’re halfway there. So what is an am? Does BMX even need ams? Cult thinks so, and they helped set the precedent for an established am class in BMX with the release of Small Talk, their am-based video that gave Steven Mack, Josh Alderete, Iz Pulido, and Andrew Castaneda the center stage usually reserved for the pro riders.

“Grant is a flow rider from Long Island who had spent the summer in California. We filmed a bunch of clips for the mix part, but then realized that with a few more clips he’d have his first full-length video part. Grant definitely worked hard for it, and I think it was a good experience for him to be a part of the project. He has surely grown a bit since he’s been riding for Cult.“” —Richard “Veesh” Krumm

““Joe is probably the most surprising part to me because he sent us a web video he filmed up in his Salinas, California, area, and as soon as I saw it I said, ‘Hold up, we need this in the video.‘” —Richard “Veesh” Krumm 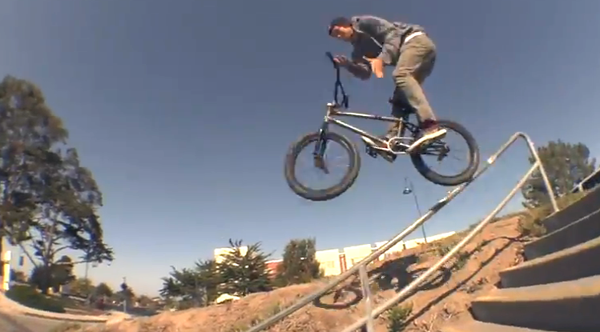