I was just thinking this morning that the past few days have been pretty damn insane with REALLY good videos dropping. I know some of you had missed a few of them or just want to re-watch them again, so I’ve gone back through the Daily Section and pulled out the best videos from the last few days for you to enjoy! Take a peek!

“The Vans BMX Team destroys the streets and beaches of Santiago Chile.

Music: “Full Moon at High Noon” and “Horse of the Gunslinger” by Nick Burke, and “End Down Under” by The Assemble Head in Sunburst Sound” – Vans

“Volume & Demolition team riders go to Japan to ride some amazing skateparks, crazy street setups and everything in-between. Watch Dennis Enarson, Tyler Fernengel, Kris Fox, Connor Lodes, Broc Raiford & Alex Raban killin’ it on Japanese soil.
Big thanks to Motocross International for making the trip a reality, and to all the shops’ hospitality we visited throughout our stay there.
Filmed and edited by: Mike Mastroni
Music: Alphaville – Big In Japan & Groundhogs – I Love Miss Ogyny” – Volume & Demolition

“Sometimes you have to be prepared to take a risk and journey down a path less taken. In this new edit, Corey Martinez, Bruno Hoffmann, Brian Kachinsky, Matthias Dandois and Anthony Perrin do exactly that and venture to South Korea’s capital – Seoul – a vast city of skyscrapers that tower above a dense maze of back alleys and streets below.

For eight days, the riders searched the city’s unfamiliar streets, in the hope of finding new and unchartered spots – they weren’t to be disappointed.

“Sam Jones in the streets of Scotland and Cyprus.
Filmed and edited by Dave Sowerby. Additional filming by Alex Donnachie.” – BSD

“Pete Sawyer, a name leading the charge in the UK BMX scene right now, recently took to the streets of London to film for his new Vans edit. Hitting up some of the best spots in town, Pete spent long days putting in the work to produce this hammer part.

Filmed over the course of a week by the legendary Mike King.

“What could be better than sharing his passion with his brothers ? Well, luck, destiny and the power of seduction from a little bike has provide this opportunity to french finest Kevin Kalkoff and his two younger « half » brothers Thomas and Enzo Benedetti to be gathered in one video by our director Hadrien Picard. Happy to have three excellent riders behind the wide screen of his Lumia, Hadrien seems to merge their specific talents into one super rider flowing through the news bowls of french and swiss alps where their heart belong. Look at this soft black and white moving feature along the delicate music of Luke Richards who will make you want to go out and find an hypothetical jazz club around the corner. Yes, bmx and trumpet are a perfect match. Watch and listen, it’s quiet enjoyable.”

“Mike Gray moved from Toronto, Canada to start a new life in San Diego, USA. At the start of 2014 Mike joined the Haro team and we helped him get an immigration visa to become a permanent resident. Mike immediately began filming with Christian Rigal for his first Haro part with the MARKIT homies and this is what they came up with. Mike is on the rise fast in the BMX scene and with a good attitude and positive outlook on life, Mike will be around for a while and we are so happy to have him on board.
Mike rides a 20.8” SDV2 frame
Follow Mike @mikegraybmx” – Haro

That is just some of the best videos from the past few days. You can see all the latest BMX videos, news, products and more in the Daily Section! You can also check out all of our latest Originals! 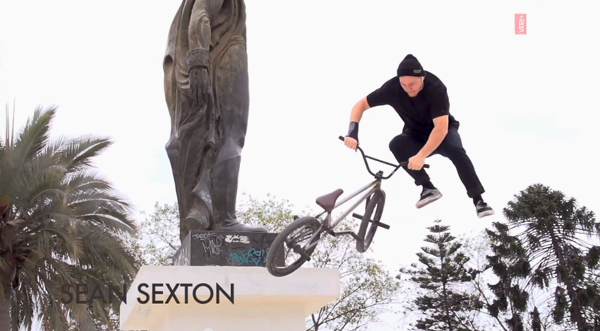