Time for a new pair of shoes? Now through Friday, every pair of shoes Etnies sells, they will donate a pair to the homeless! 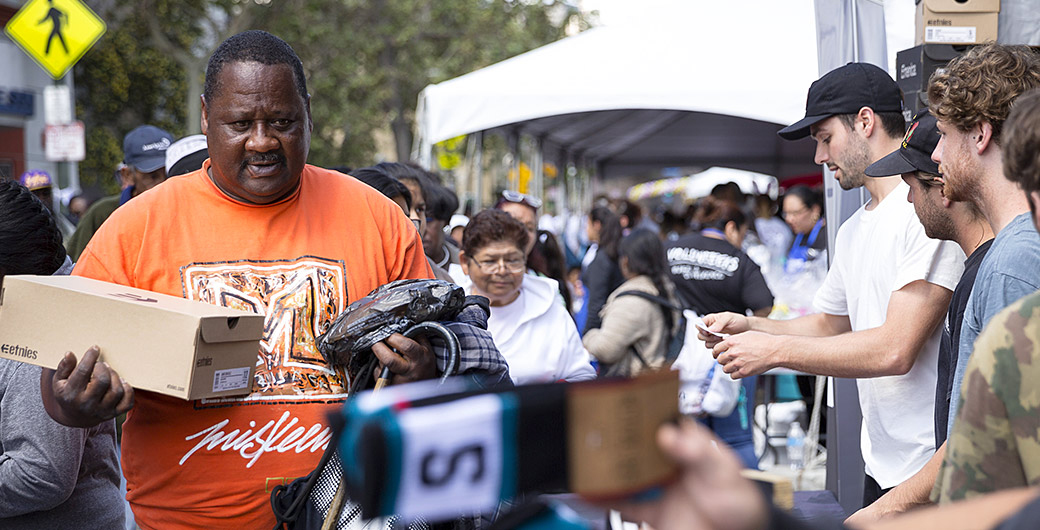 If you are due for a new pair of shoes, and you have been trying to find a way to give back to those less fortunate than you, this is the time to pick up a new pair of Etnies. Now through Good Friday (This Friday), every pair of shoes that Etnies sells, they will be giving a pair to one of the homeless in downtown Los Angeles. This is a program Etnies have been doing for 20 years now and they’ve given away 47,000 pairs of shoes. That’s pretty amazing. You can learn more about the program below, or you can head over to the Etnies website to pick out a pair or a few for yourself. Every pair you pick up, a free pair will be donated.

When etnies CEO Pierre-Andre Senizergues arrived in America to pursue his dream to skate, he found himself homeless on the streets of Venice, California. It wasn’t long before the skateboarder turned pro, but he never forgot his experience or lost his connection with people on the streets. That’s why etnies works each year with Los Angeles Mission to donate thousands of pairs of shoes to residents of Skid Row in downtown Los Angeles, the nation’s largest concentration of homeless people living and sleeping on public sidewalks.

“Even before arriving in LA, I shared the cobblestone streets of Paris with homeless people who had no other place to go,” Pierre-Andre recalls. “I gave them what I could – the sweatshirt I was wearing or other clothes – but I never could hand over my shoes. I realized then that we had so much in common, both dependent upon the streets and needing durable shoes to protect our feet. As soon as I could with etnies, I vowed to give back to the people who share the streets with skateboarders as a way of expressing our solidarity with them as neighbors and offering them some comfort and protection.”

Since starting the give-back program in 1998, etnies has donated 47,000 pairs of shoes worth $2.8 million in retail value. To fulfill this initiative, etnies partners with Los Angeles Mission, which has provided help, hope and opportunity to men, women and children in need for 80 years.

Starting today until Good Friday, for every pair of shoes purchased on etnies.com, etnies will donate a pair of shoes to the homeless at the Los Angeles Mission during their Easter event on Skid Row.”

Head over to the Etnies website to check out the latest styles and colors available now!

VISIT: FRONT PAGE // DAILY SECTION // BMX COLOR APP // BMX VIDEOS
You are here: Home / BMX Videos, Products, News and More / Etnies – Buy A Shoe, Donate A Shoe
Note: This site contains affiliate links and we could recieve a small comission that supports this site if you were to make a purchase on their websites using our links for no extra charge to you.