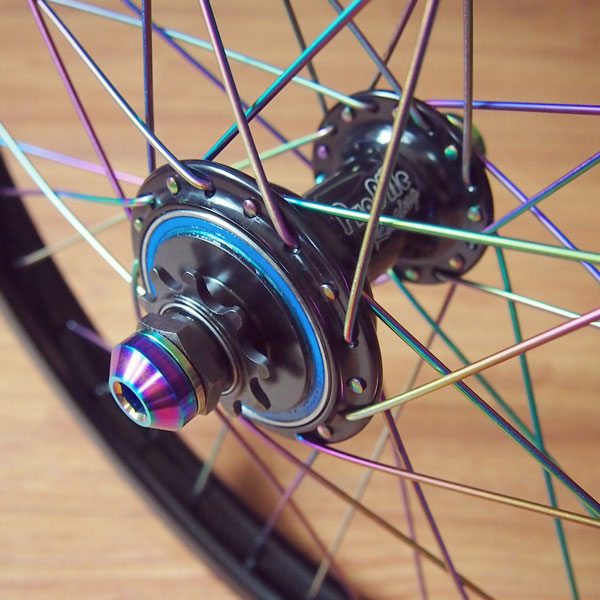 This morning, our friends over at TLC Bikes hit us up with two photos of a custom wheel that they built utilizing Profile Racing’s Z-Coaster with their Titanium spokes and bolts and an Alienation rim. As you can imagine, with the price of the hub and the price of titanium spokes and bolts, this wheel ended up being REALLY expensive, but REALLY nice. We don’t see too many brands offering Titanium parts due to the high cost of the materials, but a few brands such as TLC Bikes and Profile Racing still offer small parts like bolts and spokes for those of you looking to shed a few extra ounces off your bike. We figured you probably didn’t know TLC Bikes offer titanium spokes and bolts, so let’s take a closer look!

First off, let’s talk a little bit about Titanium. Titanium is a metal that, had it not been so damn expensive, would probably play a much bigger role in BMX today. In the early 2000’s there was a brand called RNC that made all sorts of Titanium products from small bolts to stems, pegs, sprockets and even cranks. At one point, Eastern Bikes even offered a full Titanium version of their popular Grim Reaper frame, the only downsides were that it retailed for $1,200, and, from what we heard, they did have flex issues that Titanium can be known for. Eventually the price of Titanium skyrocketed and it wasn’t feasible to offer larger BMX products in Titanium and RNC closed their doors and most brands offering Titanium products stepped away from the material as well.

The reason Titanium is such an awesome material is because when you compare Titanium and 4130 Chromoly, Titanium takes much less material to equal the strength of 4130 Chromoly. So let’s say you have a tube of 4130 chromoly and a tube of Titanium of equal weights, the Titanium tube would be either much thicker or much longer because the weight is lower. The only downside is that Titanium can flex easier than chromoly, so let’s say you were to build a frame. The tubing on the Titanium frame would be thicker than chromoly to avoid the flex, but still end up lighter than a full 4130 chromoly frame if done right. As you could image, a stem made from Titanium versus chromoly would be stronger and lighter.

But once again, Titanium is MUCH more expensive than 4130 chromoly making it less appropriate for BMX which generally focuses on younger riders with a tighter wallet than let’s say the 45 year old looking to get a titanium road bike frame with the money to spare for it.

Still, Titanium has its place in BMX and is still offered in small parts because it’s more feasible and an easy way to shave a few ounces from your setup. So let’s take a look at a few options TLC Bikes offer. 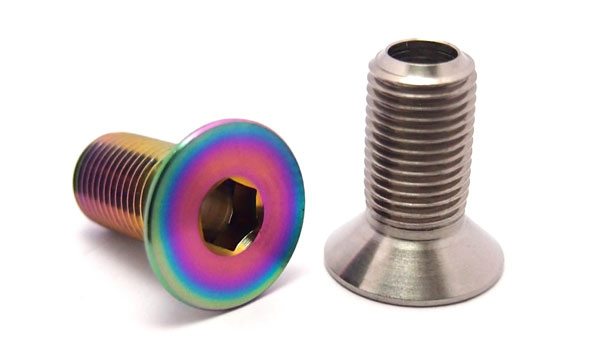 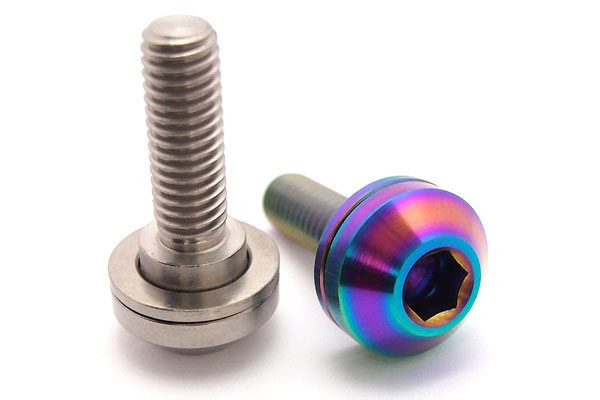 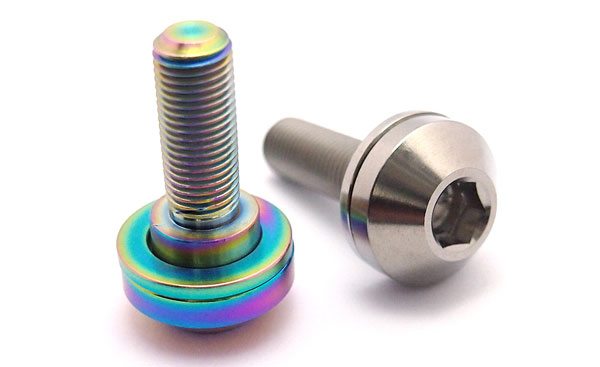 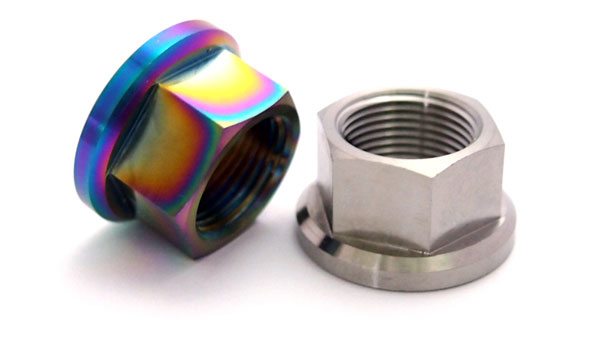 Nuts and bolts to fit female and male axles also made from aircraft grade 5 Ti-6Al-4V Titanium. They make a set designated for Profile Racing and Madera hubs and a Metric set for 3/8″ 24tpi thread such as Colony, Proper, BSD, Odyssey, Demolition, Halo, Shadow etc.. These however will not fit Fly or Wethepeople hubs. Available in Natural and Rainbow. 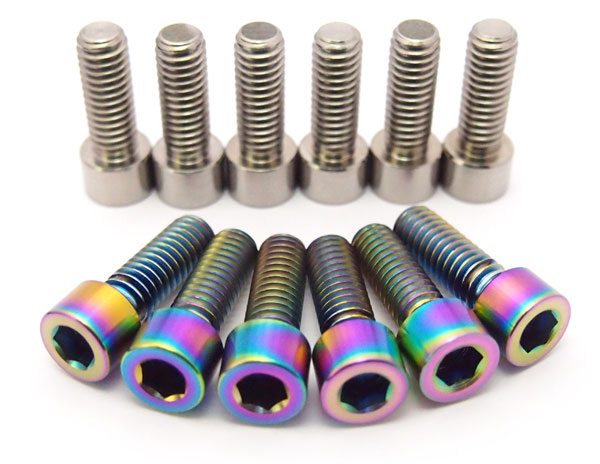 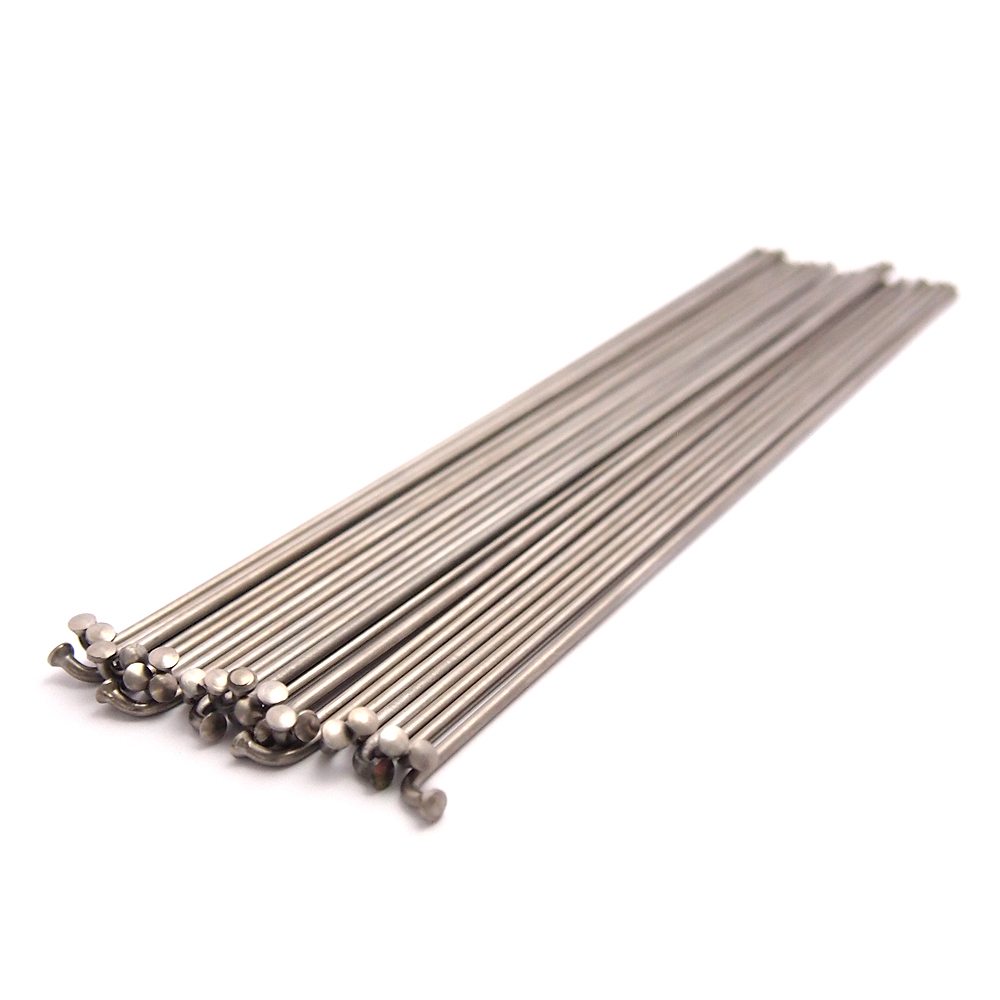 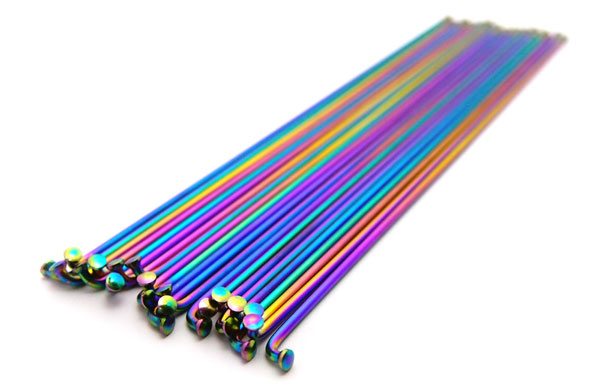 Want to really lighten up the rotational weight of your wheel? These 14g spokes are machined from aircraft Grade 5 Titanium. They’re about 50% lighter than steel spokes if that makes any sense and come in Natural and Rainbow colors. 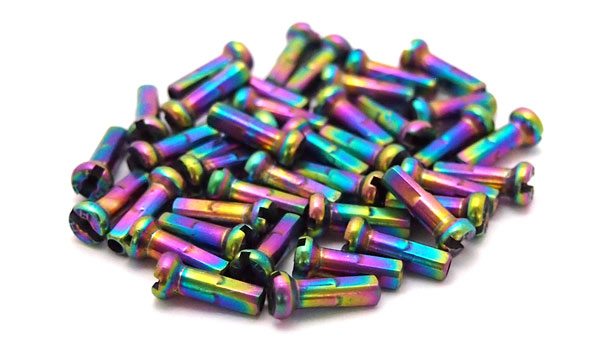 No, these spokes aren’t made of Titanium. They are made of CNC machined 7075-T6 aluminum, but they are available in the rainbow color to match the spokes. If you’re going to go that far with the rainbow colors, you might as well do the nipples, too. 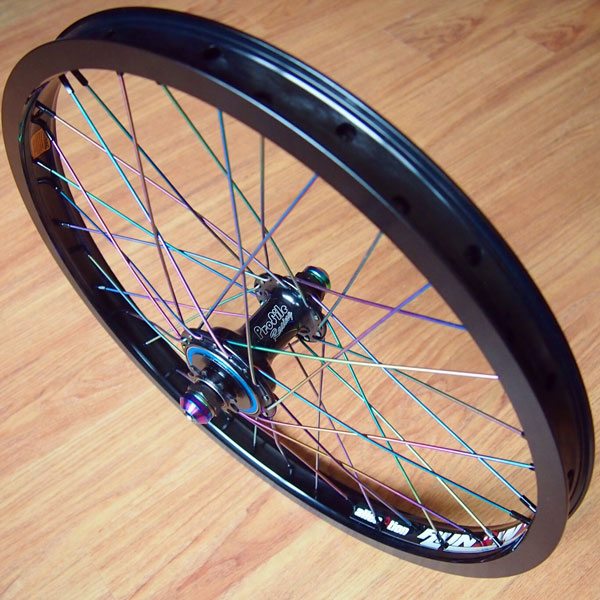 Here’s another look at the full wheel TLC Bikes built using Profile Racing’s Z-Coaster and their Titanium bolts and spokes and an Alienation rim.

Now, we didn’t put any prices with these because, well, we will leave the surprise up to those of you who want to check out the TLC Bikes webstore. Don’t be that shocked when you see the price… We did try to make it very clear this stuff isn’t cheap!

Check out the Forum!

You are here: Home / BMX Videos, Products, News and More / Product: TLC Bikes – Titanium Spokes and Bolts
Note: This site contains affiliate links and we could recieve a small comission that supports this site if you were to make a purchase on their websites using our links.