This is amazing. Red Bull had Fathead sit down with Robbie Morales, Matthias Dandois and Darryl Nau to ask them a few questions, which pretty quickly get off topic and hilarious pretty fast. If you’re looking for a laugh, then you NEED to watch these videos. Check out Robbie up top and the other two after the jump!

“On a usual basis you would see Fathead hassling contestants at events around the world… But for these interviews he pulled up a one-piece-suite and grabbed some famous faces from the VANS rebeljam party to sit down and shoot the stuff.

First into the leather was Robbie Morales – the original trailboss, owner and runner of Cult BMX. A massively influential BMX rider throughout the early/mid 90s – Robbie carved his own path in the BMX industry and also assembed one of the world’s best BMX teams Cult Crew. So a sit down with Fathead should’ve been the least of his worries…”

“Opinionated interviewer and BMX rider Fathead managed to grab a word with legendary announcer Darryl Nau before the VANS rebeljam contest kicked off.

Here’s Fathead to introduce you to the latest guest on his one-piece-suite;

Darryl Nau is well known in the BMX industry as the MC at all the major BMX events. With his sidekick Catfish in tow the two really do put on a fantastic show. He is host with the most, sending positive vibes out of your screens and answering every question with a diamond tipped wit! Darryl’s sweat pants stink of BMX so I delved in to find out more… Enjoy!”

“Fathead has found another victim to join him on his one-piece-suite; BMX flatland rider Matthias Dandois.

Get ready for clapping competitions, Brit/French rivalry and more probing questions from the charismatic Northerner.

Over to the host to introduce his latest guest:

Meet my little froggy friend from across the channel. Matthias Dandois is a fantastic character and a very funny French man. His riding capabilities are on another level – literally nobody does what Matthias does on a bike he will be spinning until the wheels fall off.” 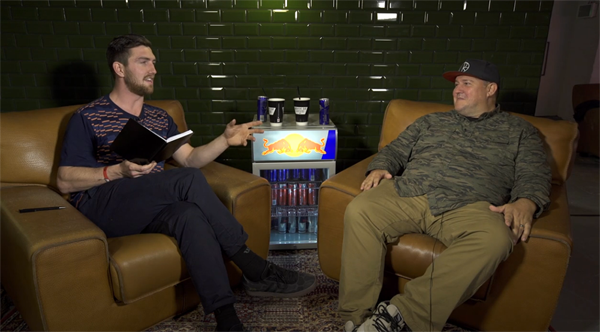