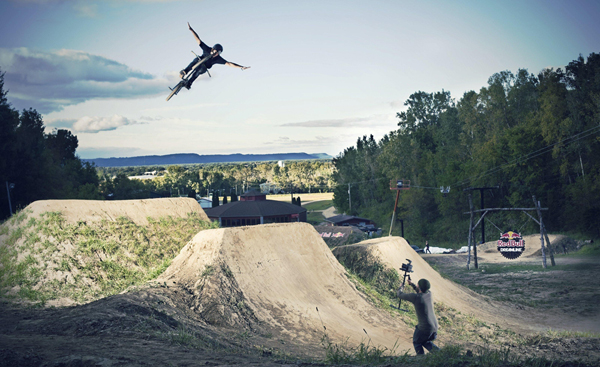 We’ve been hearing rumors that Dreamline was coming back for a couple of months now, and it sounds like they’ve finally set the date and location. Check out the official press release below letting you all know where things are going off this year! All I know is I need to make it to this since the first one was hands down one of the best events I’ve ever been to! Get stoked!

“THIS COURSE IS ON FIRE: RED BULL DREAMLINE BRINGS THE BEST OF BMX DIRT TO ANGEL FIRE, NEW MEXICO By the Riders, for the Riders Contest set in downhill resort

April 29, 2013– (Santa Monica, CA) – The once quiet, under-the-radar event of Red Bull Dreamline, originally held on private land in Wabasha, Minn. is rising again, this time in the resort area of Angel Fire, New Mexico, with a bigger course, bold athlete list and some of the most challenging jumps seen in any recent BMX history. On August 9-10th, 2013, the slopes of the mountain will be converted into a dream downhill BMX dirt course, with 1,500 feet of perfectly groomed hits made-to-order, descending down from nearly 10,000 feet of elevation.

The Red Bull Dreamline project was conceived by BMX pro Anthony Napolitan as way to showcase the best of what dirt riding can be. Given six weeks and complete freedom to develop and groom the course, builder Adam Aloise helped take contest riding to a new level. While some elements will be under wraps, they are promising a course that includes 12 hits with one of the largest shark fin features ever seen, and a jump that will send riders at least 35 feet in the air. Top names in the sport have already RSVP’d including Luke Parslow, Brian Foster, Dennis Enarson and Mike “Hucker” Clark.

The format of the contest has been developed to benefit the riders. On August 9th, 32 riders will compete in two heats of 16. The 16 athletes in the non-riding heat will judge their peers. The top four from each heat will be moving on to Saturday’s final and will be judged by a randomly drawn group of non-qualifying riders from Friday. There will be a two hour jam session for each heat.

While there is prize money up for grabs, the contest shines a light on what BMXers enjoy most about riding – the freedom of pushing the limits with their friends, on a course that has no rules or constraints. As Anthony Napolitan describes it, “Red Bull Dreamline is an event that BMX riders can show up to, ride, have a great time, progress, and feel completely comfortable without the pressures of a normal contest setting. This event was designed for the riders, by the riders and that’s why it going to be such a great success.”

*firsts invites were 2011 participants, more to be announced soon. Check www.redbull.com/dreamline for the next 5 additional riders to be revealed on May 6, 2013
Wildcard: A wildcard rider will be named from the top not-yet-invited finisher from Red Bull Dirt Conquers in Guadalajara, Mexico on May 25th

You are here: Home / BMX Videos, Products, News and More / Red Bull Dreamline Is Back!