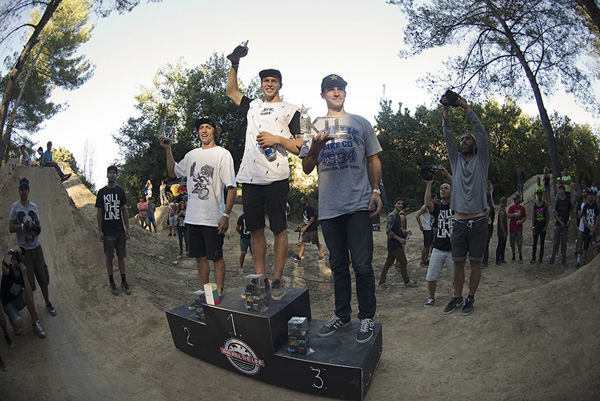 The annual Vans Kill the Line contest went down this weekend out in Peynier, France and it looks like Dawid Godziek took home the win! Check the press release below and expect plenty of footage to surface from this here in the coming days!

31st of August 2014 – Peynier, France. Dawid Godziek from Poland is the winner of VANS Kill the Line 2014. He convinced the judges with an amazing variety of hard tricks like a double barspin backflip, a triple truckdriver or a corked 720 combined with a super smooth style and perfect landings. The Brazilian Leandro Moreira placed second with a triple whip, superman nothing variations and his unique powerful style. Gentlemen rider and BMX legend Chris Doyle became third with his unbeatable 360 variations. The format was three runs with the best one counting. The “Riders Choice Award” went to wizard of AUS Corey Bohan. Winner of the “Best Train Competition” was again „Team Ridazz“ with T.J. Ellis (US), Leandro Moreira (BRA), Mike Saavedra (US), Daniel Juchatz (GER), Paul Langlands (NZ), Alex Landeros (US) and Jon Riddle (NZ). The German Daniel Juchatz was the lucky winner of the wildcard and made it to the finals.
More than 8.000 spectators witnessed 16 finalists out of 60 riders competing on the „Les Kills“ line in the pine woods with nine jumps. Some of the worlds best dirt riders came to the legendary Peynier Trails in the South of France and went for an overall prize money of 7.000 Euros.
Definitely a highlight of the weekend was Ryan Nyquist (US) trying to pull a tree -sixty nose bump to bars (literally) and eventually pulling it.
The most relaxed trail contest of the season with perfect weather conditions, is organised by the BMX Peynier association – namely the BMX legends Alex Dropsy, Berenger Guilb Cordier, Bibi, Nicolas Beou Bertier and Cedric Pouky Carrez – and an entire village of volunteers. It was judged by head judge Dave “Hank“ Cleworth (UK), Axel Jurgens (ARG) and Patrick Haebig (AUT).
Thanks heaps to VANS Europe, Sosh™, GoPro, FUSE Protection, Roure Automobiles and to all volunteers, riders and helpers making this event possible. For more information check: HYPERLINK “ww.facebook.com/vanskilltheline”Facebook, and follow @vanskilltheline on Twitter and on Instagram”

You are here: Home / BMX Videos, Products, News and More / Vans Kill The Line 2014 Results
Note: This site contains affiliate links and we could receive a small commission that supports this site if you were to make a purchase on their websites using our links for no extra charge to you.