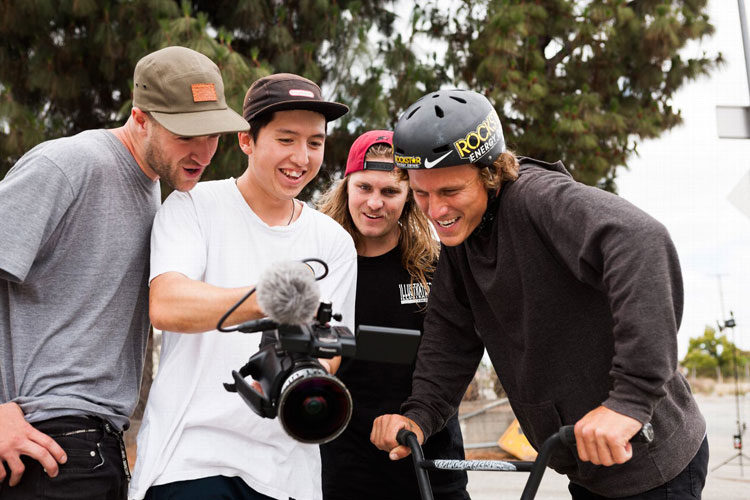 If you have been keeping up with the constant flow of BMX videos these days, there’s no doubt that you have started seeing a name that has been constantly popping up in the credits for videos featuring riders like Chad Kerley, Dennis Enarson, Kevin Peraza, Devon Smillie and more. That name would be Doeby. It seems like his name is constantly popping up and that’s awesome because he’s been producing some amazing BMX videos that do not disappoint. We’ve been really stoked on his work, and we realized we really didn’t know a whole lot about this guy that is always Tweeting about food, so we figured it was time we hit him up and get to know him a little better. Let’s see what he had to say and check out some of his latest work!

What was it that first got you into BMX? Any sort of memories come to mind?
Seeing X-Games on TV was what gave me the spark to get into BMX. Growing up, I was the typical Nerd (still am). I was around 12 and I learned how to pedal a bike that year. I wanted to do something cool, so when I saw BMX on TV I knew that is what I wanted to do. It still hasn’t made me cool though, Haha. Oh well.

What about filming and editing? Was it something you got into through BMX or was it something you were into before the two ever came together?
Yeah, filming and editing was something I got birthed into thanks to BMX. Honestly, it wasn’t something I wanted to do. I was hurt at the time and was the fat kid of the group, so I was blessed with camera duties. I developed a passion for it down the line after I made a few videos. Now I love it. I’m thankful things happened the way it did.

Haha, that fat kid in the group… In the past year it seems like you have been popping up all over the place with different video projects. Was it ever your goal to be a full-time filmer or did it just kind of happen?
It became a goal eventually when I didn’t want to live off the $1 menu anymore. But no, it wasn’t at first. As my passion for filming developed, I knew I wanted to be filmer.

I swear you have fired out a unreal number of really dialed edits in the past few weeks like Kevin Peraza’s new Mongoose video and Broc Raiford’s latest for Dan’s Comp. How many different videos do you think you have done in the past year?
Thanks. I don’t really count how many videos I do, haha. I just try to work on as many projects as I can throughout the year. I like to film the best I can whether it’s for instagram or video part, so I don’t try to fire out too many videos. As long as I can stay focused and put out videos the best I can, I’m happy.

Being based in Southern California has its perks with so many riders to work with. Who was the first rider you filmed a legit video for?
Living in California is a blessing for sure. Having weather that allows you to ride all year is the best. But just living here and owning a camera, doesn’t mean you get to work with whoever you want, haha. My first legit video was with Albert Mercado.

Who are you currently working with on projects? Any hints at what’s coming?
I’m currently taking a little break, but I do have a few things lined up this year. I’ve just been filming around locally with Christian Rigal, and Gary Young lately.

Who are your top 5 favorite guys to film with? Any reason why?
I really can’t answer that. Haha. All I can say is that all the guys in San Diego are my favorite people to work with. I love SD. It’s awesome to have so many dudes out here that are so well rounded, and being able to film everything. It’s always a good time when you can just session around with your friends, and randomly be able to stack clips.

Is there a rider that you haven’t had the chance to work with yet, but really want to make happen?
Theres too many to name! Haha. I would love to work with dudes like Jake Seeley, Garrett Reynolds, Alex D, Kriss Kyle and Dan Foley.

Do you get into video projects outside of BMX at all like weddings or anything? I feel like you might have a secret food vlog with all of the food related tweets you fire out.
Haha, there are a few things I work on outside of BMX, I just don’t talk about it or promote it. I do love food. I would love to make a food channel soon, but I’m just lazy. 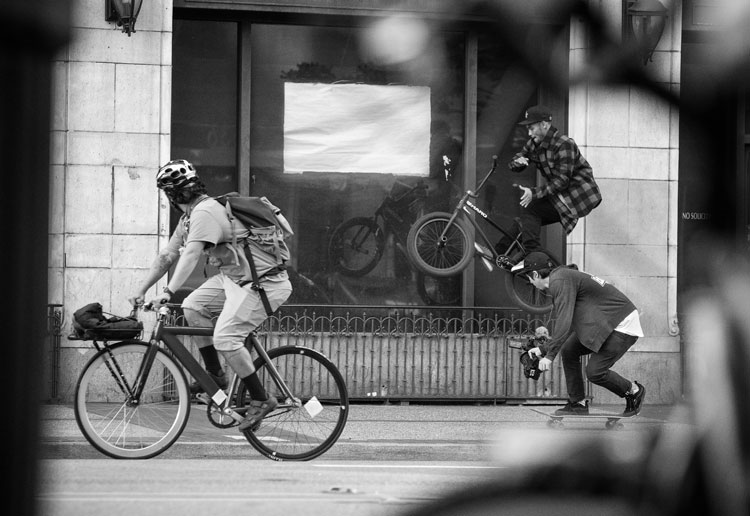 Did you ever go to school for film work at all, or has it all been self taught?
Honestly, I wish I had the opportunity to go to film school. It’s mostly self taught, but anytime I need help I reach out to Film Gods of BMX , and thankfully they have helped me out a ton!

How important do you feel school is for something like making videos and everything?
I feel like you can always make anything out of something. It’s all about working with what you have available. If you have an opportunity to go to school, I would say take it. I don’t think school is necessary for filming BMX, but it would help a ton in camera settings and post production.

Who are a few of the filmers that you’re really into these days? Where do you get most of your inspiration for projects?
I love the work of Dave Sowerby, Mike Mastroni, Christian Rigal, Darryl Tocco and Tony Ennis. Growing up I was heavily influenced by all these guys! It’s crazy I get to call most of these dudes my friends.

What was your first camera setup when you started out?
I started out with a Canon GL2. I hated it, but it worked and it’s all I had so that’s all that matters.

What are you working with for a setup these days?
I’ve been filming with a Sony NX100 as my main camera. For second angles, I use a Panasonic G7. Other than that I use a fluid head tripod, and a Glidecam if necessary. Also snacks, always bring snacks.

What are you doing all of your editing on?
I edit on a Macbook Pro using Final Cut Pro X and Adobe Premiere and After Effects

Do you have a dream setup as far as cameras, gear, computer, etc. go? What would you be working with if you could afford it?
For Now, I’ve been wanting a few DVX200’s and a better fluid head tripod.

What’s the weirdest thing somebody has asked you to film? Did you do it?
Some dude I asked me to film him working out, and of course I said no…

I know you mentioned you were taking a little break at the moment, but are you up for other jobs right now? What’s the best way to get ahold of you?
I’m always open for ideas and to work on projects. The best ways to contact me are through Email – doeby.huynh@gmail.com and Instagram – @doeby.

What kind of advice do you have for the guys who are just starting out with making videos?
My advice would be to work with what you have, and make the best out of it. You don’t need the best to make the best. Also, film as much as you can! The best way to learn is to just go out here and do it. Don’t be afraid to reach out to people, the worst they can say is “No”.

Do you have any shout outs or thanks?
Thank you to BMX! BMX is great, fuck y’all who thinks otherwise. I would like to thank Henry at East
County BMX for everything and holding it down for the bmx scene in San Diego. Everyone who has trusted me to work on a project with them. Barthalomou the Gawd for being the best dog ever and Albert Mercado, sometimes.

Anything else you want to say?
AGE IN BMX SHOULD NOT BE A THING. No matter how old or young, everyone deserves respect. No one should discriminate on age, if you can ride a bike that’s all that matters. I feel like there has been way more salty young dudes than salty “old” guys lately. Fuck everyone

Not too many BMX filmers can say they have an X-Games medal. Doeby ended up with a Bronze medal for his work with Dennis Enarson on his “Real BMX” part.