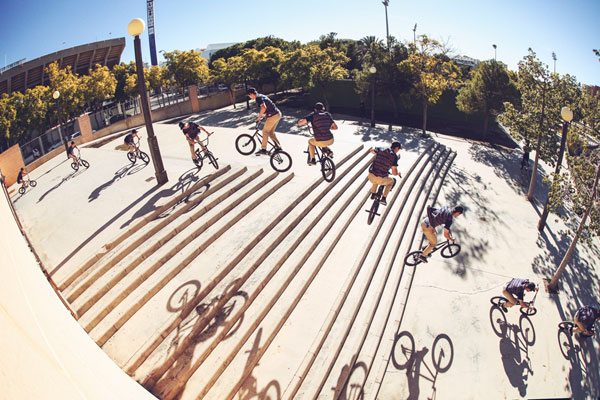 There’s always a pretty steady flow of new BMX talent coming out of the United Kingdom. Recently, we’ve been seeing a name popping up that has really caught our attention. Some of you might be familiar with Jordan Godwin from some of the videos he has popped up in over the past few months where he was absolutely crushing it. After his latest Dark Side of the Goon video dropped, we knew it was time we needed to get ahold of this guy and find out just what he is all about! Let’s see what he had to say!

Jordan! What’s up? How’s things going on your end?
Yeah, all good here. The weather is finally getting better, so I’m getting out and riding a lot more, now that the rain has stopped.

What’s new with Proper Bike Co. these days? Do you have any special projects cooking with them as far as trips, videos or signature products in the works you can tell us about?
Nah, it’s all pretty chilling at the moment. I think there are a few ideas being thrown around with trips, but nothing confirmed yet. With parts though, I don’t have any signature stuff, but there is a load of new stuff dropping this year that all looks sick. The samples are holding up strong as well, so look out for that !

How are things going with Éclat? Anything brewing there that you can tell us about? Any trips or anything coming up?
Pretty much the same there to be honest. Everything is chilling at the moment.

Your clips in the Éclat “Young Bloods” video were absolute fire. How did you feel that video came out? What did you think of Alicante, Spain?
Thanks, dude!! I’m so stoked how it came out! Shout out to media guys, Cal Earnshaw and Fooman for killing it behind both lenses. It was sweet to hang out with Sam and Harry and to watch them both ride. It was a real treat and I look forward to the next trip with those guys! Also, Alicante is so much better than expected! The place is unreal… There are spots on spots!

What about Crucial BMX and Adidas? Do you have anything going on with those guys that you can tell us about?
Well, I wanna get started on a Crucial edit at some point soon, but it’s just finding a time when Scott from Crucial and I are both free. It is a struggle, so it could be a slow process, haha. Nothing with Adidas right now, though.

Alright, so, you have been popping up more and more lately between projects with the sponsors and the D.S.O.T.G (Dark Side of the Goon) crew. What’s the story behind that crew? How did that name come about?
I actually had nothing to do with it at the start. It was all because I’ve seen a preview for this video called “DSOTG” that two of the locals, Rob Harris and Oli Aitken, had made. I instantly wanted to be apart of it, so I just started riding/filming with them more and more and then eventually we got two more people in on it, Jeran Griffiths and Alex Evens. So, we decided to finish the video and last December we released it. After that, I guess we just established our selves as the DSOTG crew and we are always out filming for new stuff now. As far as the name goes, I really don’t know. Rob came up with it and that was that, haha. I guess he just copied it from Pink Floyd, the album “Dark Side of the Moon”. It’s not the most original name, I know, haha.

You have a video for those guys that dropped the other week. Have you been filming for anything new that we can expect to see pop up online any time soon?
Allllwwwways filminggg. I’m just gonna keep filming until I have a good amount of clips for a web edit… We’ll drop the edit and then repeat the process. I hate sitting on clips. Rob has got a DSOTG edit dropping within the next month, so keep your eyes peeled for that! I can promise it will be fire, haha. 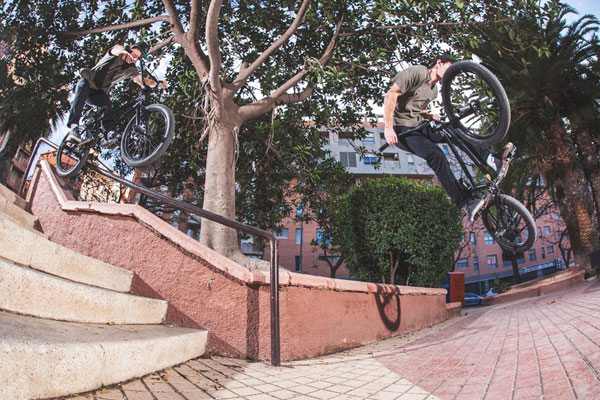 You’re from a pretty small town in Wales, right? What’s the scene like there? Is there much to ride or do you find yourself hitting up other places to ride?
Yeah, dude, it’s sooooo small. We have 3 rails to ride and that’s about as far as street spots go, haha. On weekends we have two good cities to go to, Bristol and Cardiff. It’s only a short train journey to get to either of them and the scene’s are strong in both cities.

Where are you usually found riding these days? Any new spots you have been real into riding lately?
During the week I’m at the local skate park and the weekends, at the moment, I’ve been spending more time in Cardiff riding anything I can find.

Word on the street is that you rode Motorcross for a long time before BMX, right? What made you want to make the switch? Do you feel like having that background has been a help when it comes to your riding now?
Yeah, that’s true. I rode motorcross from the age of 6 up until I was 14 or 15. I made the change because my dad left my mum and me and my mum couldn’t afford it anymore. I was always messing around on a BMX bike at the races, so it seemed like the next best thing and it kicked off from there. I haven’t looked back since. Yeah, I do feel motorcross has helped in some ways, but it is completely different. It’s hard to compare.

Who were some of the guys who really influenced your riding when you were first starting out?
SCOTT DITCHBURN !!! His hard 3’s are the only reason I learned hard ways, haha. That answer also goes to show how far I can go back in BMX… Not far.

Who are some of the guys that really get you motivated to ride these days?
All of the DSOTG homies are always good times. Then guys like Simone Barraco, Devon Smillie, Alex Donnachie and Ty Morrow. Any edits by these guys are the best way to start your day!

I know you recently spent some time in Spain. Other than that, have you had the chance to travel much because of BMX? Any where in particular you haven’t been but really want to go to?
I’ve been to Barcelona twice, once with the Crucial guys and once with DSOTG. BCN is mad! I definitely haven’t traveled as much as I’d like to. I really would love to go to Tel Aviv. That place looks RAD!

What do you think you would be doing these days if you never got into BMX?
I have no clue. I’d probably be doing nothing or an alcoholic… Just a waste of space basically, haha.

What are you usually getting into when you aren’t riding? Any hobbies or things you’re also good at?
Listening to music and just chilling with friends. I usually always have my bike with me. Everything is more fun with your bike. I also like eating large amounts of chocolate, haha.

We heard you’re pretty superstitious. What are you superstitious about? Anything you do that might seem OCD like Ben Lewis does with rails?
Not so much OCD, but if I’m doing something on a hand rail, I try to only take 3 run ups. Otherwise it usually goes wrong. I have a St. Christopher neckless and I will not do anything unless I have it around my neck. I always salute to magpies and never walk under ladders. I won’t stand on a crack in the floor and never walk over 3 drains in a row, haha. It’s a bit odd. 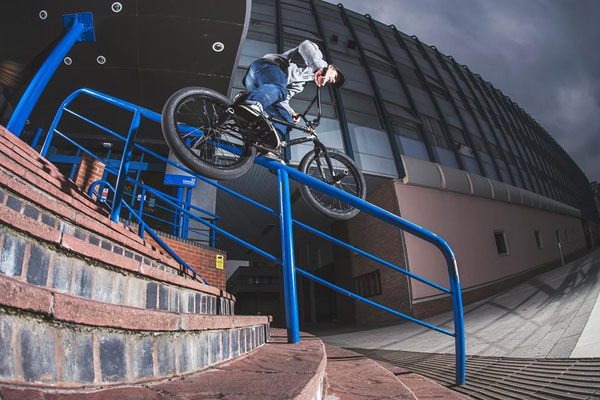 You’re still pretty young, but do you have any idea of what you could see yourself doing for a living further down the road other than BMX? Any dream jobs or anything like that?
No dream jobs, really. Anything that’s fun and gets me by.

Let’s say you won the lottery and had a huge load of cash to burn. What’s the first thing you buy?
buy?
A new rail for the local because ours snapped like a year ago and hasn’t been fixed. A skatepark is nothing without a good rail. I’d also give my mum a few G’s for putting up with me, haha.

Where do you see yourself in five years?
Who knows. Riding my bike and doing the same stuff I do now, I guess.

What’s the last song you heard and movie you watched?
Last song was “The Recipe” by Ab-Soul and Jay Rock featuring Kendrick Lamar and Schoolboy Q. The last movie… I have no idea but the last thing I watched on TV was Family Guy about 10 minutes ago.

How can people keep up with you these days?
Instagram is @jordangooodwin or @dsotg

Do you have any shout outs or thanks?
Yeah, shouts out to Scott at Crucial BMX, Jamie at Proper Bike Co. / IMG Distro, Mark from CSG distro, Paul at éclat, Adidas. Also, Fooman because he introduced me to the majority of the list above. Obviously all the DSOTG dudes, Cam Wheeler and Max Higginson. Shout out to you guys for letting me do this interview!

Anything else you want to say?
HAVE FUN!

You are here: Home / Interview / Jordan Godwin Interview
Note: This site contains affiliate links and we could recieve a small comission that supports this site if you were to make a purchase on their websites.