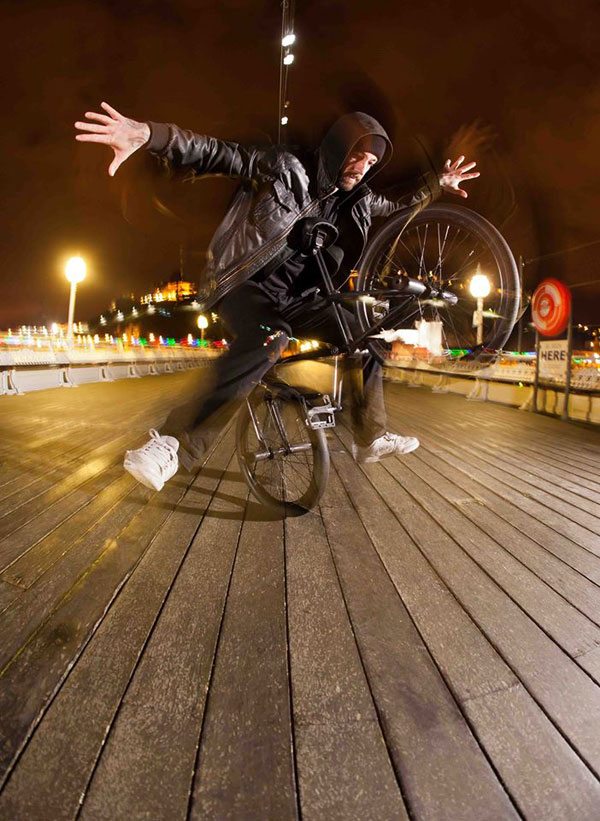 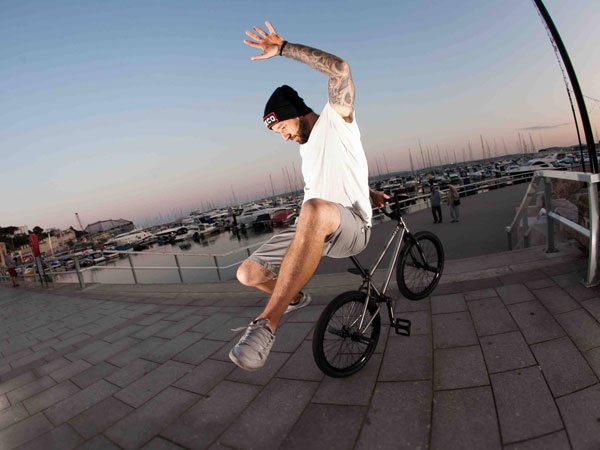 What was it that first got you into BMX? Any early memories come to mind?
Dad brought me a gold beast home one day and I was hooked.

Lee! How’s it going? I’d imagine you’re psyched for some nice weather over in the UK?
Hahaha, yeah, nice to ride outside for a change.

Let’s go straight to how this came about. We have been following you through your videos for quite a while and are always so blown away. Do you get pretty motivated by filming or is it just something you like to do to keep up with the progress?
Thanks. No, I hate it, haha. I’m not into the self-filmed tripod stuff a lot of flatlanders do these day, I can see the benefit for just getting something hard on tape, but I want stuff filmed well so it looks cool, and I don’t have to strain my eyes to see it, haha. With being filmed comes the stress of having someone chase as well as having to hit something really hard, but it’s worth it when you get it good and have it forever to look back on.

After all these years, do you ever feel like your level of progression has slowed down at all? It seems like you’re still inventing new tricks like the Spider Glide?
Not the level as such just the time I’m able to ride, both physically on my body and the amount of hours I can dedicate daily with other life commitments. I actually invented that trick like 10 years ago or something like that, but I brought it back recently because I realized I didn’t ever film it and I wanted to take it to the next level as well. There are still a tons of moves I’ve got in my head that are yet to be invented, though.

Speaking of the Spider Glide, you’re in the Guinness Book of World Records for that trick and one other one. Care to tell us a little bit about how those opportunities all came about and what you are in there for?
Yeah, the record is for the longest distance rolled in it. I was asked to set a new record so I went for that. They set a distance of 10m to break I did 14m, they acccepted the record but wouldn’t sanction it fully because I didn’t have a surveyor present to prove the floor was level, haha. I’ve been asked to do it again for TV, so I might do that later in the year. I only did it for fun really, though. The other record I have is for most no handed spins in a minute in a death truck.

Do you have any other ideas that might get yourself a 3rd?
Yeah, there are all sorts. It’s hard getting the permission to set something new though.

Actually, how the hell do you balance with your hands and feet off like that? I can’t figure it out for the life of me.
Haha, well it’s not easy and it hurts. You can only practice it for a certaint amount of time a day, but basically it’s pressure between two points then just learning how to balance like that. It feels real cool like floating, haha.

I know you have competed a fair amount over the years and taken some titles. Are you planning on hitting any contests for 2015 that you are getting excited about?
It’s always in the back of my head to show up at a comp some where for the challenge to see if I can pull my moves under pressure, the riding I’d like to do in a comp doesn’t lend itself to the conventional comp formats though. I’m not into doing a load of spins and or simpler moves for consistency or to pad out a run or battle. I do that in shows. In a comp I want to do the hardest most original moves I can and they are often hard to pull every time. I’ll battle anyone in a hardest trick comp though… 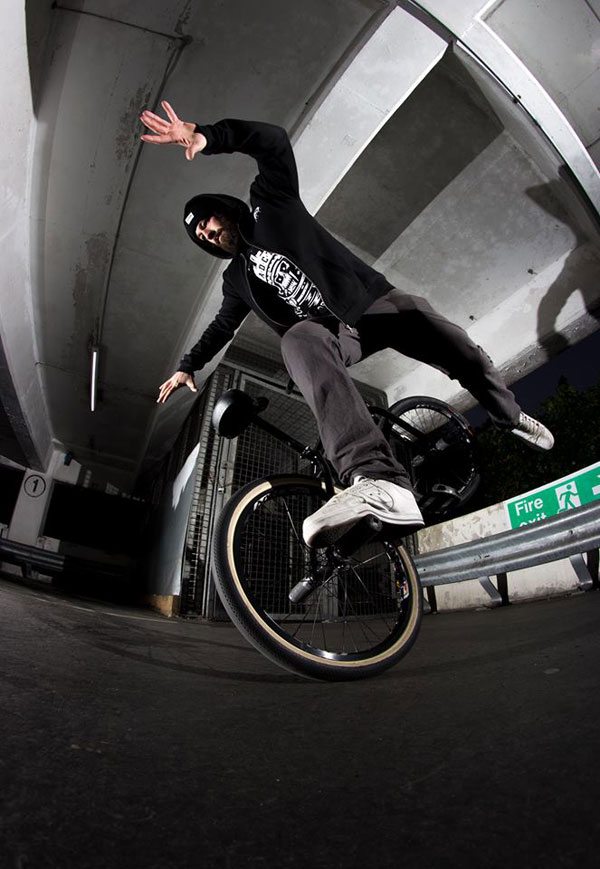 You spend a lot of time doing shows, right? What’s Inspire Shows all about and how often are you doing something with that these days?
Inspire shows is my events company. We do events and school tours all year round. I book, organize and over see nearly all shows. I try to do as many of the Flatland shows as possible but we provide many different types of shows for clients. For me riding shows is fun but also work, I do a lot of spins and moves that are consistent for any surface in shows. But I do completely different moves when I’m riding at home. It’s like those are two separate aspects of my riding but they merge to some extent when I get a good show area and try and push myself.

Is that all you’re doing for work? Seems like that keeps you plenty busy.
Yeah, I run it full time. I have done that for 10 years or so. I also dabble a little in property investment.

Alright, so you just had a banger of a video that dropped couple months back and I know you stay pretty consistent with filming. Are you working on anything new we can expect to see soon?
Thank you. Yeah, Nick Wotton and I worked on that for 6 months. He was so patient filming for hours on end. There were loads of moves I couldn’t hit for camera. The idea behind “Seminal” was to put down the foundation of my riding and portray how it’s mostly built around tricks I’ve invented. The next thing we are going to try and put out is just a one move edit. I’ve spent maybe 2 years trying to turbine the spider glide (make it spin backwards and forwards). I want to documenting the challenge/struggle it took to take that move where I wanted it to go. I’ll hopefully put that out later this year if I can get it on film the way I want.

What’s your travel schedule looking like? Any trips you really want to make happen this year that aren’t for sure?
I fly out to the isle of man for the TT races next week then I have just got Loads of events and school tours across the UK. I’d like to go to the Flatark comp in Japan at the end of the year since that looks awesome.

Who were a few of the riders that really influenced your riding over the years?
The key person was Paul Tout who I rode with everyday for the first 5 years. We pushed each other to try to be as original as possible. We had loads of rules like how we couldn’t do the the same trick as each other and how combos should flow. I think that shaped how I think of riding as like a creative outlet. I’m always inspired when I see anyone do anything creative though no matter what area its in.

What about these days? Any guys in particular that really get you motivated to ride?
Yeah, flatland is always evolving, so if someone brings a new concept to the table it really motivates me to keep on doing my own thing and reinforces the fact that there is so much more to do.

Have you ever in your 20 years of riding found yourself kind of burned out or over riding? How do you keep things fresh for yourself?
Yeah, 5 or 6 years ago, I stopped regularly riding for about a year. I felt I’d achieved a good amount and I didn’t fit in to comp scene anymore. Flatland had become a segregated form of BMX. As a whole, the events were no longer about showcasing the latest moves you had been working on all winter and were just about pulling tricks consistently. It really burnt me out and I felt I no longer belonged or wanted to be a part of it. I still ran shows in this time though and my passion was kind of reignited by them. If you like finding another avenue or reason to ride, I learned loads of spinning moves just for shows, but soon realized it was the creative element that I still loved and I just fell back into that and doing my own thing and the challenge that comes with that is what keeps me motivated now. 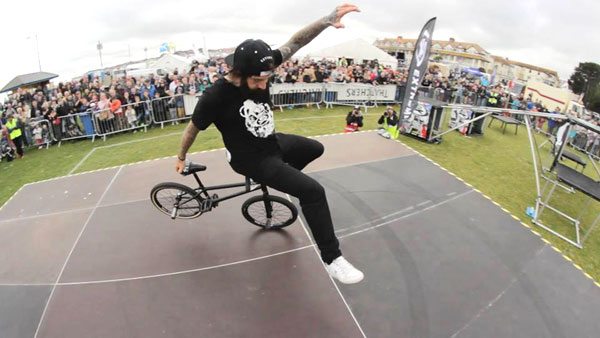 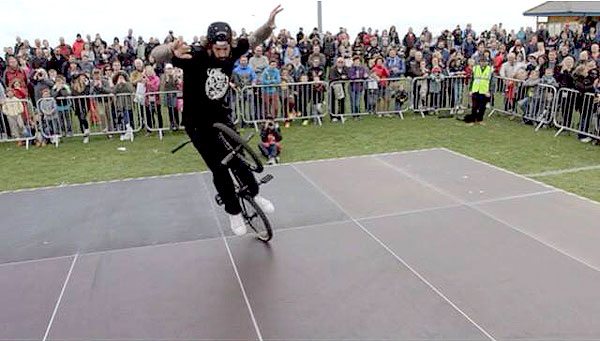 I’d imagine it’s hard to figure out, but what do you think you would be doing today if you never got into BMX?
Hopefully something creative, but I honestly have no idea what.

What are you usually getting into when you aren’t riding or working these days?
Just spending time with the family. I have a hot but demanding misses, haha, and an equally demanding 11 month old little girl and a hyperactive black pug called Venom.

I noticed you have a lot of tattoos. How long have you been working on them? Do you have any favorites in particular? Any plans on more?
Yeah, I have a few but they all merge into one piece. I’ve been working on them 5 years, maybe more. It’s a constant working progress with a lot more to go. The Baku on my arm and shoulder is prob my favourite. It’s a Japanese dream stealing dragon.

What’s the key to a proper beard? We know you have a few tricks.
Hahaha, ignore people if they say you look homeless, haha.

Where do you see yourself in 5 years?
Supporting my family, hopefully still riding and there are some big plans in place for other stuff, but thats on the DL for now! 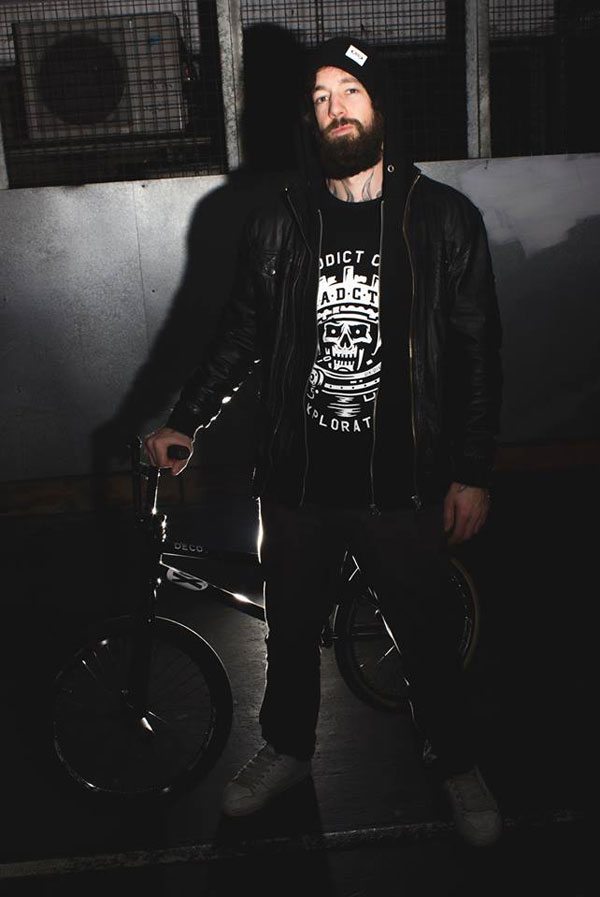 How can people keep up with you these days?
Mostly try to link every thing up with Instagram. It’s easier that way as I’m always on the go its: @lee_musselwhite but also please hit me up on any of the below:

or my sites for more info:

Do you have any shout outs or thanks?
Yeah, thank you for this opportunity, Kurt. Flatland often gets over looked in BMX, so I really appreciate you taking the time to interview me. I feel honoured. All my sponsors for supporting my ideas and my family and friends. I love you all.