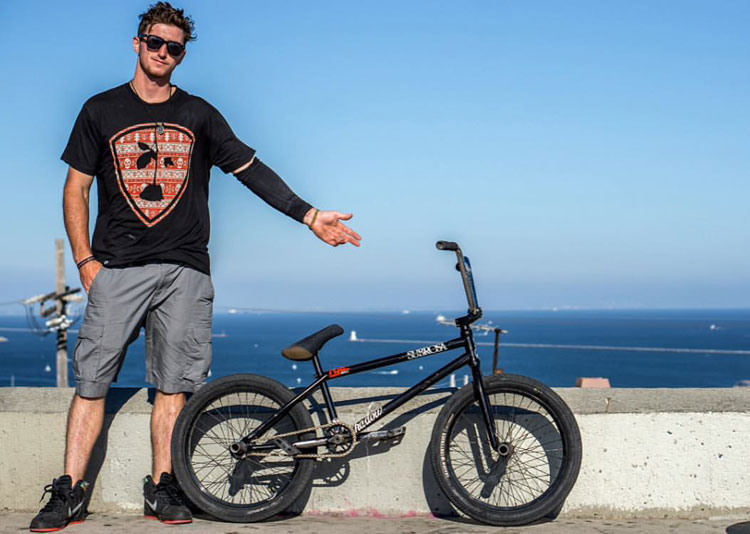 It has been a while since we last caught up with Matt Ray. Since we did that interview, things for Matt have changed up pretty heavily. As most of you know by now, Matt was recently given the well deserved bump on up to The Shadow Conspiracy and Subrosa Pro teams after crushing it for years. Add in that he has been working on some cool projects with Clif Bar, putting in work at college and more, we figured that was more than enough reasons to hit him up to see what’s new! It’s safe to say Matt has been on fire lately. Let’s see what he had to say.

Matt! Long time no talk. How’s it going? It seems like you have been plenty busy lately!
Yeah man, it’s been a while! I’m doing good just getting ready to deal with a New England winter at the moment, haha.

I feel you on that one. Minnesota winters suck, too. Last week your Welcome to The Shadow Conspiracy Pro Team video dropped and it’s safe to say it blew people away. How long did you work on that project for?
Oh man, I’m so psyched that dropped! The past year we have been traveling all over filming for that. I think we filmed in 4 different countries for it, which was crazy to me because I have never really worked on that big of a project before. I’m really happy with what Chadwick did with the footage, and how it turned out.

Did you go into the video with anything on your mind you wanted to make happen specifically for this video?
I definitely had some tricks in mind that I was hoping to get done. Luckily we went to spots that made them possible and they worked out. I like just riding new spots and thinking of something I think is cool to film. It gives me an excuse to work on tricks that otherwise seem impossible, too. 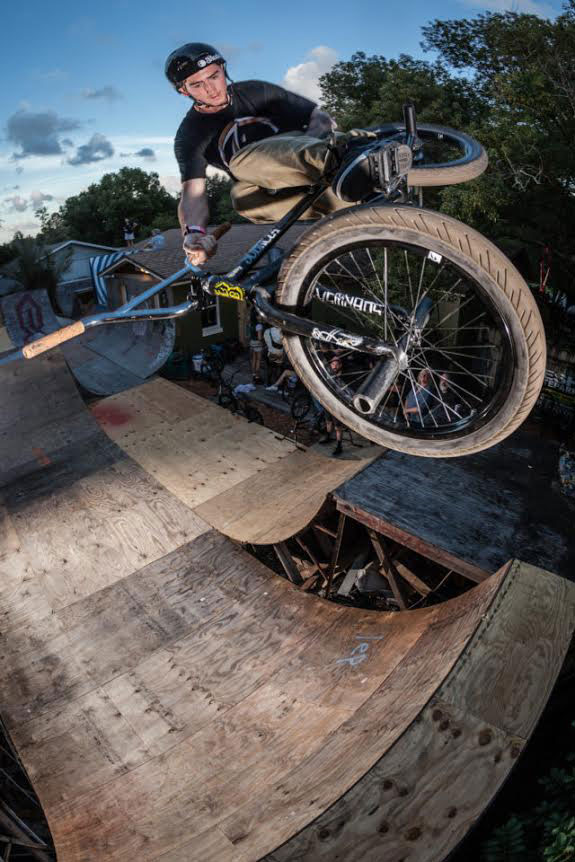 Out of that whole video, do you have any favorite clips? Any good stories from filming for the video that we wouldn’t know just watching the video?
There was one trick I tried for the first time in Arizona and couldn’t get it. I came back to Boston, and got it the next day, so I booked a plane ticket right back. I took only a small bottle of water into the Arizona summer thinking it’d be a one and done. Eight hours of filming later, I ended up in the hospital suffering from dehydration and exhaustion to the point my kidneys were on the verge of shutting down. I left against the doctor’s will to catch a midnight flight back to Boston. After only two months of specialists and doctors, I was back to normal, haha.

That’s insane. I had no idea that happened. Now that you’re back to health and wrapped up filming for that project, do you have any trips or other projects lined up with The Shadow Conspiracy crew?
Nothing yet. I just got home from a trip down to Florida with the crew. We all kicked it and filmed an edit on Trey’s insane backyard set-up which will drop soon. I also just did New England’s Sparky’s jam with Mark Burnett, so that was dope. We talk about travel for 2017, but nothing official yet– just everyone throwing out ideas for where they’d like to go.

Do you have any trips or other projects lined up with the Subrosa crew you’re looking forward to?
Since you asked, haha, I’ll say it here first, I’m extremely thankful to be in the beginning design phase of some signature products (a seat and bars) which will drop in 2017 if everything goes as planned. We are also going to start filming soon to work on new projects for products and what not. 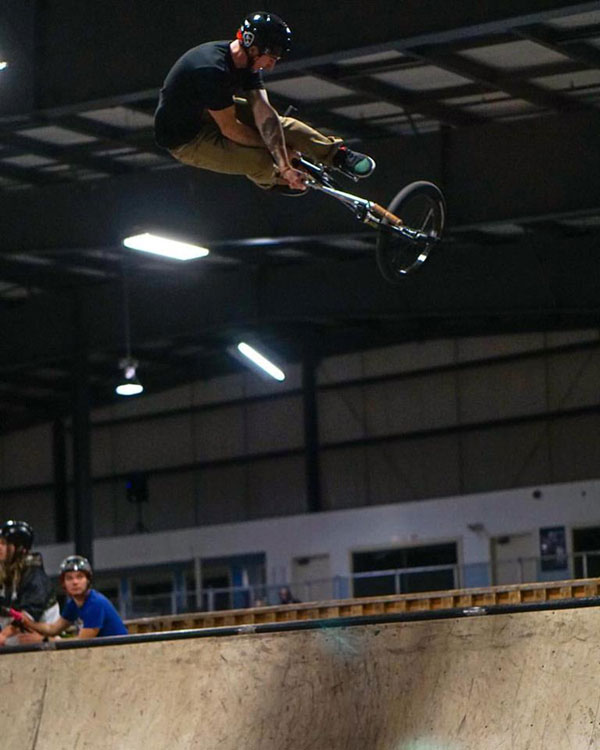 That’s rad. We saw a prototype at Interbike, but that got shut down with a cease and desist real quick. Speaking of trips, Word on the street is that you will be at Simple Session this winter. What are you most looking forward to for you trip to Estonia?
I’m so psyched to make it back out there! I just can’t wait to kick it with everyone out there, it’s always such a good time to see everyone. Riding the amazing course out there will be so sick, too, and the locals are amongst the most stoked in BMX and very hospitable to us.

How do you feel about contests? Is it something you’re into and “train” for, or do you more go for the fun of it?
I definitely enjoy riding contests.. I ride my local park Rye Airfield before I dip out to contests and just get comfortable riding big ramps again. I always tighten up on my diet and nutrition, too (one thing I took away from the whole hospital scare). I never watch what other people are doing and think like, “Oh shit. I gotta put together a good run to beat this dude.” I usually just try to do the best run that will make me psyched on my own progress. Overall I just think contests are a good time.

Other than Estonia, is there anywhere you want to get to over the winter as far as travel goes?
I definitely want to travel a bit this winter. Hopefully go kick it on the West Coast for a few weeks. I want to try to plan something over seas too– just not sure where yet.

You have been working with CLIF Bar on some events lately, right? Can you tell us about how that all came about and what the overall goal of the events are?
A marketing manager in the Northeast used to ride and asked Beau of Rye Airfield if there was a rider who could show him the ropes of today’s BMX. Beau referred him to my mentor in business, Patti Burris, to see if I’d be interested in collaborating on an event. CLIF contacted us and we met up and brainstormed some ideas and after I told him I have always wanted to give back and asked him for the opportunity to do that, he gave me creative freedom and tons of support to realize my vision of an BMX series that would make a direct positive impact on the sport by getting kids on bikes.

The clinics were so successful (350 kids on bikes), we’re working on a bigger 2.0 version for the Spring. I’ll let you know when I have more to share.

That’s rad. Looking forward to seeing what comes from that. You just wrapped up your first semester of college, right? How did that go for you? What are you planning on majoring in?
I love college. I never really planned on going to college but my liberal riding schedule made it possible to have the time, and with the business matters which come up when you become a pro rider, I wanted to understand the behind-the-scenes machine for myself. One of the things I’m most proud of this year is to have taken what I’ve learned in business from college and have been able to apply it to what I’m doing in BMX.

Currently, my major is undeclared. I’m interested in marketing, entrepreneurship, and business, so I’m taking basics until I decide which path is the best for me.

Not a bad route to go with school. Going back to the thing about your kidneys and everything, the level of riding and tricks you’re doing has to be pretty hard on your body. What are some of the things you do off your bike to help keep you rolling?
I eat healthy, drink protein shakes and go to the gym daily. I am hyper-conscious about stretching and warming up before I send myself to try some trick. 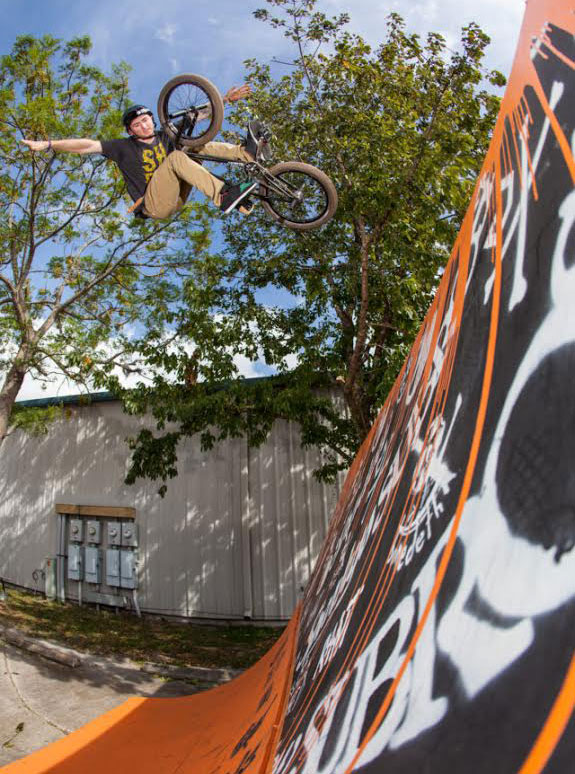 Other than school and hitting the gym, what have you been getting into off your bike?
I don’t have a lot of time outside of riding and school, lol, but I enjoy going on adventures with my girlfriend and friends. A group of us just hiked Mount Monadnock, and in the summer I spend most of my free time at the beach.

How can people keep up with you these days?
Instagram (@matt1ray) is the best platform for riding news and actual interaction. My Snapchat is mostly for my friends and family. I don’t do Twitter, and I have a Facebook but don’t interact on there a whole lot.

I’m in the final stages of dropping my website, too, and I plan to dedicate time to that daily, so that will be a great place to stay in the know about anything i have going on.

That about wraps it up! Do you have any shout outs or thanks?
The usual suspects plus a few. My sponsors: Shadow, Subrosa, and Rye Airfield. Ronnie Bonner and my TMs Ryan Chadwick, Ryan Sher, and Beau Lambert. A couple of friends in the industry who keep me looking part, haha, Mark Losey and Ethika. My family, my mentor Patti, my girlfriend, Deb. My new good friend, Nick, at CLIF Bar. And lastly, I’d like to give a shoutout to my local Hadley Park crew who have been so supportive: Maicol, Aaron, Trevor, Eddie, Pablo, Zach, Brian, Lil Ben, and Blue.