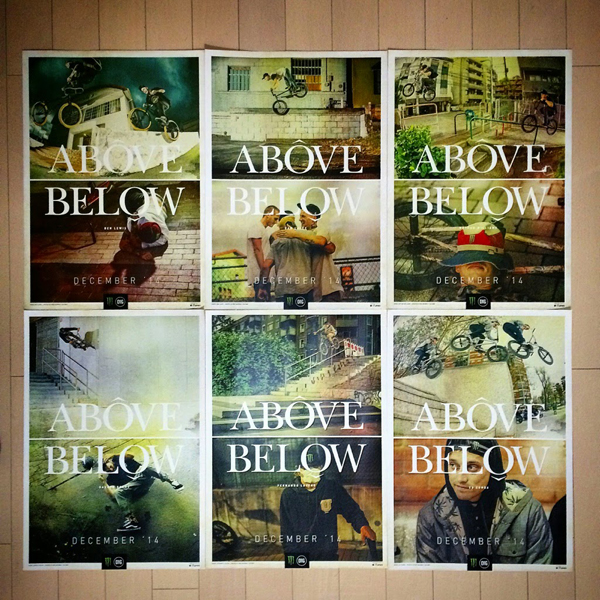 After a long wait that felt like an eternity thanks to the anticipation, the “Above Below” video was finally released on iTunes today! This video, produced by Monster and DIG is a different approach to the traditional BMX full-length video featuring the likes of Dakota Roche, Dan Lacey, Nathan Williams, Ben Lewis, Ed Zunda and Fernando Laczko. With so much hype leading up to this one, it was hard not to hit that download video and see just what these guys have been working on with film maker, Rich Forne! After checking out the video, we decided to do a quick review for those of you still on the fence about checking this one out!

Going into this video, we had a pretty solid idea of what the video was all about, but most of it was just based off three things; the line up is stacked, they had one of the best BMX filmers in the world behind the lens and assumably a pretty decent budget with Monster backing the project to properly make things happen. Three indicators that we would hope got most of your attention.

Along with that, there have been a handful of interviews and a two trailers released leading up to today that did give us some insight into just what went into this two-part video, but obviously there was still a lot of mystery as to just what to expect. We also were interested in the different approach they took to the release and what they’re doing with the money from sales. “Above Below” is unique because it has been released in a digital format on iTunes with Monster donating full proceeds to the “Road 2 Recovery” charity, which helps out action sports athletes from around the world. After a little research, we found out that the “Road 2 Recovery” charity and ARF, the Athlete Recovery Fund, that we’ve seen helping out BMX riders like Brett Banasiewicz, merged into one back in January. It’s good to know that the money is definitely going to a proper cause.

The video itself is split into two sections; Above and Below. Above features full riding sections from Ben Lewis, Dakota Roche, Fernando Laczko, Ed Zunda, Nathan Williams and Dan Lacey. These sections are all about the riding and showing you just how gnarly these guys went like you would expect from a video. Obviously with a line up like this, I think it’s pretty clear that this video is 100% focused on street riding and street riding only. We have seen quite a few amazing video parts from most of these guys over the years, but I feel like Ed Zunda and Fernando Laczko, who both have had sections in other videos, really got an opportunity to show you just what they are capable of. I will say that I feel Ed and Fernando are both pretty under rated riders, but I think their sections will really open up a lot of peoples eyes to how good they are — and have been for quite some time. Dakota, Ben, Nathan and Dan are pretty seasoned veterans when it comes to filming full video parts, and given they filmed this whole video in an almost short 10 months, they were able to produce some heavy sections that stand out in comparison to sections they have produced for videos in the past. If I remember right, Nathan has been busy filming for 3 other full-length videos along with this one, so there had to be quite a bit of pressure to make them all damn amazing. I’d personally say that Dan’s section was a favorite of mine just due to how gnarly it is… We’re talking clips you think are enders for a good portion of his part, haha. I forgot to mention that the crew filmed in Nashville, New York, Barcelona, Tokyo, Berlin, Cape Town and I’d imagine a few other places for this one so there is quite a bit of diversity as far as what they rode. 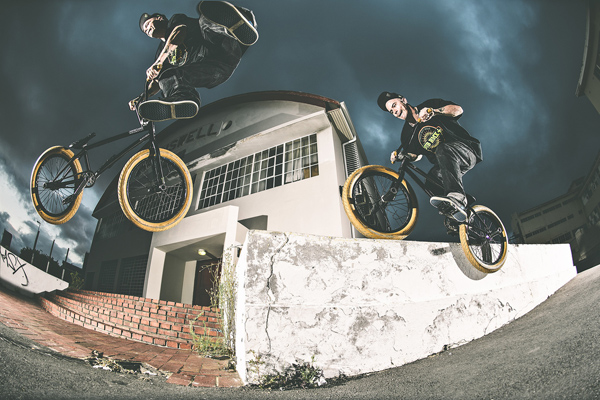 Below features interviews with some of the guys along with some insight from Ralph Sinisi, Mike Hoder and a few others to give some perspective on street riding and what goes into it from a riders perspective from spots to injuries, frustrations and stress, dealing with security and the sense of accomplishment after pulling something big. This section gives us a little more of a lifestyle look at some of the places these guys visited along with some b-roll footage of some of the crazy battles these guys had trying to pull something. This section will definitely have you saying ouch or completely looking away from the screen at times. These guys kicked their own ass for this one. The Below section is pretty rad because even if you don’t ride, it really can give some perspective into just what riding BMX and riding street specifically is all about.

As we mentioned above, Rich Forne was the man behind the lens for this project and with the help in the art direction department from the crew over at DIG, it’s a video with a pretty raw feel to it. Other than Rich, the second angles were handled mostly by the guys in the video and that kept it all pretty consistent throughout the video from a filming perspective which is always a good thing. Videos can sometimes have some weird off sections when it’s filmed by completely different people for only parts of it, but that doesn’t really happen for this one. The Above section is primarily focused for the most part on the riding with some lifestyle shots and second angles mixed throughout. Below features a lot of lifestyle shots, with interviews, b-rolls, second angles, crash clips and more that gives more of a look into what went into the clips seen in the Above section. The motion graphics are kept pretty minimal and there’s a balance between black and white and full color footage that goes really well with the feel of the video. I’m a big fan of Rich’s work and this video continues to remind me of just why he’s one of the best in the BMX industry.

The Above section runs for about 26 minutes and the Below section is an additional 37 minutes. Watching the video, I expected it to go from Above right into Below and I actually caught myself wondering where the hell the Below section was… For those of you who might run into this issue as well, make sure you hit that “iTunes Extras” emblem to get to the menu screen in iTunes that will let you watch the Below section. There’s also a “Related” tab in the menu, but it didn’t do anything for me but show a loading symbol, so I’m not really sure if there’s actually anything there or if there was some sort of error, but yeah. Just a little heads up! 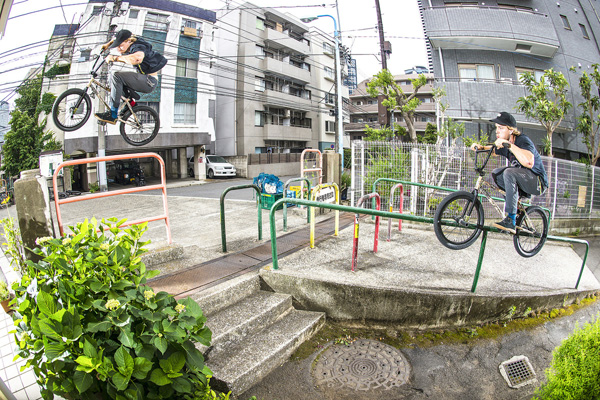 Overall, I think the video turned out real solid. The riding is wild, the film work is dialed and I liked the different approach they took with giving so much insight into the making off the video and having it as a feature versus just some small bonus section. Do I think it’s worth buying? I’d say if you’re into street riding, like wild riding and want to support a video that’s making a donation to a great cause, yeah… You will definitely want this for your collection and it does not disappoint. If you’re a ramp rider or trails rider and not into street, I’d probably pass on this one since it’s 100% street and really focused on giving perspective on that aspect of BMX.

You can purchase “Above Below” for the low price of $5.99 on iTunes now with a 30-day $2.99 “rental”, but for $3 extra bucks, I’d say go all in and just buy it. Those extra $3 goes towards the Road 2 Recovery charity which I’m sure every penny helps with. I’m not sure if this one will be available on DVD or another format later, but I could see that becoming an option at some point. Either way, the process of getting the video on iTunes is pretty simple as long as you have a credit card and an iTunes account.

You are here: Home / Reviews / Review: Above / Below