Chad DeGroot just hit us up with a video he put together from the Bikes Over Baghdad trip he took. This is 14 minutes of footage from demos they did and some of the antics they got into off their bikes! All around, it looks like it was a real good time and the troops had a hell of a good time, too!

“April 2015 crew of BMX riders went to the middle east to undisclosed locations in Southwest Asia and Africa to entertain the troops for 15 days. Here is a small sample of what went on, how the troops reacted, how the crew entertained themselves, and bringing BMX to the Middle east in the big sandbox.

Special thanks to:
Dan the man
All the Troops
Punch Train
HHEEEEEAAAAW
Digger DeGroot

END_OF_DOCUMENT_TOKEN_TO_BE_REPLACED

Here’s a rad video the Nitro Circus crew released giving you a look at what the Bikes Over Baghdad crew get into every year during their tour to visit the troops in the middle east! It’s a rad program they’re doing and it’s so clear that it does a lot of good. Take a look! This would be a super eye opening experience to be apart of, that’s for sure!

“A very special group of the world’s best BMX riders head to the Middle East to perform for the troops.

END_OF_DOCUMENT_TOKEN_TO_BE_REPLACED

Simply put… This is amazing!

“This isn’t a typical action sports film of guys doing insane tricks in remote locations (though it has that), this isn’t a story about the sacrifices our soldiers make day in and day out (though that is in there as well), and this isn’t a story of a group of friends going on an adventure (though, again, there is that). This is a story about what happens when people give for the good of others. When people put their own safety aside to make someone’s life a little better, and how selflessness can change lives.
Bikes over Baghdad ended up traveling to the middle east six seperate times with each tour roughly two weeks in length. We faced extreme conditions, mortar rounds, IED’s, injury, exhaustion and more, but we never missed a show. And while our team read like a who’s who of action sports, egos were put aside and nothing short of a series of miracles were performed.
It seems like a stretch to say riding BMX bikes for the troops could actually change their lives, but this film will show just how special of an experience this was for thousands serving in the Middle East, and hopefully it’ll serve as a reminder that we all have the power to initiate change in our own unique way.
This is Bikes over Baghdad.” – Christian Schauf

“A sneak peak of the Bikes Over Baghdad documentary coming soon. facebook.com/BikesOverBaghdad for more information.”

This should be pretty awesome to check out! 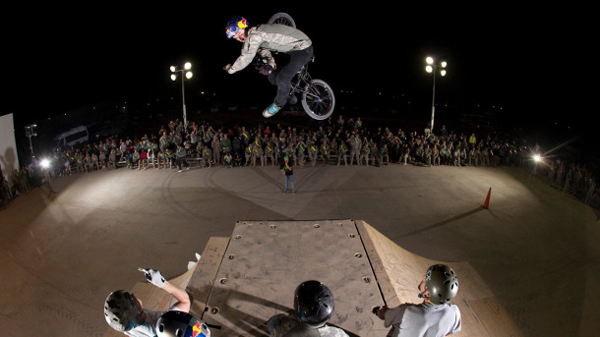 Cody York put together some photos and words about the recent Bikes Over Baghdad trip. You can read about the trip and check out some photos over on the Red Bull site. I thought this was pretty crazy…

“These shows were probably the best attended we’ve ever had,” said Schauf. “I was told by one of the people in charge of programs on the base that ‘There were more people here for Bikes Over Baghdad than when Kid Rock showed up.” Damn.