The guys over at DUB just released a brand new video featuring Fernando Laczko going to work on the streets of Spain! As always, Fernando puts his pegs to heavy use and definitely produces some dialed clips! Check it out!

END_OF_DOCUMENT_TOKEN_TO_BE_REPLACED 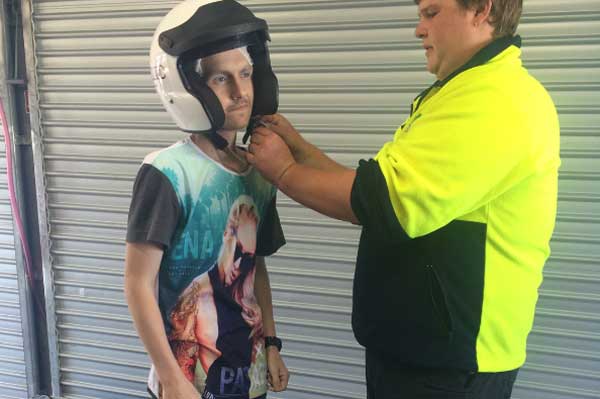 It’s always such a bummer hearing about a rider that is going through cancer or something terrible. Sam Tormey hasn’t exactly been dealt the best of cards as of late and has been fighting cancer hard. There’s a GoFundMe setup to help out Sam and his family in this tough time. They have already met their $10K goal, but anything to go above and beyond is greatly appreciated.

END_OF_DOCUMENT_TOKEN_TO_BE_REPLACED 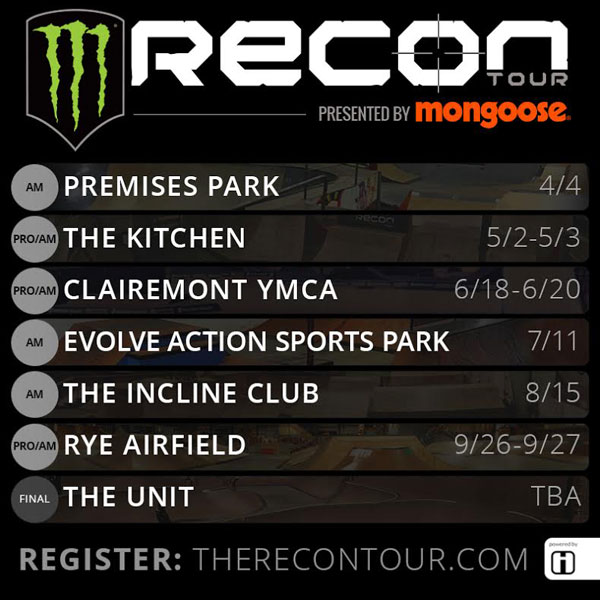 The Recon Tour just announced their dates and locations for the 2015 series! They have added more stops and even more prize money for the pros! Get the full details below on the contests!

SOLANA BEACH, CA (March 10, 2015) – Hookit and Monster Energy are pleased to announce the 2015 Monster Army Recon Tour dates and venues as well as a new partnership with Mongoose Bikes.

Hookit and Monster Energy created the Recon Tour in 2012 as a regional BMX contest series in Southern California. The mission was simple: discover, support and progress the best up-and-coming athletes in their sport. The past two years the tour has grown into a nationwide event that added structure and a vision to progress and truly identify the next unknown talent, while also supporting the professional athletes.

“We initially set out to fill a void and create a much needed amateur BMX contest series to encourage and support the up and coming riders and sport of BMX,” said Scott Tilton, CEO of Hookit. “The talent that has been discovered as a result of Recon Tour has been ridiculous and we’re honored to be a part of something that is contributing to and protecting the future of BMX.”

For 2015, the BMX contest series has expanded once again into a nationwide effort to support both amateur and PRO athletes in a much bigger way. Monster Army has stepped up once again as the Title Sponsor. Monster has also increased the PRO purse while giving the amateurs a chance to also earn paid to podium.

Monster Army is always striving to push the progression of sports and help athletes get to the next level.

”With the decline of PRO BMX events over the last number of years and no opportunity for the amateurs to make it to the next level, Monster stepped up by offering both the professional and amateur athletes a chance to compete and progress in their sport while competing for a large Prize Purse. With all of the Monster PRO team on board we look forward to further develop the Recon Tour in 2015,” Said Christopher Stumbles, Sports Marketing Manager at Monster Energy.

The Tour has expanded into 7 AM events and 4 PRO events with an overall PRO/AM final. Each amateur podium winner in Open class will be invited and travel paid to the Recon Tour PRO/AM finals, where they will compete against the best BMX athletes in the world. Each PRO event will be a series format with $15k on the line at each event and $20k at the finals. The overall PRO series winner will also take home a significant prize at the PRO/AM Final.

“We believe in cultivating up-and-coming talent, and one way we’re able to do this is through offering a wide range of accessible bikes making it easy for both experienced riders and those who are new to BMX to find something that fits their riding style. When we found out there was an opportunity to get involved with the Recon Tour, we couldn’t say no.”

END_OF_DOCUMENT_TOKEN_TO_BE_REPLACED

Check out some highlights from the Braaab Jam that went down in Eindhoven at the 040 BMX Park! There were a ton of bangers that went down and this BMX video filled with riding from Daniel Dhers, James Jones, Karl Southern,Tom van den Boogaard, Jack Clark, Cam Peake, Tom Isted and Paul Thoelen is more than enough proof of that!

END_OF_DOCUMENT_TOKEN_TO_BE_REPLACED 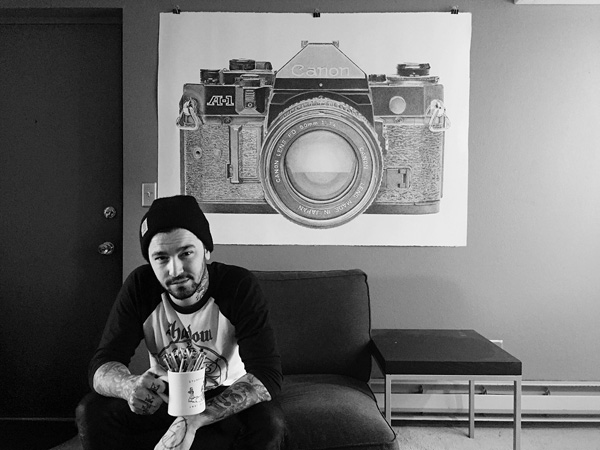 END_OF_DOCUMENT_TOKEN_TO_BE_REPLACED

Here’s one David Hasselhoff would be psyched on. Fabian Bader and a few others had a little night session in Cascais, Portugal where they clocked these clips for a quick edit. It seems like we see a video pop up from Portugal every day lately and that’s not a bad thing at all! Check it!

END_OF_DOCUMENT_TOKEN_TO_BE_REPLACED 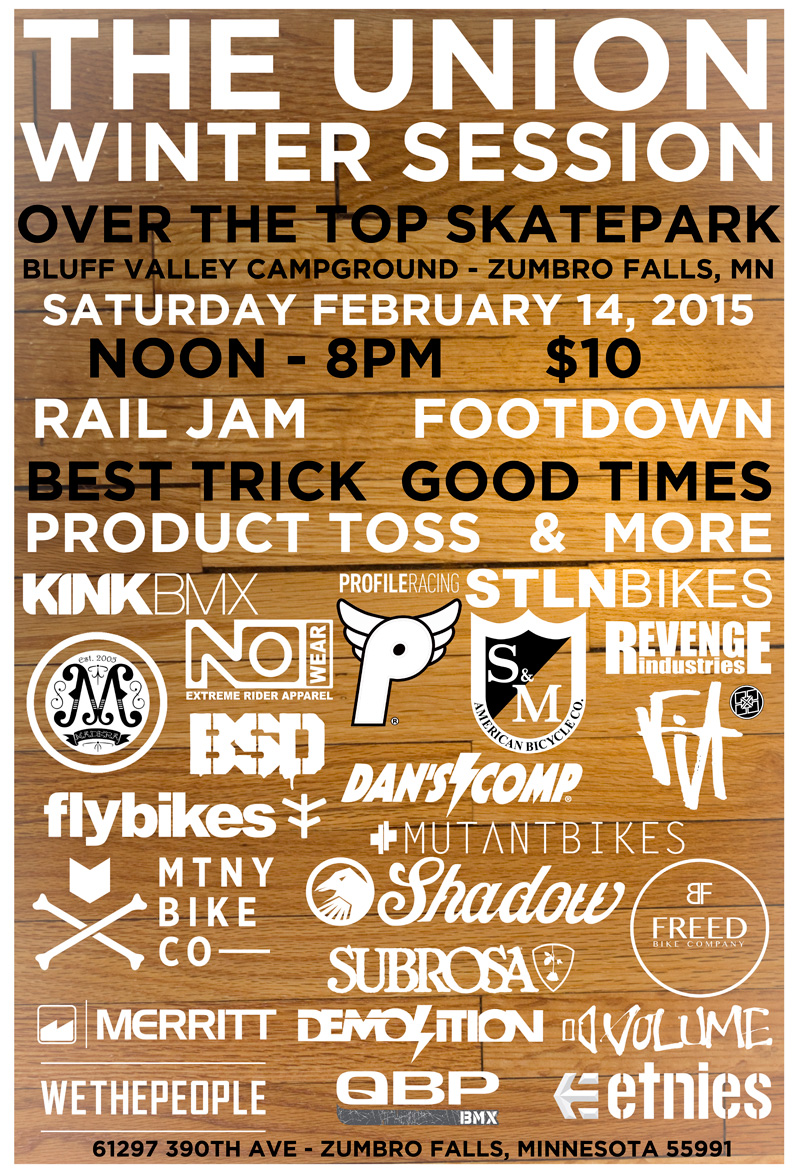 The past few years we have partnered up with Over The Top Skatepark here in Minnesota to throw our annual BV JAM that has always been a good time! After doing contests for the last few, we decided to mix things up a bit and just throw a massive session at the park as an excuse to get everyone together to ride, have a good time and get hooked up with a ton of FREE product from our sponsors!

THIS IS NOT A CONTEST

The Union Winter Jam is going down February 14th from Noon – 8PM! It’ll be $10 at the door like a normal session! The main goal of this is to get everyone together to ride and have a fun session since it’s pretty hard to get motivated when the wind chill is -35 degrees like it has been a few times this winter! We’ll be throwing different mini jams throughout the day like a rail jam, best trick on different setups, foot down, longest skid, the vert wall sticker challenge and more to win product! Also, we’ll be doing a big product toss at the end with everything we don’t give away throughout the day!

So, if you’re looking for a good time. Get to Over the Top Skatepark at Bluff Valley Campground in Zumbro Falls, Minnesota on February 14th! We promise it will be a good time!

HUGE shout out to all the sponsors for this year to help us make this happen! We want this to be the biggest session to go down this winter!