Last night the Dirt Finals for the Salt Lake City Dew Tour stop went down. It looks like Brett Banasiewicz dropped the hammer to take the win. Check out the above video with highlights from the finals, then check out the guys hucking themselves for best trick courtesy of Ride BMX. 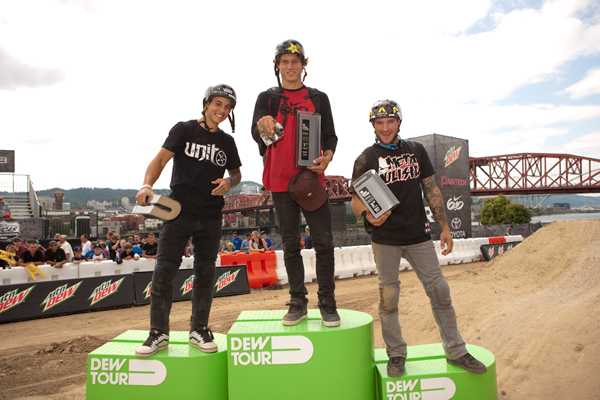 “Dennis Enarson and Kyle Baldock were neck and neck in the BMX Dirt Final at the Portland Invitational with Enarson ultimately topping the podium. Enarson’s win marks his 4th overall and his second win in Portland (2007). With a score of 91.75, Enarson beat out Baldock with a truck driver down the roll in, a bar spin to tuck, a cannonball to superman, and a tailwhip the long and low. He finished one run with a 360 suicide double tuck and another with an opposite truck. Baldock scored a 91.44 behind him and Brandon Dosch rounded out the podium with a 90.62.
“It feels cool,” said Enarson of his win. “I didn’t even have to do any new tricks really. I just rode the course as well as I could and did what I am comfortable with. I think that helped because every trick I did, I knew I could do it. I wasn’t scared going into the jump.”
This year’s Portland Invitational marked the debut of BMX Dirt for the 2011 season. The new course was designed by TJ Lavin, former BMX pro, who created jumps that required more technical riding than year’s past. The dirt contest took place outdoors in Portland for the first time in Dew Tour history, providing a backdrop of the Willamette River and city skyline.
Enarson, Baldock and Dosch headline the list of the world’s top BMX dirt riders who will compete in Salt Lake City, Utah at the Dew Tour Toyota Challenge, September 8-11, before vying for the Dew Cup at the Dew Tour Championships in Las Vegas, Nev., October 13th-16th.
You can catch all of the final runs Dew Tour.
For more information on the Dew Tour, visit www.allisports.com.”

“Anthony Napolitan, Brandon Dosch, Brett Banasiewicz, Ben Wallace, and many more compete in Duisburg, Germany at the most recent Extreme Playgrounds contest. How wild is Maddog’s frontflip tailwhip to no hander?” – Vital BMX

Filmed and edited by Timo Stabentheiner