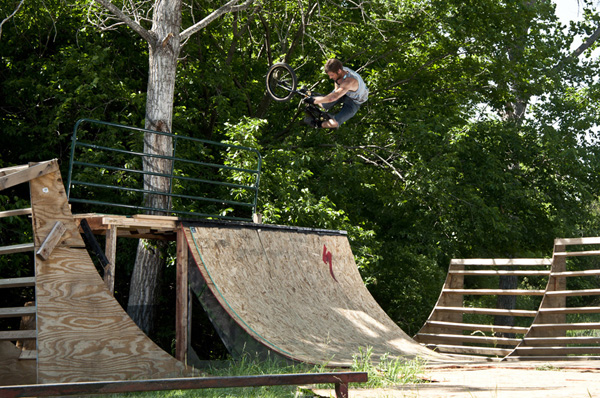 The other week a trailer for a video called “Dream Warriors” popped up. It featured a bunch of riders I had never heard of from Kansas. I was really stoked on it since it appeared to be filmed and edited real well and loaded with really good riding. I didn’t know much about it, but I definitely wanted to check it out.

Then the other day, to my surprise, the full video was released online. This 40 minute video lived up to exactly what I was hoping for when I saw the trailer. If you haven’t had a chance to check it out, make sure you check it out right here or just check it out at the end of this photogallery we’ve got for you.

Photographer Bryce Randol recently hit me up with a bunch of shots from the premiere jam for “Dream Warriors” and we figured it would be rad to do a gallery with them. Below you can check out a few words from Bryce and get the link for the gallery…

“The BMX scene in the Kansas City area has done nothing but grow over the past several years. Riders are traveling further and venturing outside of their local spots to ride, this was evident at The Dream Warriors video premiere this past weekend. Kyle Wedd, Hunter Wright, Damon Mar, and Adam Reed hosted a jam in honor of the culmination of a year and a half of hard work put in by Eric Rhodes and everyone who had a part in the video.
There could be no better place to hold such an event; Their yard is packed with home made ramps, a box jump with a satellite dish hip, rails concreted into the ground, grind boxes, and even a small concrete kicker. They held a best trick contest on each of the yards obstacles, making for some ridiculous tricks (and trick attempts). The overall vibe of the day was amazing, featuring loud music, beverages, laughs, and great video to end the night.