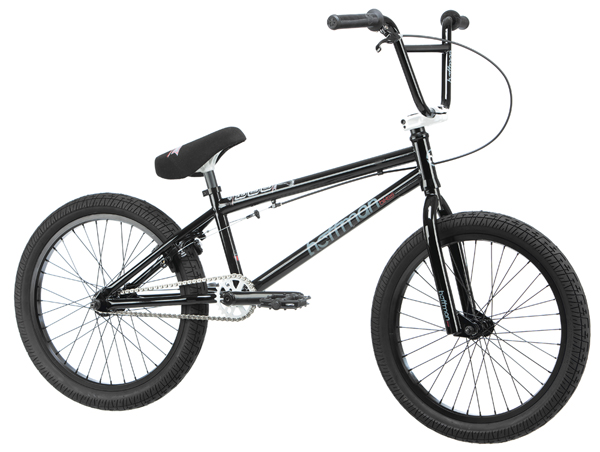 Some of you might have caught wind back in February that Hoffman Bikes had partnered with Pacific Cycle, who would be handling their distribution worldwide. Along with that partnership was access to their factories and really everything Pacific Cycle does. When that was announced, I’d imagine a few of you figured that we would be seeing Hoffman Bikes in some places we traditionally have never found their products. Today, Bicycle Retailer announced that Hoffman Bikes have become available in Dick’s Sporting Goods stores here in North America. Hoffman is joining brands like DK, Diamondback and CG (?) on the sales floor at these major sports stores all over now with Mat planning a tour to visit a select number of stores to do demos and more.

Obviously this is a move that will be leaving BMX riders pretty torn on their view towards the brand with some core riders that will be pulling the “sell out” card and others that will be psyched on the added exposure for BMX to a more mainstream market versus the traditional bike shops and online mail-orders they had previously been available in — I’d presume they will continue to have their higher end after market stuff be available in most of those previous places, despite them no longer being available on Dan’s Comp as of right now.

Personally? I can understand the brand going the route it has gone since it had been suffering for a number of years due to the BMX economy and was no longer the powerhouse brand that it was years before. Am I a little bummed? Of course. Mat Hoffman is one of the first guys that was out there doing the rider owned and operated brand, producing quality products over quantity and profit margins to save riders from waking up at the flat bottom wondering where they were because of a shitty product.

Do I think it was the best route they could have taken? Financially and exposure wise… Yeah, I mean, they will be selling a shit ton of bikes through Dick’s and I’m sure the other massive retailers around the world that Pacific Cycles will get them into which will be a great opportunity to get some revenue pumped back into the brand and I’d imagine we will be seeing a ton of kids popping up on Hoffman’s for their first sessions at the skateparks which should be a benefit for the aftermarket brands out there which is great. More kids riding actual BMX brands bikes is always a good thing!

From a core BMX perspective? I think if they would have taken a step back and revamped their product line, put more into exposing their team that’s actually pretty stacked (Morgan Wade, Seth Kimbrough, Ben Hennon, Zack Warden, Trent McDaniel, Jeremy Hrabal, Mikey Babbel and Dylan Sparkman) and made Sidewall Distribution just a distributor again instead of a distributor and an online competitor with Sidewall Action Sports for online retailers along with every shop that carried the brands they supplied, they would have been able to get some fire back in the brand that they needed. But then again, it’s 2014 and maybe that business model doesn’t really work like it should anymore.

Overall, I guess I would say I’m honestly a little bummed to see such a legendary brand popping up in these big box retailer stores because I’ve always grown up with knowing that quality came from the shops, not these stores. But at the same time I’m happy for Mat and the entire Hoffman crew for finding a way to get the brand some momentum again. I really hope these increased sales will lead to more money being put into R&D of their aftermarket frames and parts or maybe even bringing back the classic CFB series with some proper funding (I can dream). Morgan Wade deserves a signature line too!. I guess we will see where things go with the future of Hoffman Bikes.

EDIT: Hoffman Bikes sent over a press release explaining that they will actually offer TWO lines of bikes. One found through Dick’s stores and the other being offered through shops and mail-orders along with a full range of frames and parts! FULL PRESS RELEASE HERE!

That’s just my thoughts and opinion on this… What do you think? Let us know in the comments.
END_OF_DOCUMENT_TOKEN_TO_BE_REPLACED