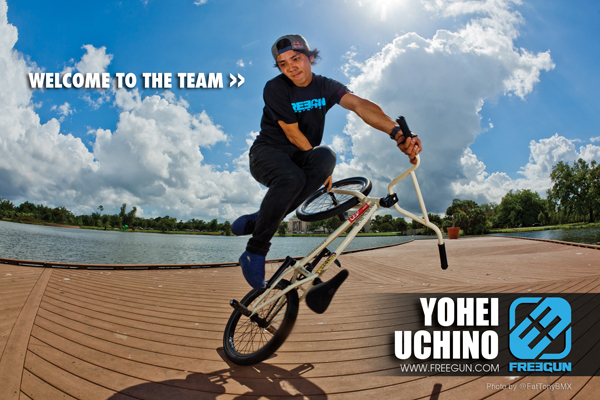 We’ve seen a fair amount of footage from Yohei “Ucchie” Uchino the past few months and it’s no surprise that he’s now doing it for Freegun over in Japan. Check out the official word below! Hopefully this means we’ll be seeing a welcome edit soon.

“After signing a deal with a major distributor in Japan, Freegun is proud to announce the addition of Japanese flatland phenomenon Yohei “Ucchie” Uchino to the Freegun family. Ucchie has been killing it on the back wheel for years now and has numerous big contest wins and podiums under his belt, along with a NORA Cup for number one flatland rider of the year. Ucchie joins a stacked team of riders in Europe, as well as Freegun’s entire U.S. BMX team including Terry Adams, Daniel Sandoval, Ben Hucke, AJ Anaya, Alex Jumelin, Sebasian Smith, Nina Buitrago, Tyler Gilliard, Kaden Stone, Victor Peraza, and Bryce Tryon.

Aj Anaya has been all over the globe lately, but he managed to make it home to Colorado and film this dialed edit for Freegun with renowned videographer Dylan Pfohl. The lines he pulls with his friends are something different that I enjoyed almost as much as I enjoy wearing Freegun underwear.

“Professional flatland BMX rider Terry Adams throws down a few quick tricks and a new combo as he explains why he is so stoked on being a part of the Freegun Underwear family.

For more information or to purchase Freegun Underwear, click on Freegun-Underwear.com.

Filmed and edited by Fat Tony”