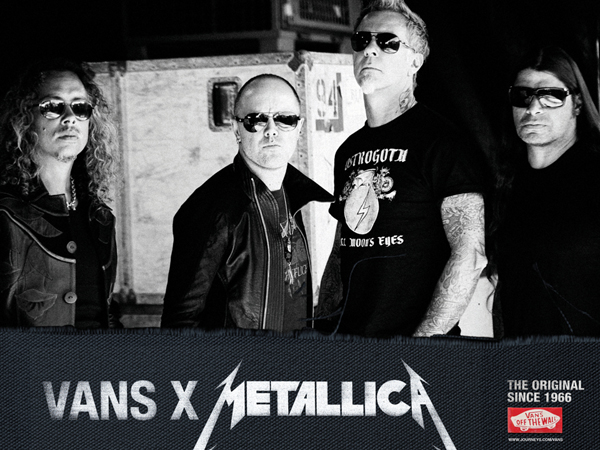 Now, I know this isn’t BMX direct, I’m sure there’s a few Metallica and Vans fans out there. Check out their new collaboration shoes after the press release!

Los Angeles (February 4, 2013) – In a continuing creative partnership, Vans and iconic rock band Metallica proudly introduce a four-piece signature collection designed by each band member delivering to stores in February. Each Metallica member – James Hetfield, Lars Ulrich, Kirk Hammett and Robert Trujillo – had free reign to choose any iconic Vans shoe style and make it their own while drawing from their favorite influences in the worlds of music, action sports and art to create Vans shoes reflecting their personal style.
Each shoe release is accompanied by a video capturing the unique shared passions between Kirk, James, Robert and Lars and favorite Vans team riders. The first edition highlights the “Trujillo Trio,” the result of Robert’s introduction to Vans’ skater Tony Trujillo and the musical mayhem that follows. Stay tuned to vans.com/metallica and metallica.com for more details on the signatures shoes and for each new video drop.

The Vans x Metallica Signature Shoes:
James Hetfield – Inspired by his favorite black boots, James added hex-bolt eyelets and a personal take on the skull and cross-bones, illustrated by Hetfield himself, to “Metallicize” this Vans Sk8-Hi Deconstruct.

Lars Ulrich – Putting a twist on one of Vans’ original Classics, Lars updated the Era Laceless with brushed twill materials and a print taken from the diamond plate pattern on his snare drum. He finished his shoe with a Dirty Donny character on the inside heel.

Kirk Hammett – Tying back to a love of surfing and nature, Kirk chose an all-natural upper made of hemp for his collapsible Slip-On. The inside heel is accented with a guitar pick inspired by his Ouija guitar and designed by one of Metallica’s favorite artists, Dirty Donny.

Robert Trujillo – Robert grew up wearing Vans as a young skater in Venice Beach, California. For his shoe, he took Aztec calendar artwork, designed by his wife Chloe, which is carved in one of his bass guitars and placed it in blue, on the side of this Escuela.

In March, Vans and Metallica introduce Kill ’Em All theme shoes featuring two of Vans’ all-time favorite styles, the Classic Slip-On and the Sk8-Hi, each emblazoned with artwork marking the 30 years since the release of Metallica’s debut album.”

Check out all of the shoes after the jump…