Take a closer look at Chase Hawk’s signature colorway of the Vans Owens Hi 2. There’s also a bunch of real good riding clips that made me say “holy shit” more than once…

Filmed and edited by Justin Kosman

Vans dropped this edit featuring some of the clips that weren’t seen from the five French team rider’s edits they dropped the last few weeks. You can go through Vans’ Vimeo and check out the five edits if you had missed them. They are all worth a look again anyways.

Here’s a glimpse at what went down at the House of Vans in Brooklyn this weekend which featured some of the Cult team. I’m hoping for some more footage from this since it’s pretty random clips and has a few clips that cut out. I’m going to say this wasn’t put together by somebody who rides BMX.

The Shadow Conspiracy and Vans are back at it again with another edit to celebrate finishing their collaboration. This time they gave Lahsaan, Ty, Trey and Alistair 72 hours with Tony Ennis and Justin Kosman to film this banger of an edit. 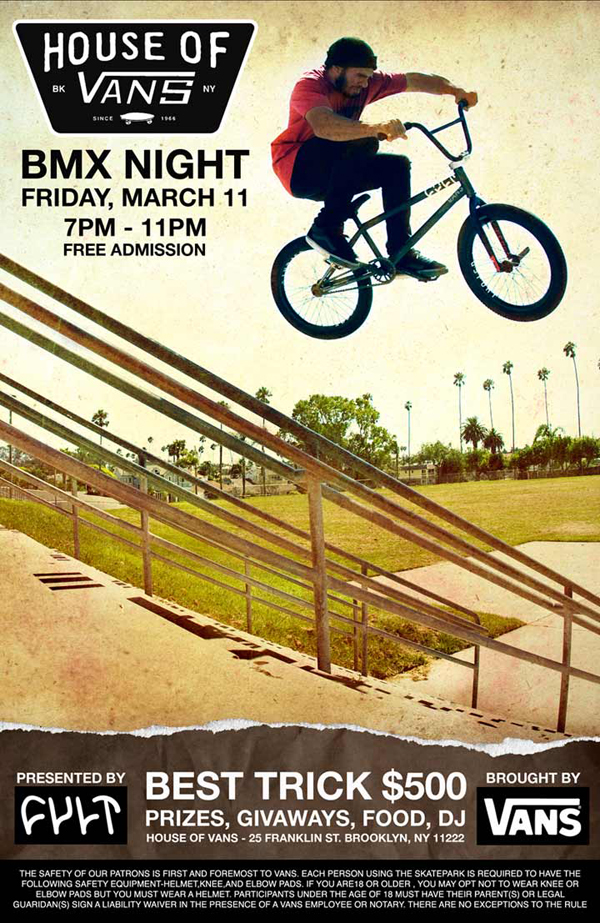 It sounds like Cult‘s Chase DeHart, Dakota Roche and Bobby Simmons will be at the House of Vans in Brooklyn tomorrow night riding. If you are in the area check the flyer to see how you can get in on the session.

Well, 2010 is over and 2011 is already underway. Starting the year off right with a fresh new interview for you. A week or so ago I was talking to Mark Noble about what has been going on with Deluxe these days and he mentioned that he was working on a new frame with Max. I’ll admit that I don’t know a lot about the scene in France, so I figured that it was a perfect excuse to ask Max some questions and find out more about him. It turns out Max had quite a bit to say and I did my best to clean up his english a little bit. Check out what he had to say, along with some real good photos and a few edits. We’re off to a good start for 2011…

Dylan Smith is another one of those real talented shredders from Austin, Texas who has caught my attention over the last few years. I figured he has been pretty busy filming for a possible Fly video and the Empire video, and it would be a good time to see what he has been getting into. That and if you’re into guitars and music this one should be interesting. So check out what Dylan has to say, some photos from 9th Street and some past edits!