Sammy Combs is back after an injury took him out!

It’s been a while since we’ve seen Sammy Combs‘ name pop up, but that’s because he was working hard to recover from a bad injury that took him out for over a year! Fortunately he’s healthy and has been busy putting in work out in the streets! Here’s his first edit back for Volume Bikes and it’s a banger! Check it!

“Sammy Combs Welcome video is finally here. (AKA @papabison).
Sammy joined the Volume team back in 2020 and got injured on his first trip out with everyone, postponing his welcome edit.
Once the doctors gave him the ok he got to work and came back better than before, progressing every day.
Him and Dalton came out to socal to film as often as they could.
Resulting in this piece right here.
Full of heavy rails, setups and spot some spot usage.
We’re excited for everyone to see this.
Enjoy!

The crew over at Volume Bikes have released their new Velocity frame, and they have given Markell Jones his very own signature colorway on the frame. Here’s a fresh promo video where Markell puts the frame to work out on the street, along with a look at his LB Sand color! This has plenty of dialed clips and the frame looks real good, so check it out!

“Markell Jones staying on theme for this one, filmed the majority of this in and around Long Beach.
So it’s only fitting that we name his colorway on the Velocity frame; Long Beach Sand(LB Sand).
Here is Markell bringing his own ideas & clean style to every spot he touches. Enjoy!

Get a look at Markell Jones’ new Volume Velocity build! 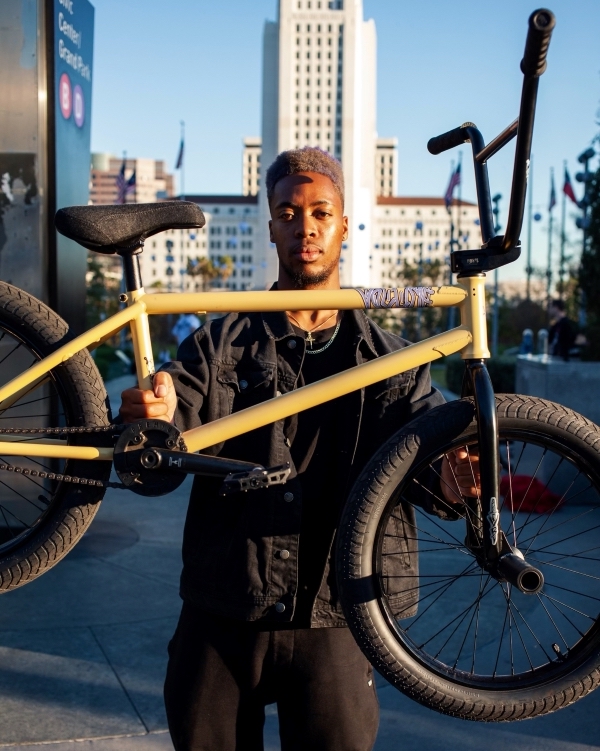 The crew over at Volume Bikes have released a new Bike Check with Markell Jones and his brand new Velocity build, in his signature LB Sand colorway. You can check out more photos, a few Q&A questions and more over on the Volume Website!

JP Ross and Daniel Specht teamed up for a new video!

Volume Bikes have released a fresh split edit featuring JP Ross and Daniel Specht going to work on street spos and ditches out in California! As expected, both of these guys delivered with a ton of dialed riding with plenty of grinds, whips and more to take in. Hit play to check it out!

“Jp Ross & Daniel Specht, two of our Socal IE riders, hungry to stack & ready to put down something wherever they go.

Watch them both take their own approach, go back to back on spots and throw down.

Volume Bikes have released the new Billy Perry signature Volume X Follow The Leader frame. To celebrate, Billy put in work for this banger of a BMX video packed with dialed riding from start to finish to show you just what this frame can handle while bouncing around down south. Take a look!

“Billy Perry is back with more stylish riding on the all new Volume X Follow The Leader frame. Billy kept it steezy from riding in Las Vegas to Mexico City. All while riding his Volume X FTL signature frame. Check out http://volumebikes.com for more info.

Beau Trigg is now doing it for Volume Bikes over in the U.K through Ison Distribution. Hit play for a couple real solid clips from the streets to bring the news! We would imagine we’ll be seeing more from Beau in 2022 so get familiar.

“@btrigg_bmx. Welcome to the UK Family!
We are so stoked to have young @btrigg_bmx join our UK Team, The energy this guy brings to the session is unreal!

Volume Bikes starting the weekend off with a new one featuring Victor Munoz putting in work on the streets of California! This one has a real good mix of tricks and spots, keeping things interesting from start to finish. Take a look!

“Victor and I only had around a week to film this video while I was in California and he absolutely killed it with the timeframe we had. Victor isn’t particularly known for his street riding, so seeing him apply his skills to street spots was sick to film. I’m hyped on what we created together. Victor is one dialed dude and this video definitely shows it.” – Dalton Voss

Filmed and edited by: Dalton Voss

Juani Zurita has been crushing it on both sides of the lens for quite some time now, but he hasn’t had his own proper video part. Well, that changes now because Volume Bikes released this new one featuring Juani putting in work out in the streets. Dialed riding and great film work. You can’t pass this one up!

“Juani Zurita has been hard at work on this one for a good while now. This video being Juani’s first real video part, you know it’s a good one!