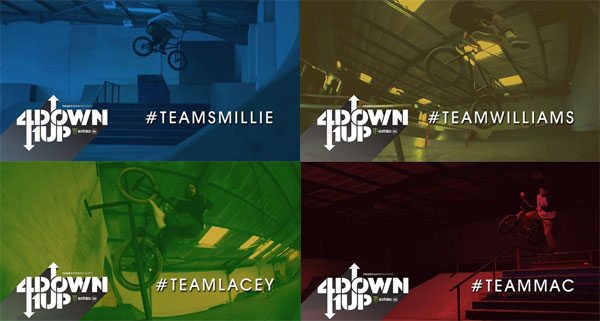 Over the past 4 days, DIG have been releasing the 4Down1Up BMX videos featuring Team Lacey (Ben Leiws and Bruno Hoffmann – Filmer: Will Stroud), Team Mac (Shawn McIntosh and Phil Martin – Filmer Miles Rogoish), Team Smillie (Devon Smillie and Matt Roe – Filmer Peter Adam) and Team Williams (Nathan Williams and Alex Valentino – Filmer: James Cox). We figured there’s a chance some of you might have missed one or two of the videos, so we have put all 4 together in one place for your viewing pleasure. Don’t forget that tomorrow you can vote over on the DIG website for your favorite video and get entered to win a huge prize package! Let’s make the jump and watch these videos.

You can VOTE HERE NOW for your favorite section.

“You’ve seen the On The Couch videos and now it’s time for you to check out what Team Lacey got up to with their time in the 4Down park. Due to a horrible ankle dislocation the week before Lacey was unable to ride so called on good friends Ben Lewis and Bruno Hoffmann to fill in, and they did just that! Combine those two with the filming expertise of Will Stroud and you’re in for a class act. Look out for the other teams edit’s dropping right here on DIGBMX.com over the next three days, and you’ll have your chance to vote for your favourite video along with being entered into our giveaway!”

“#TeamLacey’s 4Down 1Up video hit the web yesterday and now it’s time for another! #TeamMac consists of FIT teammate Shawn McIntosh and Hastings’ own Phil Martin – a perfect mix of styles. Miles Rogoish was called on to take care of the video side of things both behind the camera and computer; here’s the final result! Look out for the other teams edit’s dropping right here on DIGBMX.com over the next three days, and you’ll have your chance to vote for your favourite video along with being entered into our giveaway! Filmed and edited by Miles Rogoish”

“Two down, two more to go! Our third 4Down1Up video comes from Team Smillie, consisting of the man himself, Devon Smillie, style cat Matt Roe and probably the smiliest man on the planet, filmer Peter Adam.​ Again, different from the first two videos but i’m sure you’ll agree they did an amazing job. And who the hell were those two old fellas who killed the place?! Look out for the final 4Down1Up video dropping tomorrow right here on DIGBMX.com – you’ll have your chance to vote for your favourite video along with being entered into our Dans Comp giveaway!”

“The final 4Down1Up video is here and it’s none other than TeamWilliams! It’s no surprise this one is equally as crazy as the other edits when the team is made up of a combination of Nathan Williams, United teammate Alex Valentino and filmer James Cox – and add that to a really interesting colour coordination idea with regular and switch and you’re in for a great video. Remind yourself of what TeamLacey, TeamMac, and TeamSmillie got up to earlier on in the week and then vote for your favourite video tomorrow along with being entered into our giveaway, courtesy of Dan’s Comp!”

You can VOTE HERE NOW for your favorite section.

You are here: Home / BMX Videos, Products, News and More / 4Down 1Up – All Sections