Last night, we posted up a photo on our Facebook page asking if you guys preferred two piece or four piece bars. After we posted it up, it got us thinking about BMX Bars in general and the geometry. We figured maybe it would be a good time to talk about some of the details, terms and just what kind of differences you can find in handlebars. Although you might see a few degrees of difference, it can actually make quite a bit of difference. Let’s talk about this.

If you’re more of a video learner, Brant Moore put together a video based off this article for you to learn about BMX Handlebar Geometry…

Above are the Odyssey Lumberjack XL and The Shadow Conspiracy‘s new Johnny Devlin signature Crow bars. Looking about both bars, it’s obvious they’re different and they both have different geometries.

Odyssey’s Lumberjack XL bars are made from multi-butted 41-Thermal heat-treated chromoly with a 9″ rise, 29″ width, 1-degree of upsweep and 12-degrees of backsweep with a weight of 33 oz.

So, looking at both bars, they have some similarities and some differences. Let’s really look at this in detail.

Two Versus Four Piece Bars
Let’s start out with the obvious… One is two-piece (two separate tubes) and one is four-piece (four separate tubes). For those of you who aren’t understanding, the Odyssey bars (top) only use two tubes. One long tube that bends to the shape with one cross bar to help keep the bars stiff and rigid. The Shadow Conspiracy bars (bottom) are four-piece. They both sides have a separate tube, with two cross bars holding them together.

What does this mean? Well, for the most part it’s more of a look thing over anything else. You could argue that two-piece bars are stronger than four-piece bars because there are fewer welds. Fewer welds mean fewer spots where cracks and breaking technically could happen. Not to say we have never seen bars sheer off in the middle of a tube, because that can happen – usually because the tubing was too thin or low quality chromoly – but 9 times out of 10 we’ll see bars break on the bend just beyond the grips at the weld with the top crossbar because this is where a good portion of the pressures from riding land before distributing throughout the rest of the bars. We have even seen handlebars snap where the stem clamps down on the tubing, which could be because of poor quality or the stem being over tightened causing excessive stress. Beyond that, there aren’t really any huge advantages or disadvantages to running two over four piece bars. Well, you might get some additional street cred if you run four-piece bars, haha.

4130 Chromoly VS. Hi-Ten Steel
It’s pretty common to see low end complete BMX bikes come with Hi-Ten steel versus 4130 chromoly (both are steel, just difference in quality, strength, weight). But, for the most part, BMX handlebars and most of your bike are made from 4130 (sometimes 4140) chromoly tubing. 4130 is much stronger than Hi-Ten, which allows you to use thinner tubing to save some weight and still be stronger. You can learn more about 4130 Chromoly here – What Is 4130 Chromoly

Heat-Treating
Both of the bars we used for an example above happen to be heat-treated. Heat-treatment is a process done to chromoly to alter its properties that can change hardness, strength, toughness, ductility and elasticity in the material. Ultimately, the process can make it stronger (sometimes weaker if done improperly) and hold up better to the levels of stress and abuse that BMX puts on the material. Odyssey have their patented 41-Thermal process that comes with a lifetime guarantee against bending and breaking which is a pretty clear indicator that they put a lot of trust in what their heat-treatment process does to increase the overall strength. Want to learn more about heat-treatment? What Is Heat-Treating 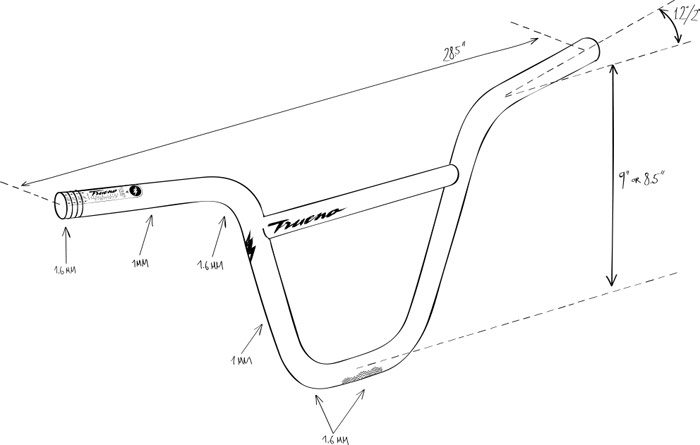 Butting
Butting is another one of those terms we see in BMX handlebars a lot. Butting is a process that makes the tubing used thicker in some places that take on more stress, such as bends, and thinner in areas that are less likely to bend or break like the middle of a tube. Fly Bikes have some great graphics on their website showing where they have placed butting on their handlebars (and frames). As you can see from the graphic above, there’s multiple spots where they have made the tubing 1.6mm thick versus 1mm thick. This allows for that extra strength on the high stress points (bends and ends of tubing) and where it can be thinner to save a little weight.

Rise and Width
Rise and Width is one of those things that we have seen A LOT of change in over the years. The width and height have both increased a couple of inches each. We actually put together something about that not too long ago – Raise the Bar: A Look at BMX Bars – that looked at how much bars have grown in the past decade. But, that’s another topic.

The Rise of the bars are the height from the bottom of the bars at the center where the knurling is, to the highest point of the bars. With upsweep, it’s the very ends of the bars. We’ve explained that in the graphic about with the red lines. When it comes to rise, this is more of less a personal preference over anything else. We typically see taller riders using higher rise bars to help keep them from hunching over, making for a more comfortable ride. But, we also see a lot of smaller riders riding big bars because they are also comfortable and some feel it can help increase leverage when it comes to bunnyhopping. However, we still feel anything beyond 10″ is excessive, haha.

The Width is the measurement straight across from one end of the bars to the other, outlined in the blue. Most bars these days offer between 28″ and 30″ of width. Many of which end up cutting a quarter of an inch to a half inch off just because they prefer to run their hands closer to the inside of the grips and bends. Traditionally, you would want your bars to be about the width of your shoulders, so in reality, 28″ is about right for most people, but there are bigger riders out there that can utilize the 30″. Similar to height, width is also a personal preference as to what feels right. Just remember before you go hacking your bars down, it’s easier to make your bars narrower than it is to make them wider… So, make sure you’re 100% sure before you trim.

Backsweep is how much the bars bend back from center. So, when you look at your crossbar, that has zero degrees of backsweep and that line across would be center. If your bars had zero degrees of backsweep, they would line up all the way across from end to end. The backsweep helps with control and also makes it so you sit a little bit behind the bars when you’re pulling up versus standing directly over the bars. If you had negative sweep, or front sweep (which as far as we know doesn’t exist), your bars would pull you forward more and your wrists would turn your hands inward, making it harder to pull up and ultimately control your bike. The amount of backsweep is also a personal preference. I can’t recall ever having an issue with pain or anything due to backsweep, but I’d be willing to bet somebody out there has.

Tear Shaped Crossbar
So, if you recall way back at the beginning when we were talking specs and details of the two sets of bars, you might recall that the Crowbars (4-piece) have a tear shaped crossbar. What does that mean? Well, it’s more of an aesthetic thing than anything else. The tubing isn’t round, it’s round on top and pinches inward toward the other side, similar to what a drop of water would look like. There really isn’t any huge benefit to it as far as strength or anything else goes, but it looks cool. Over the years we’ve seen a number of brands offer different crossbars. A few examples would be the Nowear Candybars that feature a v shaped crossbar, similar to the old Sergio Layos signature Pantera bars back in the day, Macneil‘s old Silencer bars featured drilled holes in the ends of the bars, which were not quite sure how well that worked out, but it looked cool and saved a little weight, and Stolen have their Deviant bars with the Vortex crossbar. 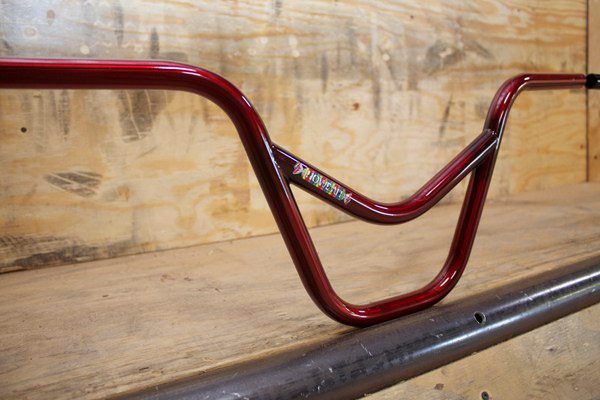 So, that about wraps things up. When it comes down to it, BMX handlebars are more or less personal preference to what you feel comfortable with. Big, small, wide, narrow, no upsweep, a lot of upsweep, more backsweep or less… It’s all about finding that right combination that feels good and you think looks good. So, what do you prefer? Do you have any questions? Let us know what you’re thinking in the comments below!