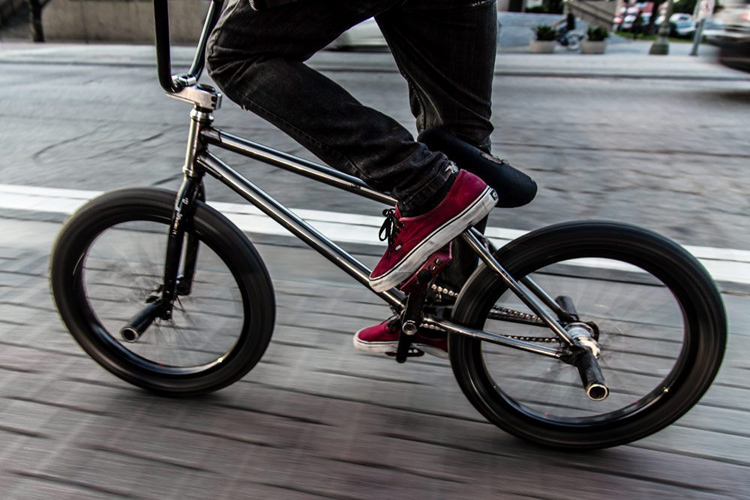 Curious what BMX is? What BMX means? What are the different kinds of BMX? What kinds of BMX bikes there are? Well, you’re in the right place! Here’s a breakdown of just what BMX is and what it’s all about. Although it’s a simple acronym, it’s a little more complex to explain exactly what BMX is… So let’s get into this.

The word BMX is an acronym for Bicycle Moto Cross. The term was originated in the 1970’s when kids started racing their bikes on dirt tracks in southern California. The origination was focused on the racing side of things with an emphasis on the jumping, speed and style. It wasn’t long until tricks started making their way into this new sport and a whole new genre of BMX was formed. BMX racing and Freestyle BMX. There’s a good bit of information on Wikipedia if you want a little more background on the start.

WHAT DOES BMX Mean?

As we mentioned above, BMX stands for Bicycle Moto Cross. The term originally coined by those kids racing their bikes on dirt tracks imitating dirt bikes or motocross racers. However, the meaning has expanded quite a bit over the years and could mean a number of things. When a BMX rider tells somebody that they “ride BMX”, it could mean anything from BMX racing to BMX freestyle where they might ride street, parks, dirt jumps or flatland. They might even get into a little bit of everything. Typically we find racing and freestyle separated since they are quite literally different worlds. For instance, BMX Union focuses on the freestyle aspect because the racing side is a whole thing on its own with many different brands (some brands do make both racing and freestyle products such as Profile Racing and S&M Bikes for an example), sponsored riders, events and more that only cater to racing, much like freestyle has events that only cater to freestyle. We grew up on freestyle and have only raced a few times for fun, so we leave it to the racing experts to cover that side of the sport.

WHAT ARE THE DIFFERENT KINDS OF BICYCLE MOTO CROSS?

As we mentioned above, there are two categories of BMX and then multiple sub categories under them. Typically there’s BMX Racing and Freestyle BMX, but those can also be broken down further.

BMX Freestyle can be broken down into 4 different categories; Street, Park, Dirt and Flatland.

– BMX Street riding is the most popular aspect at this time with BMX riders finding unique setups out in the streets to ride from handrails and ledges to stair sets, banks, walls, curbs, curb islands, ditches, rooftops and more. Pretty much anything can be used as a “spot” to ride as long as you are creative and have the ability to ride the different types of terrain. The types of tricks done are typically grinds, balance tricks like manuals and nose manuals, barspins, tailwhips and spins. There are an almost infinite amount of trick combinations that can be done as well. Above is a video showing you just a sample of what’s possible on street riding from Garrett Reynolds.

– BMX Park riding is the type of riding on transitions like quarterpipes, box jumps and spines. This is a type of riding that is probably the most recognizable by general public because it’s taking place at skateparks that have popped up all over the world and can be found in most cities and some towns. This is also the more commonly seen type of BMX event seen on TV. Over the years there have also been many types of skateparks called Plazas that have popped up that cater more toward street riding, but we’re going to focus more on the ramp style for explaining this. The types of tricks commonly found during ramp riding are flips, tailwhips, spins, barpsins. This is where you see a lot of combinations of those tricks and there can be grinds and stalls, lip tricks (technical balance tricks done on the deck of the ramps) and more. The combinations are once again pretty endless. Above is a video of Logan Martin‘s private park setup and plenty of examples of riding.

– BMX Dirt riding is what was really that first branch off from racing as riders would often use the jumps from the race tracks to do tricks. This has evolved greatly over the years to the point where the dirt jumps are often complete works of art that have many lines and types of jumps from doubles (a jump and a landing) to tabletops (jump and landing with the gap filled in), hips, berms, rollers and more. Dirt jumps are often limited by ones imagination and the amount of effort they want to put into it. Often times dirt jumps are illegally built on vacant properties, so the lifespans can be short. But, there are also a number of legal trails spots around the world and even bike parks that have popped up as well. BMX dirt can be a jump built off a few small piles of dirt, or years and years of sculpted works of art that are mesmerizing to watch riders jump through and perform tricks such spins, tailwhips, turndowns, body variations like no footers, no handers and more. Style is a key focus for dirt riding as well. Here’s a sample from the Gorge Road Trails in New Zealand.

– Flatland BMX riding is one that was inspired by early ramp riding and riders that didn’t have much to ride in their area. These tricks are performed on flat ground and require a ton of balance and bike control to do. This style of riding is one of the more difficult to master and the tricks and combinations are endless. In recent years we’ve seen a lot of flatland inspired riding make its way into the street riding category, which has made things even more interesting. The types of tricks are spins, manuals, nose manuals, barspins, tailwhips, bike varials and more. Above is a video from Matthias Dandois with just a sample of what’s being done in flatland these days.

– BMX Racing is similar to freestyle in the fact that there’s multiple forms of it from the different classes, which mostly depend on the age of the rider. There is racing from kids on balance bikes all the way up to the cruiser class that use 24″ wheels. However, BMX racing is primarily focused on the 20″ size. The riders will start at the gate and race through a track filled with jumps, berms, rollers and more. The goal of racing is to be fastest, so tricks don’t make their way into this side of the sport all too often. Racing is also the most competitive side. Although Freestyle does have contests and rankings for riders, Racing is obviously more focused on these rankings and the pressure to be the best. 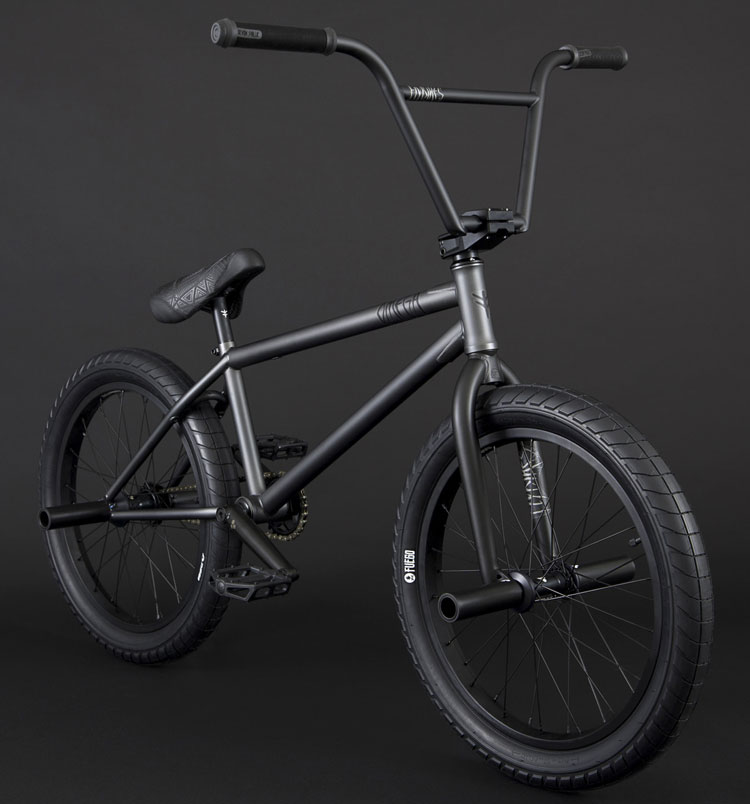 What kinds of bikes are there?

When the sport first started, it was focused on 20″ wheels and 20″ frames. Over the years with all the different aspects of riding has evolved quite a bit. Obviously with the different types of riding, there are different modifications for bikes necessary from materials to geometry, sizes and more. Although racing bikes are traditionally focused on having 20″ wheels and a 20″ frame size, the sizes can vary quite a bit. For example, over the years BMX has expanded to include 12″, 14″, 16″, 18″, 22″ and 24″ bikes for young kinds all the way up to the older adults that want to cruise as well. Frame size, geometry and materials vary greatly as well. With freestyle BMX, you traditionally find stronger 4130 chromoly frames and geometry that is specific to the type of riding and tricks you like to do. With racing, you find lightweight aluminum and carbon fiber frames with different geometry focused on helping you go faster and jump better. There are many other differences like the style of brakes being used (or the lack there of brakes completely for many freestyle riders) and parts like tires or gearing and wheels, but that’s a whole different in-depth topic on its own.

Here’s a cool guide breaking down all the different parts of a freestyle BMX bike. Racing bikes are similar, but do have a handful of different features.

Here’s a great guide for figuring out the BMX bike size or top tube length based on your height — What Size BMX Bike Or Frame Is Right For Me? – Note: This guide only goes from 12″ to 20″ bikes. 22″ and 24″ bikes follow similar height guides, but 22″ can be closely related to the 20″ sizing. 24″ is more of a cruiser class for racing and just rolling out in the streets so you’ll want to be comfortable on a 20″ bike before getting up into that size. Also note, top tube lengths are based off height, but some riders prefer a longer or shorter top tube length, so it’s really more about finding what’s comfortable for you and your riding type.

What are BMX bikes good for?

BMX Bikes are good for fun! They’re designed to go fast, jump, spin and push your balance and strength abilities. It can be a serious workout and it’s also a serious mental sport as well! It challenges your ability to push your limits, to handle pain tolerance, ability to calculate risk, geometry, physics and more. There’s a lot of things that BMX does that go well beyond just pedaling on a bicycle.

Hopefully his helped explain what BMX is, what BMX bikes are good for, the different types of BMX and more. If you have any questions, let us know what you are thinking in the questions below!