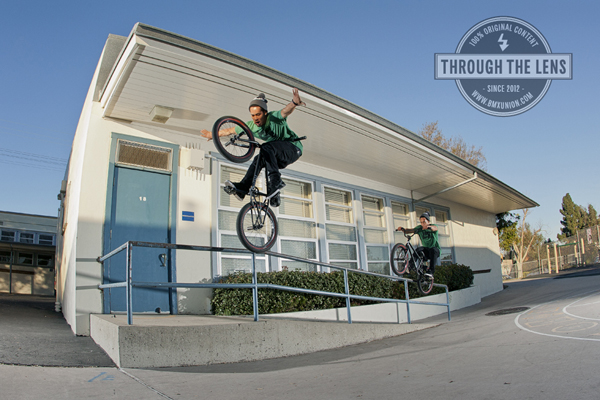 This whole photo came about while I was down in San Diego shooting with Chad Kerley and Dennis Enarson for a split interview to be printed in Soul magazine. We were spending the weekend out cruising, and shooting seeing what we could come up with. At this point, I really strive to be on the rider’s side of things when it comes to shooting. What I mean by that is that I just want to shoot what they want to shoot. I don’t like forcing things, and I don’t like to feel like I’m putting pressure on the riders. There is a certain balance when it comes to shooting photos and working with some of the top pro riders in the world. If there is someone out there that is a pain in the ass, or messes up shots on a regular basis, or puts too much pressure on shooting then riders will recognize that and word spreads quickly. The BMX industry is a small industry. People talk so it’s best to keep it mellow and let things happen as they happen. Honestly, taking the pressure out of the situation makes it so much more enjoyable not only on my end, but also on the riders end as well. 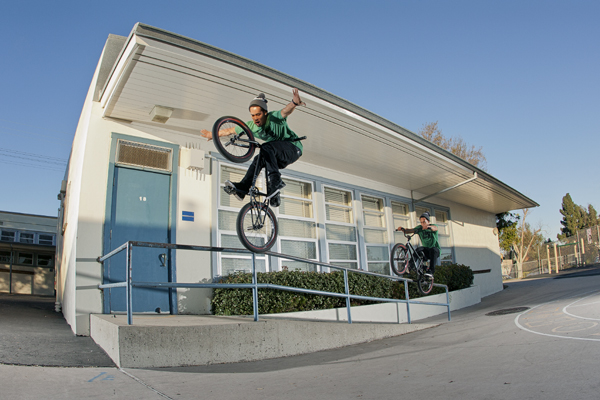 When we were out cruising for the day we ended up spending a bunch of time at this school. I can’t remember exactly how it got called out for Chad or if he chose it on his own but he ended up wanting to do the ice to tuck. I actually spent a bunch of time trying to figure out exactly how I wanted to shoot it. The light was actually kind of hard to deal with at the time. The sun was starting to go down and half the photo was in the shade so I had to balance the light with my strobes. With the Einstein’s incredibly fast recycle time I can shoot composite images like this and actually shoot the trick as it happened as opposed to taking two separate frames and picking the best ones. It’s just more realistic that way and if it is possible at all, that’s how I’m going to do it 100% of the time. It’s one of those photos that just grabs my attention and holds it. I love the distance between the actual grind and the tuck simply because it really shows how much of the rail actual got used. The idea of a composite that appeals to me most is the fact that it tells an entire story in a single photo. Whether there are two frames, five frames, or ten frames as long as it has a beginning and an end, that’s what matters. It only took Chad about ten tries before we were done and after checking the one you see here, we were both happy and called it on that. 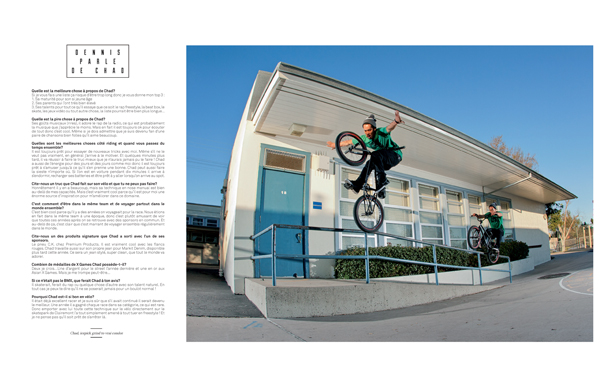 When it came time to put the composite together everything worked out exactly how I had pictured in my head and it quickly became one of my favorite images from the article, and in fact one of my favorite images of last year. There is just something about Chad’s riding that is so rad to watch in person. He’s incredibly dialed and everything he does almost seems effortless. I submitted all of the photos for the article to the guys over at Soul knowing that I would be happy with the layout and when it came time to get a look at the finished product I was stoked. They always do an amazing job with layouts and overall design. There is also something to be said about the feeling that I still get from seeing my images in print. To have the magazine, and to hold the physical product is just so much more satisfying than seeing an image on an iPhone or laptop screen. Call me old school, but a piece of me belongs to print. If every printed publication stopped tomorrow I would consider myself incredibly lucky to have had the opportunity for any of my work to be featured in a magazine. If you want to read about how I ended up shooting the cover of that same issue check it out HERE in TTL #62. 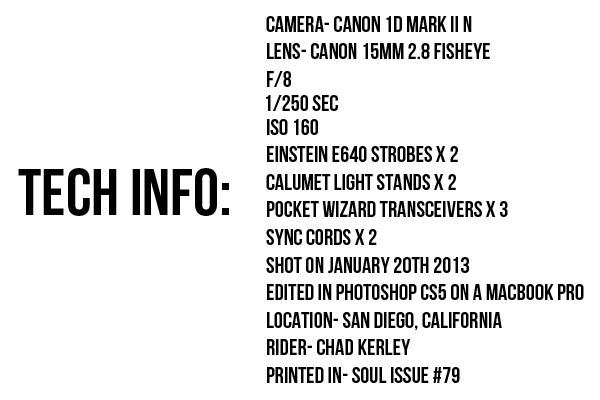 As for any of the technical specs on this photo the set up was actually fairly simple. I had picked to shoot it fisheye and then spent some time lining up the composition. Looking through the frame I wanted to keep the entire building from edge to edge in the photo. I also left more than enough room in between frames, which made it easier to put together in post. I exposed for the background and then used the two strobes as fill and to stop the action. I love the way the Einstein’s can stop motion and if you look close every spoke in Chad’s front and rear wheel on the tuck is in focus. It’s amazing what a fast flash duration can do, especially with a spinning wheel. Once I had figured out the composition I basically set up the lights on the left and right of the frame pointing towards each other and got ready to shoot. With a trick like this, timing is key. When a rider starts trying something for a little while the pressure begins to build so when they finally actually pull if you better be ready. You also better be sure that your flashes are ready as well. It helps to keep an eye on them and shoot frames in between tries to make sure everything is staying consistent. Once Chad got it dialed and we got the shot we were both happy with the end result. The best part is that Chad didn’t see the finished photo until it came out in print. Can you imagine that? Waiting to see a photograph? In a time and place where living in the moment is everything, it’s nice to know that there are still supporters of print out there. Although it’s an ever-evolving medium, I hope it never goes anywhere, and continues inspiring generations of photographers to come.

That’s it for the seventh edition of WYDK. Always keep in mind that there is no right or wrong way to shoot a riding photo and I hope that each and every one of you that has an interest in becoming a BMX photographer fully understands that and explores every option when it comes time to shoot. Make sure to double check angles, look for unique locations to stand, get low, get high, climb on fences, climb on roofs, and do whatever it takes to get the shot. One thing I can say is that it sucks to get a photo back home only to check it and feel “shooters remorse.” Basically that happens when you see a photo and wish that you shot it with a different lens, at a different angle or with a different lighting set up. Also, always remember that being critical of your work is absolutely essential if you want to survive in the photo world so don’t be afraid to delete some photos and don’t be afraid to re-shoot. As long as you are progressing and learning from your mistakes, you are on the right track. On that note, be sure to check back next Wednesday for the one hundred and second edition of Through the Lens and as always feel free to leave any questions in the comments section or email me at info@jeremypavia.com and I will hit you back as soon as I can. Feel free to follow me on Twitter and Instagram @jeremypavia.

VISIT: FRONT PAGE // DAILY SECTION // BMX COLOR APP // BMX VIDEOS
You are here: Home / blog / Through The Lens: What You Didn’t Know – Chad Kerley
Note: This site contains affiliate links and we could recieve a small comission that supports this site if you were to make a purchase on their websites using our links.