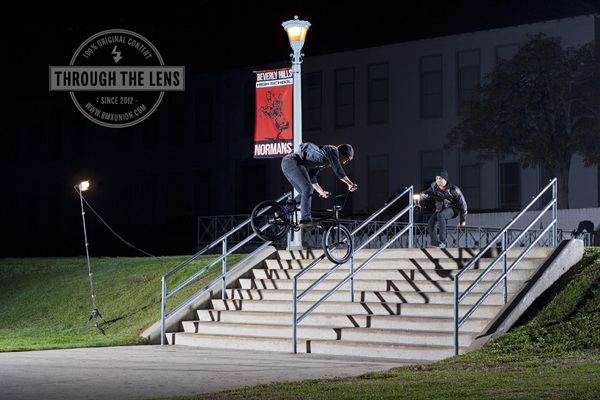 There has always been something intriguing to me about getting some behind the scenes details on a photo. I don’t know what it is about it but I just get stoked on seeing exactly how someone shot a specific photo and get a little insight into the process. I suppose it has something to do with the fact that every photographer shoots a little differently, which in turn makes each story unique in its own way. I can remember studying photos in magazines and borderline obsessing about the way that they were shot and honestly over the years not much has changed. I still find myself getting lost in photos to this day with the same level of curiosity that I had when I first started shooting. With that said, enjoy round six of WYDK.

Every once and a while there will be a photo that stands out to me as one of my “favorites.” And honestly, it doesn’t always have to be the most technically perfect image to fall into that category. Sometimes it’s simply based off of the subject matter or the vibe the photo brings me. Other times it is based purely off of the technical aspect. For example, if I really like the composition, exposure, sharpness, colors, trick, and subject matter then of course I will have to put it in the favorite category. In this case, I especially like this photo because of the story behind it. Every image has a unique story and it’s always an amazing feeling to look at a photograph, get lost in it for a while and be brought back to the exact time and place where you shot it. 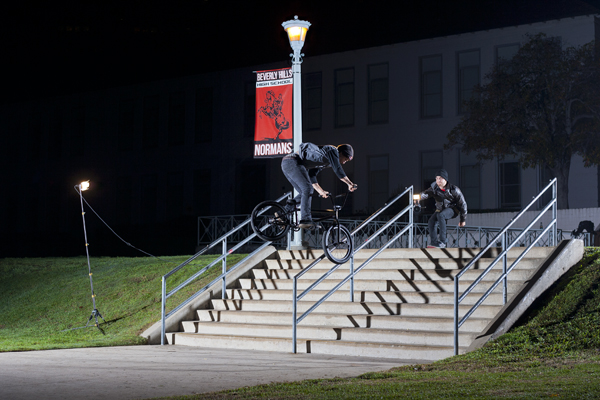 I actually shot this photo almost a year ago now and it’s crazy to think how fast time flies. I had been spending some time cruising with the Deadline crew while they made a few trips up to Los Angeles for some final filming missions. To say that these guys are into filming at night is an understatement. They spent night after night breaking out the generator and lights, making otherwise un-rideable spots perfectly ride able no matter what the time of day was. This makes for some interesting situations and you would actually be surprised at how much shit you can get away with in the middle of the night. We went to spot after spot lighting them up, running the generator and having a session without as much as sparking anyone in the surrounding areas curiosity. If you are down to put in the work, and don’t mind a crazy schedule. The night shift is the way to get shit done.

So, the reason I chose to talk about this image was because of the crazy path it took before finding a home in The Albion. It was offered up to Ride Magazine, and at one point Nike and Red Bull both had an interest in it as well. The thing is, as a freelance photographer, the way that I make a living is from selling my work, creating original content for different media outlets, as well as doing some commercial work on the side. When it comes down to it, in order for me to continue to create new work, I have to have the funds to do so. Which is where selling photos comes in, which is why that is always my first intention when I shoot a photo that I’m happy with. The more photos I sell, the more photos I will be able to shoot, and the more BMX that I get to capture. In this case, as soon as I shot the photo I knew that I wanted it to end up in print. I was honored to have the chance to shoot with Garrett and not too mention it was during some of the final filming missions during the filming of the Deadline DVD. So, my initial thought was to have the photo published either by itself, or as an ad. Either way I would have been equally as stoked. But one of those ways obviously pays more than the other. After the dust settled, and I went back and forth with a few companies I ended up contacting The Albion and offering the photo up for print. They decided to run it and I was just as happy as if it would have gone to Red Bull or Nike. I just knew that I wanted the photo to end up in print one way or another and luckily everything worked out. It landed itself in issue #13 of The Albion, which you can actually check out and read online for free right now by clicking HERE. 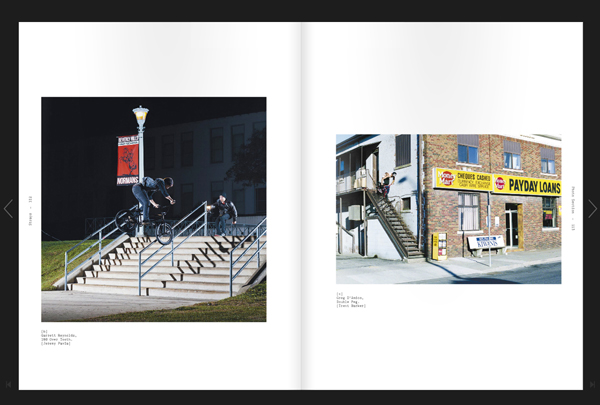 The photo itself was shot at Beverly Hills High in Beverly Hills, California. As I was saying, we were on a night mission and ended up here after already filming and stopping at a few spots earlier in the night. I don’t even remember what time we showed up here but it was late as hell. As everyone was setting up the lights and getting ready to pull out the generator someone realized that there were outlets right on the bottom of a few light posts so they just ran extension cords and lit it up in silence. This was for sure the only way we got away with being at this spot for so long. It is right in a neighborhood and the generator would have definitely been pretty noisy. After I set up using a cross lighting pattern with my Einstein strobes, I focused on the rail and waiting for Garrett’s signal that he was ready. This was one of those times where I couldn’t miss the timing, and I simply had to be on point. There was no option otherwise. Garrett ended up trying this I think maybe two times before this one and the one you see here was the third try. He pulled it first go but wanted to do it a little better simply because he knew that he could. It was so dark when I was shooting that I swear I was waiting to hear his peg hit the rail to shoot because I couldn’t really see otherwise. It was one of those times where instinct had to kick in and I just had to make it work. Luckily, everything worked out and we got the photo. Not too long after we got the shot, which was at 5:46AM, a school employee walked out of the front door looking at us like we were crazy for being there. Keep in mind that he was there to open the school. He mentioned that we needed to get the hell out of there because there will be people coming soon. That’s when I realized that we had shot throughout the entire night and into the morning. 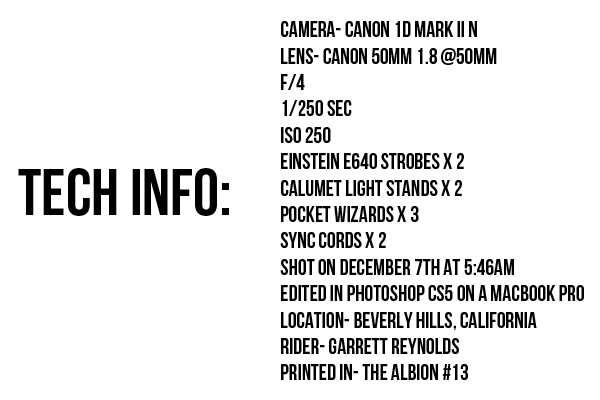 With this specific photo I wanted to make sure you could really get a feel for the scene and show all aspects of what was going on. You can see one of the lights that were plugged into the outlet helping to light up the rail, Miles Rogoish getting’ that rolling fish shot, the Beverly Hills banner on the light pole, the skate stoppers on the outside rails, the two on the top of the middle rail and more. Garrett being the bad ass that he is caught a good portion of the rail and if you really sit and think about what he’s doing it’s really crazy to think he did it this dialed in three tries. The thing that I love most about BMX photography is that these moments in time take so much work to catch, and the specific moment that best shows the trick happens for only a fraction of a second. Not only that, but to think of how much goes into just getting a single photo like this is wild. It’s amazing to see it all come together though and that is what happened with this one making every bit of effort worth it.

Since I didn’t know initially where this photo was going to end up, I was beyond stoked to know that it was going to show up in the pages of one of my favorite magazines out there. I want to send a big thanks to The Albion way for being down to print my work, and I want to send a big thanks out to Garrett and the Deadline Crew for showing the realest side of BMX out there. Those guys live, eat, and breath BMX and it shows in their riding. Be sure to support the crew.

And be sure to check out DeadlineCrew.com to keep up on all things Deadline.

That’s it for the sixth edition of WYDK. Always keep in mind that there is no right or wrong way to shoot a riding photo and I hope that each and every one of you that has an interest in becoming a BMX photographer fully understands that and explores every option when it comes time to shoot. Make sure to double check angles, look for unique locations to stand, get low, get high, climb on fences, climb on roofs, and do whatever it takes to get the shot. One thing I can say is that it sucks to get a photo back home only to check it and feel “shooters remorse.” Basically that happens when you see a photo and wish that you shot it with a different lens, at a different angle or with a different lighting set up. Also, always remember that being critical of your work is absolutely essential if you want to survive in the photo world so don’t be afraid to delete some photos and don’t be afraid to re-shoot. As long as you are progressing and learning from your mistakes, you are on the right track. On that note, be sure to check back next Wednesday for the ninety third edition of Through the Lens and as always feel free to leave any questions in the comments section or email me at info@jeremypavia.com and I will hit you back as soon as I can. Feel free to follow me on Twitter and Instagram @jeremypavia.

VISIT: FRONT PAGE // DAILY SECTION // BMX COLOR APP // BMX VIDEOS
You are here: Home / blog / Through The Lens: What You Didn’t Know – Garrett Reynolds
Note: This site contains affiliate links and we could receive a small commission that supports this site if you were to make a purchase on their websites using our links for no extra charge to you.