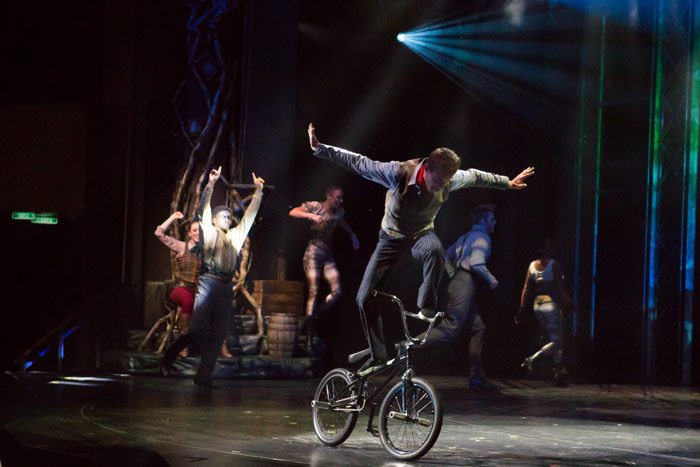 A few months back, our friend and photographer Nick Nogueira hit us up about a trip that he was taking to meet up with his brother and flatland rider, Mannie Nogueira, who had been spending the past few months riding BMX during live shows on a cruise ship. Nick asked if we would be interested in checking out the final results once he got back, and of course we couldn’t turn that down! We hadn’t heard anything, then today Nick hit us up with some words and a bunch of photos from the trip where he got a front row seat into just what Mannie had been up to lately. We’ve seen BMX pop up in some interesting places and we’ve seen BMX lead riders to places all around the world doing what they’re good at. This is definitely one of those interesting places and stories to say the least, and it left us a little bit jealous! Take a look and see just why!

Check out the full story and more photos below…. 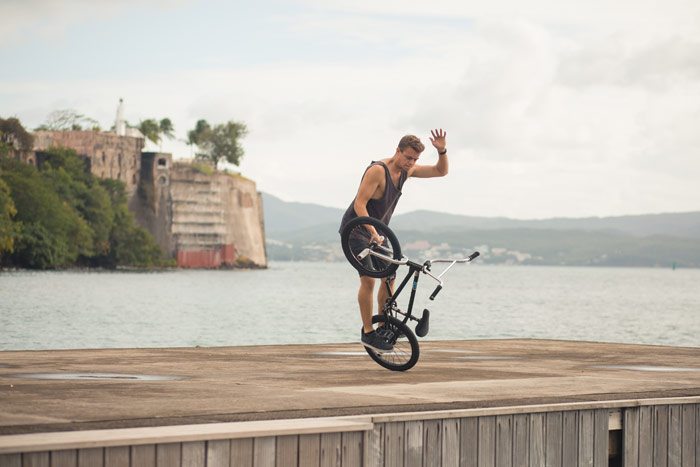 “I was lucky enough to be given the opportunity to explore and photograph six of the Caribbean Islands with my brother Mannie while aboard The Anthem Of The Seas cruise ship. Each day of the cruise brought us to a new island, ranging from Haiti to St. Kitts. Throughout each of the six stops, Mannie and I made it our goal to get one photograph per island, each photo containing a different trick! If you were to ask me I would say we reached our goal with flying colors. Well, thats enough talking for me, now you’ll get to hear from Mannie and what its like being a BMX Flatland performer on a Cruise ship. The photos I took throughout my trip with him will be featured throughout this article! Hope you enjoy!” – Nick Nogueira 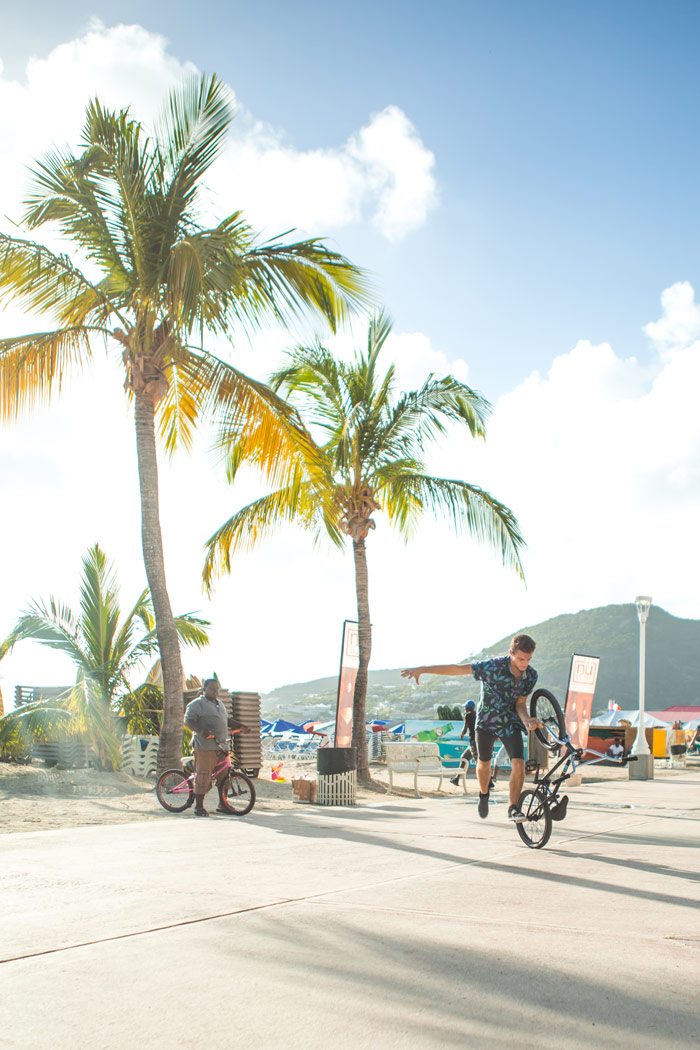 BMX on a Cruise Ship?

Ever wonder what its like to ride BMX on a cruise ship? Probably not. But for me this is a reality!

Last winter I had recieved a Facebook message from the homie Dane Beardsley. Dane had been doing shows on a cruise ship and hit me up asking if I was interested in performing on the ship. Of course I was down, so Dane emailed a few of my edits over to the casting director for the show. After a few months I heard back and was stoked to hear they wanted me for the show! Within the next month I had quit my full time job and was about to start this new gig! 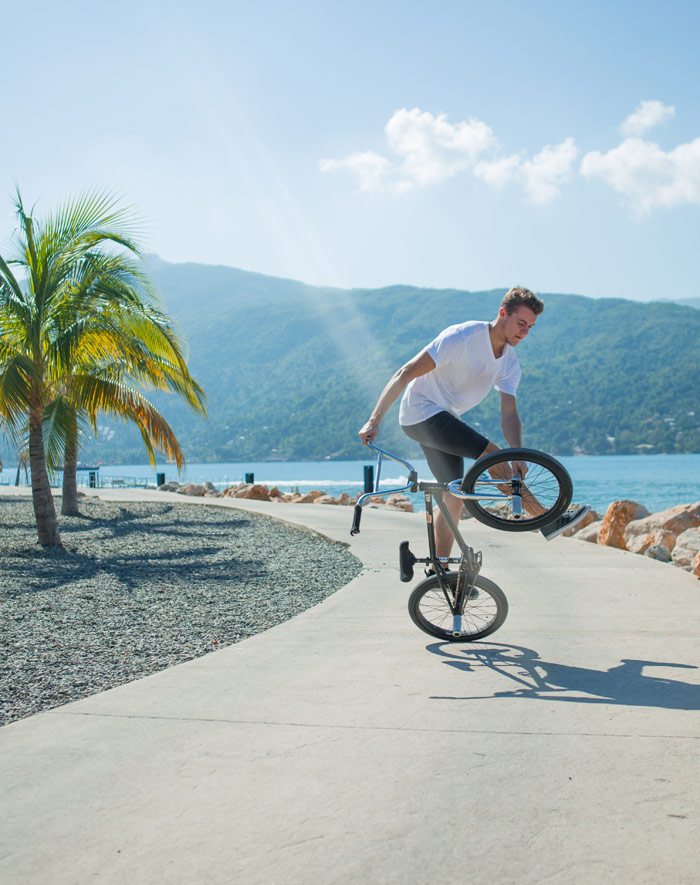 The end of June came and I was flown to Miami to start rehearsals for the show. I got there not really knowing what to expect because this was all new to me. After the first day I knew this was gunna be a crazy ride. About 3 days in, I learned I had to do some acting in the show and that scarred the hell out of me. After some acting lessons from the director and a lot of time in my room practicing, I could do “some” acting, haha. I never realized how awkward it could be to act in front of people, but I learned the key is to not care what the audience thinks. Another first was having to finish tricks on time, so I’m done riding at the perfect moments. Soon I was put into the show and after many, many rehearsals we had a full run through for the office at the end of July. The next day I was sent back home to be flown out at the end of August to London, England! 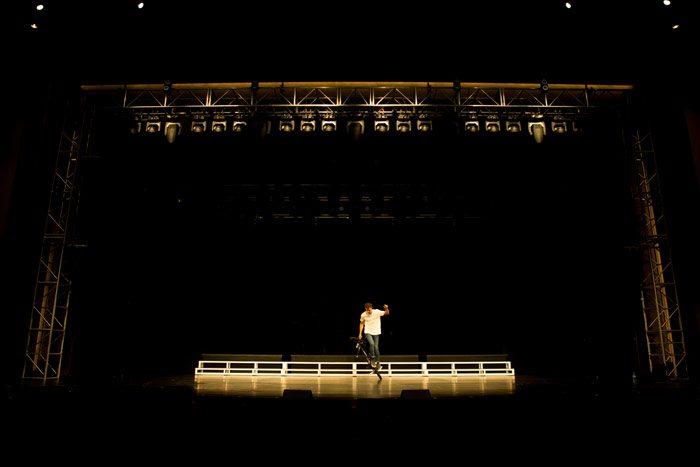 September 1st was my first day on board and damn was this ship huge. I had never been on a cruise ship before, so had I no idea what to expect from this ship. Once we settled in, we started rehearsals on the ship and had my first experiences with riding on a rocky cruise ship.. You wouldn’t believe how difficult some of the easiest tricks are when the boat is rocking. The worst part was the airlines lost my bike for 2 weeks and I had to rehearse on Dane’s bike. Luckily my bike came in the day before our first show on board! I was stoked! The next day we did the show and it was great! Amazing to ride flatland in front of over 1,200 people per show! I love showing people what BMX is! 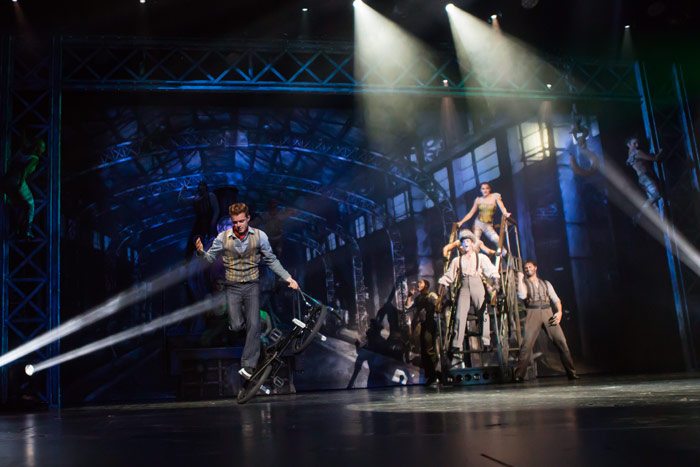 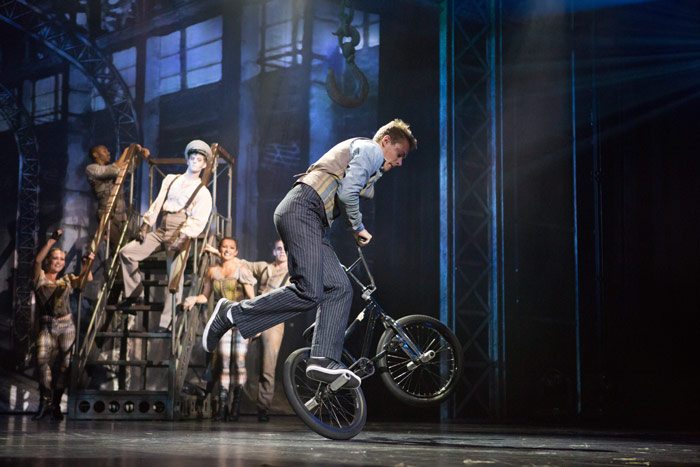 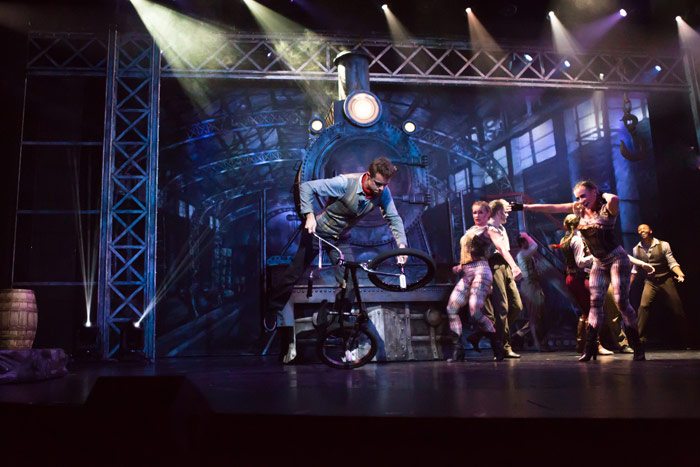 Over the course of the he next 2 months, the ship was in Europe traveling all over to Spain, Portugal, Canary Islands, England and France. Europe was amazing but the itinerary changed for the winter and we crossed the Atlantic and started cruising out of Bayonne, New Jersey. I had high expectations about the Caribbean because of how great Europe was, but after the first cruise I wasn’t so stoked on these islands. Many of these islands we go to are mainly just beaches and that’s it. No spots to ride at all and some places are so sketchy… Actually most places there are sketchy, Haha. Other than riding off the boat I have about 2 hours per cruise of time to practice on stage. Just 2 hours. It kills me not riding all the time. A regular show day consists of waking up and grabbing some food, then getting off the boat at a port. Most likely I would ride around town for a little and try to find a spot to get in a sesh or maybe just exploring the island with some friends. After grabbing some food on the island I would come back on the ship and get ready for a show or two. After finishing up the shows, it was off to the crew bar to party a little! 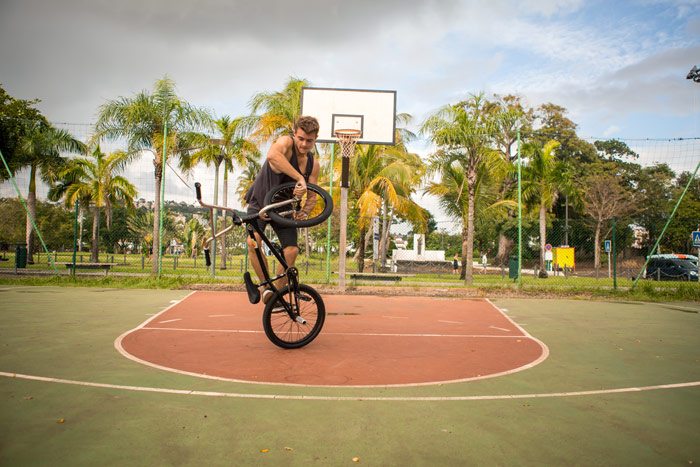 This was the last few months of my life. I’m so stoked to have this opportunity to travel and perform on my bike! It has definitely been a dream come true! Shoutout to my Mom and Dad for supporting me in this adventure, all the support from my family and friends, my sponsors DECO BMX, Visitor Co, Quest bmx, Quarter good, BMX Union for posting this, and everyone else who supports what I’m doing! 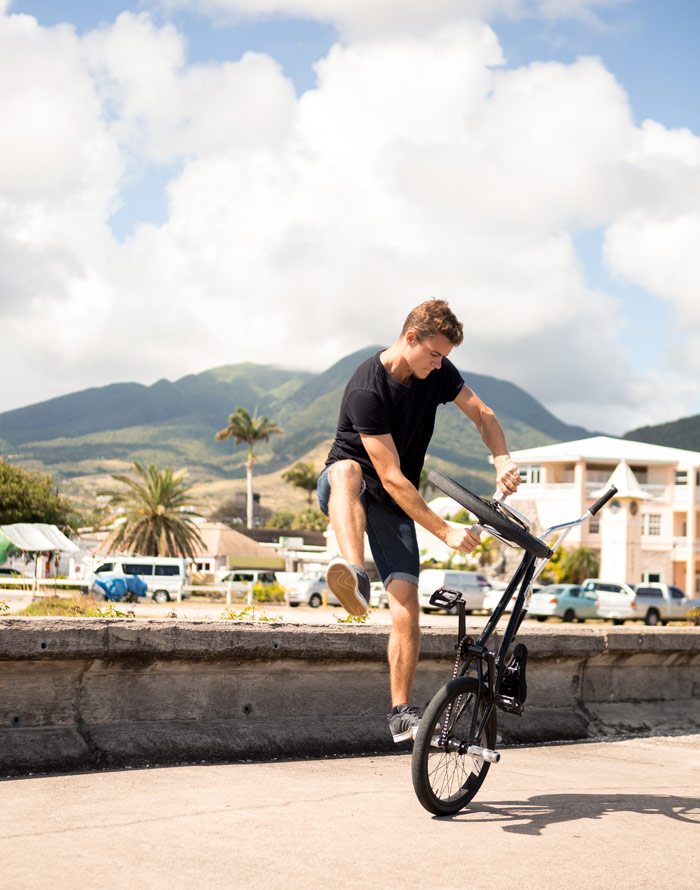 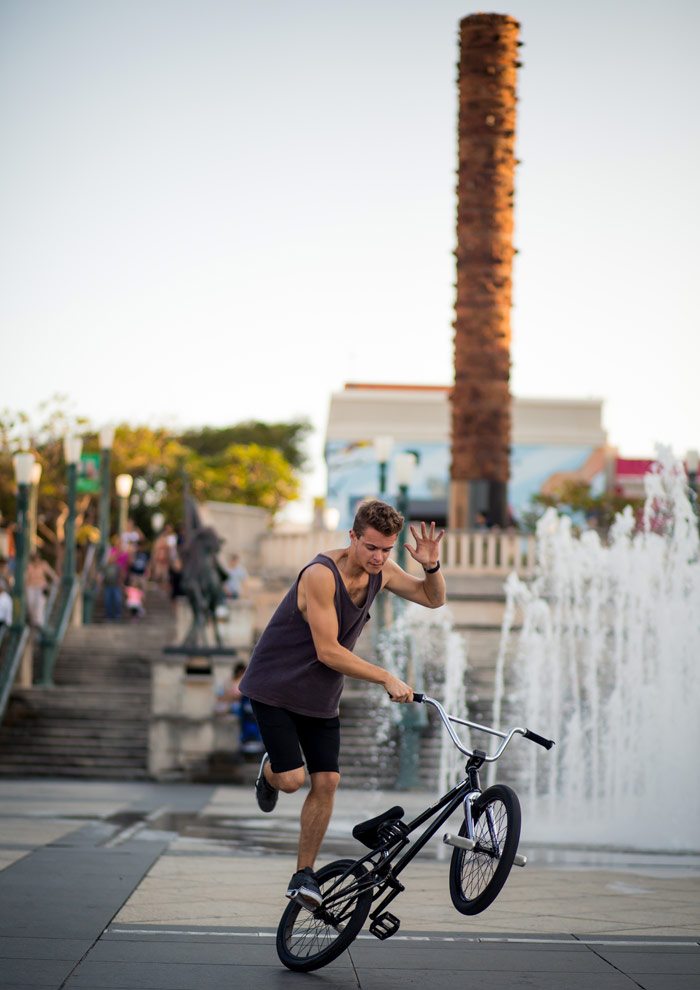 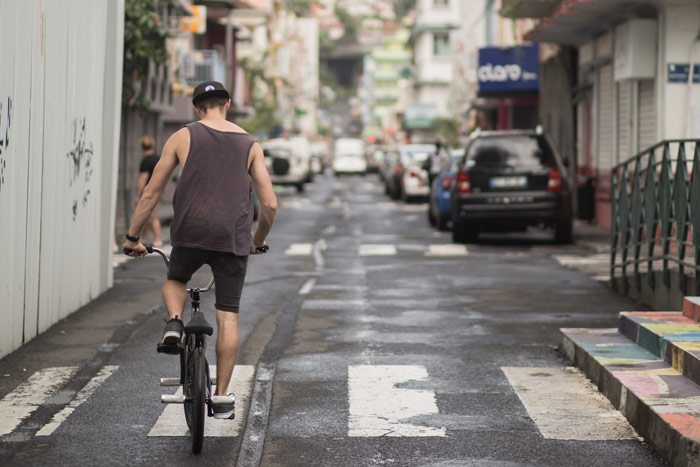 You are here: Home / blog / Life On A Boat with Mannie Nogueira
Note: This site contains affiliate links and we could recieve a small comission that supports this site if you were to make a purchase on their websites using our links for no extra charge to you.