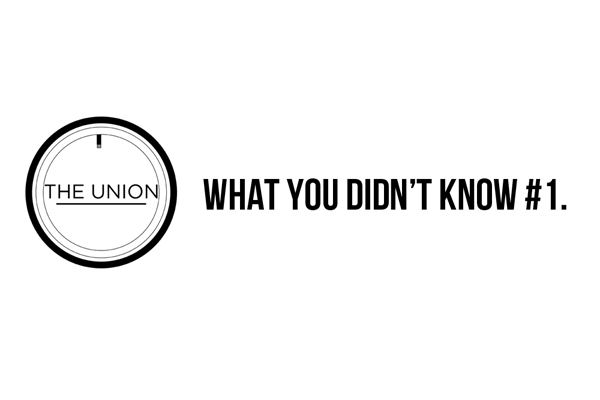 There has always been something intriguing to me about getting some behind the scenes details on a photo. I don’t know what it is about it but I just get stoked on seeing exactly how someone shot a specific photo and get a little insight into the process. I suppose it has something to do with the fact that every photographer shoots a little differently, which in turn makes each story unique in its own way. I can remember studying photos in magazines and borderline obsessing about the way that they were shot and honestly over the years not much has changed. I still find myself getting lost in photos to this day with the same level of curiosity that I had when I first started shooting. I suppose that is why I am introducing “What you didn’t know” for today’s TTL. Ready, set, go.

Over the years I have had the chance to shoot with the majority of current day pro riders and am seriously honored that I can even say that. There is a list of riders out there that I happen to have shot with on numerous occasions since moving out west five years ago and one of the riders on that list is Biz. He always delivers the goods and has his own unique swagger on two wheels making him a treat to shoot with. I went out to Riverside for the day to meet up and chill with the crew and try to get a few photos along the way. Biz had this photo in mind and knew that he wanted to double peg it. I gotta’ give Jason Enns a shout-out for hooking this spot up. Jason is always on the hunt for spots and puts a lot of effort into finding new shit and once he saw this spot he knew it had Biz’s name written all over it. 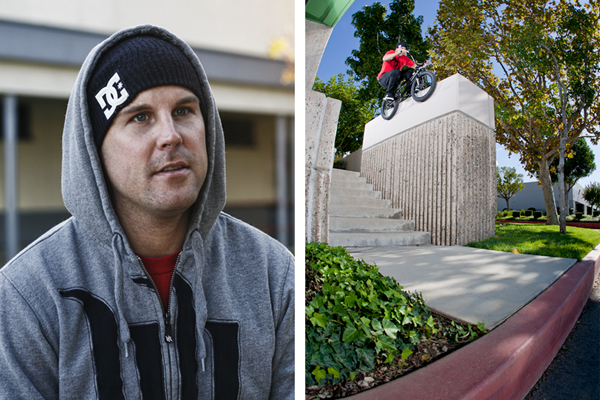 When we first got there Biz started eyeing it up and taking a few looks at the set up. This is usually when I spend a few minutes to take it all in and really try to make a plan for how I want to shoot the trick. I knew that it was going to be a double peg grind to gap over the curb so I had to incorporate that into the photo as well. I typically analyze the scene first and pick my angle while I decide if I want to shoot long or wide. Once I decide on my spot and angle I take a shot of the scene. Then I review the photo and if I am happy with the angle/lens selection then I start to think about where I want to put my lights. When I light up a photo mid-day I try to use as many flashes as I can and in this case I used four. The ledge/stairs and sidewalk were completely dark and in the shadows without flashes and if I had any chance of balancing out the exposure between the set of stairs in the foreground and the blue sky in the background I was going to need some power. 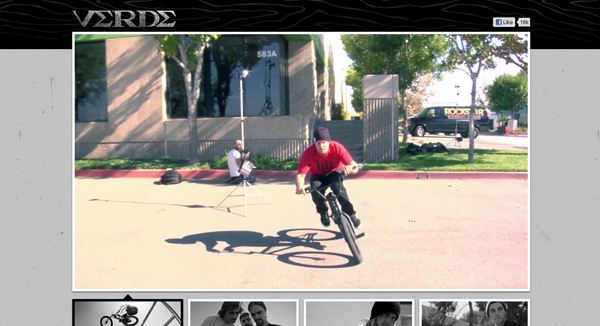 For the flash breakdown I had one Lumedyne directly to the left of Biz hiding behind the ledge, which lit up his bike, and provided a highlight and some definition on his left side. I had my Quantum flash set up back and to the right of Biz pointed towards his back hidden in a doorway. This helped separate Biz from the dark trees in the background especially with the black jeans, black beanie and black bike. On a side note, this is exactly why bright shirts help make photos look good. So, to anyone out there looking to really make a photo pop or give it some extra color ask the rider you are going to shoot with the bring a few different shirt options. It sounds dumb but trust me; there will be times you absolutely wished the rider had a different colored shirt on. In this case, Biz is the man, and has been doing this shit for years and had the bright red shirt ready to go. Not too mention we got a little color-matching bonus with the red curb so it definitely helped. My Sunpak flash was set up on the ledge almost directly to the right of Biz again to help make him pop. Lastly my other Lumedyne flash was set up in front of the ledge, slightly to the right of where Biz was going to land. This was the main flash I used to fill the stairs and basically the entire front part of the scene.

I was shooting at 1/320th of a second, which you can get away with in bright daylight without getting a dark line in your photo. Any time I can get away with shooting with a faster shutter speed I do. The faster the shutter, the sharper the photo. If I recall correctly I had the Quantum and Sunpak set to ½ power for a faster flash duration and the Lumedyne’s were both set at full power. I had the ISO set at 100, which I always try to shoot at if possible. I also shoot simultaneous raw + jpg files for one because you never know if one file might end up corrupt and for two, you get the most file information from a raw photo so why not maximize your cameras potential and shoot at the highest quality setting. The more information you have in a digital file, the better so always keep that in mind. For this specific shot I was actually kneeling down and getting pretty low to put some emphasis on the fact that he is gapping out past the curb. Biz ended up giving it a few goes and I think he rolled away clean on the third try or so. He grinded it perfectly each go but his foot kept blowing off from the drop when he landed. Just as it’s a rad feeling to be the first to grind a new ledge it’s also always rad to shoot at an unseen spot and be the first to clock a photo there so props to Biz for making this one happen. 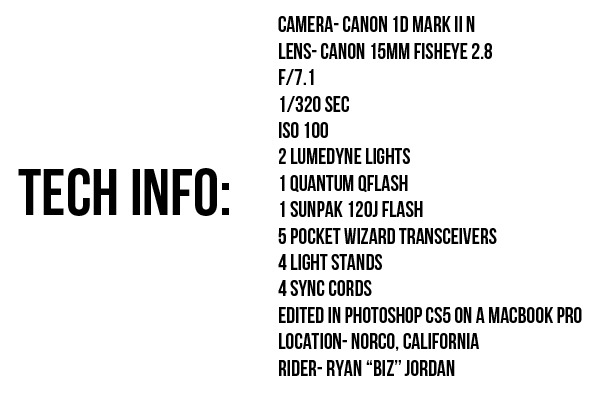 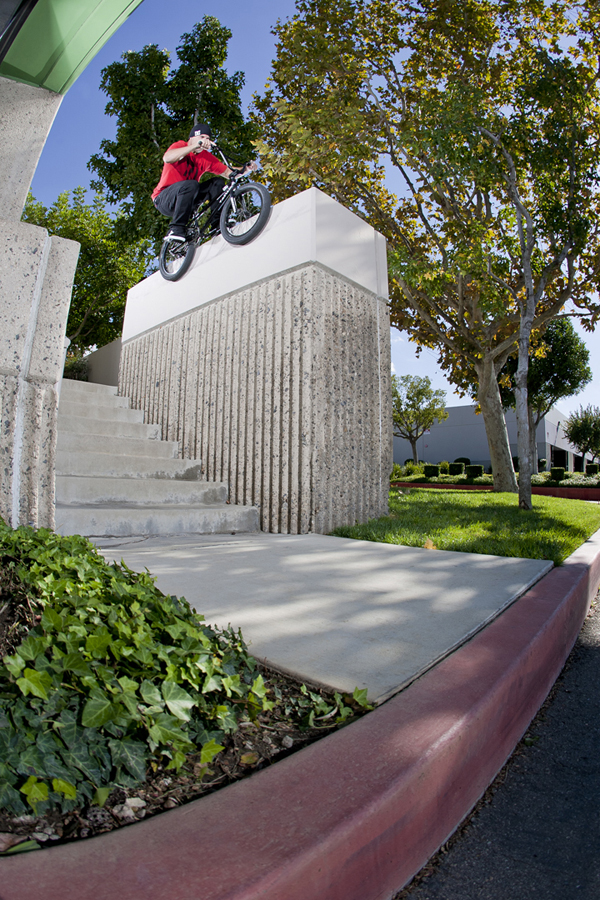 There is no right or wrong way to shoot a riding photo and I hope that each and every one of you that has an interest in becoming a BMX photographer fully understands that and explores every option when it comes time to shoot. Make sure to double check angles, look for unique locations to stand, get low, get high, climb on fences, climb on roofs, and do whatever it takes to get the shot. One thing I can say is that it sucks to get a photo back home only to check it and feel “shooters remorse.” Basically that happens when you see a photo and wish that you shot it with a different lens, at a different angle or with a different lighting set up. Also, always remember that being critical of your work is absolutely essential if you want to survive in the photo world so don’t be afraid to delete some photos and don’t be afraid to re-shoot. As long as you are progressing and learning from your mistakes, you are on the right track. On that note, be sure to check back next Wednesday for the fourteenth edition of Through the Lens and as always feel free to leave any questions in the comments section or email me at info@jeremypavia.com and I will hit you back as soon as I can. Feel free to follow me on Twitter and Instagram @jeremypavia. There will also be a new photo contest announced soon as well so keep an eye out for that and get ready to get out there and shoot for your chance to win some rad shit.

You can check out the video clip of this photo in Biz’s latest edit for Verde.

Posted: May 16, 2012 Tagged With: Jeremy Pavia, Ryan Biz Jordan, Through The Lens

You are here: Home / blog / Through The Lens: WYDK: Featuring Ryan “Biz” Jordan
Note: This site contains affiliate links and we could receive a small commission that supports this site if you were to make a purchase on their websites using our links for no extra charge to you.