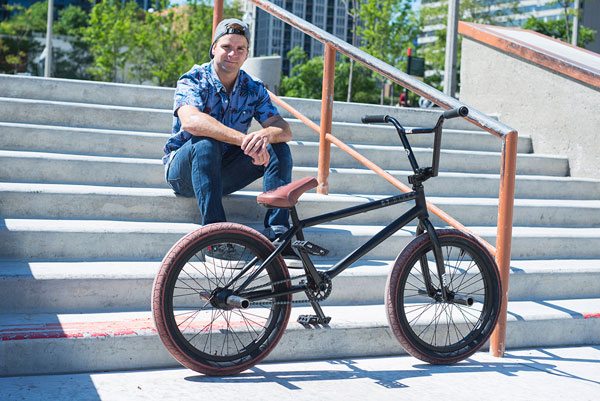 If there’s one guy that we always love catching up with, it’s Brian Kachinsky. Brian is always getting into something new and exciting and is never slowing down — unless he’s taking a gnarly slam, which happens from time to time. Brian recently joined the GT Bicycles team and we’re pretty excited about that because it seems like there has been a lot of energy going back into that program over the past year. We had noticed a photo of his bike a little while back and spotted a handful of prototype parts on it, so we figured now was a great time to catch up with Brian and take a closer look at the BMX bike that he calls his these days. Let’s take a closer look! 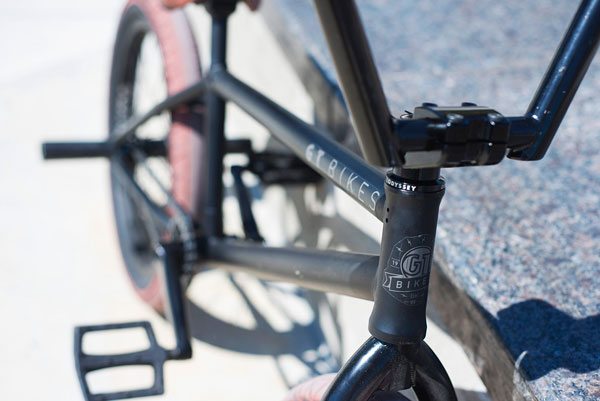 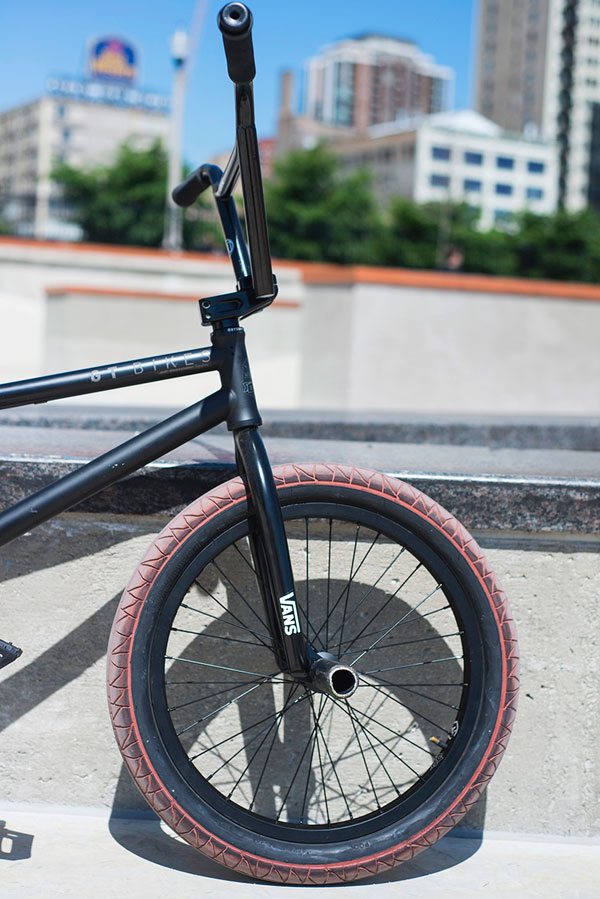 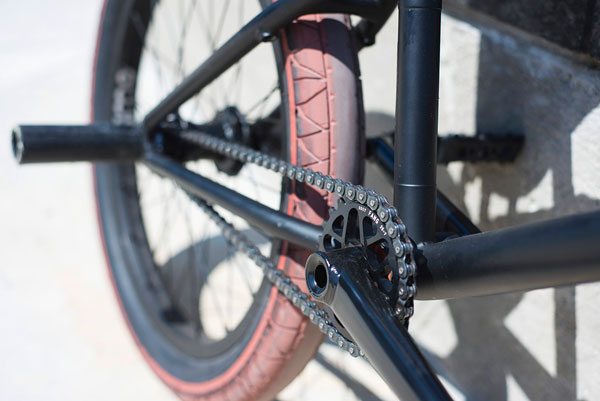 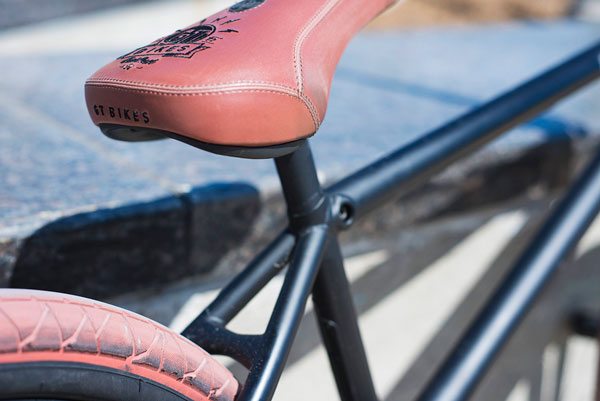 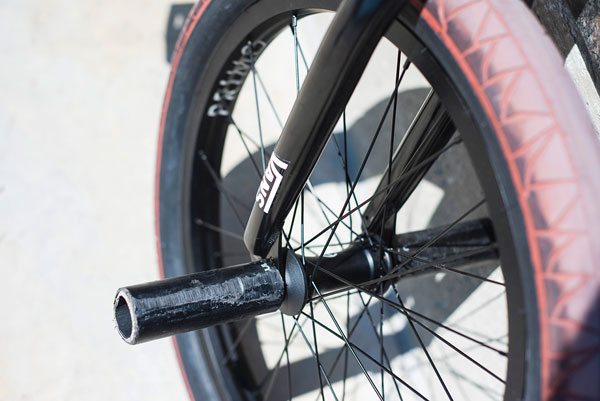 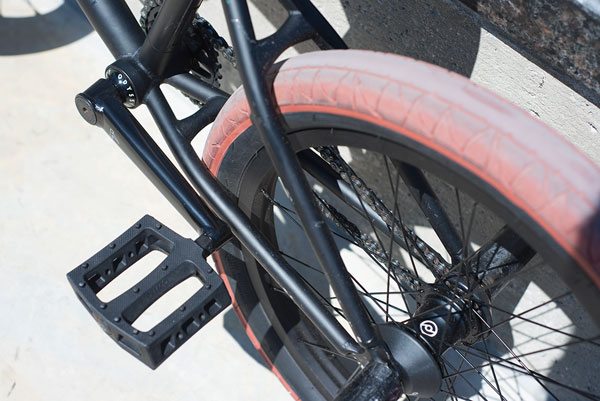 Modifications:
I cut about a half inch off each side of my bars and about an inch off my seat post

What’s the newest part on your bike?
All the Odyssey and Primo stuff is pretty new. Thanks to both of them for hooking up the fresh stuff!

What’s the oldest? Does it hold any sort of sentimental value to you?
Currently nothing is more than a couple months old and feeling great! 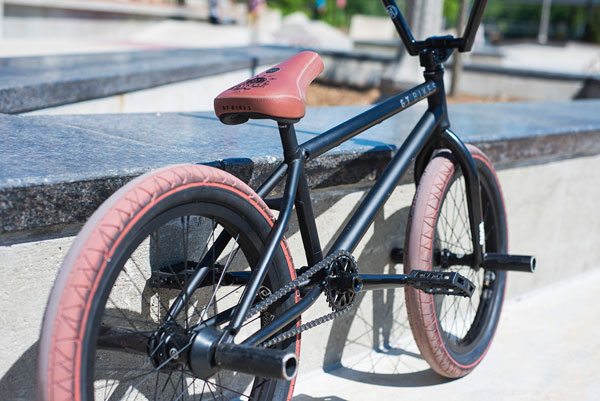 Are you pretty particular with how you like your bike setup or are you pretty flexible? Do you have any preferences as far as frame specs go, bar height, bar angle, tire pressure or anything?
I like a taller front end but I’m not a super tall guy, so it’s not VERY tall. I run my pressure a bit lower when I’m riding street and plazas but like it higher when riding ramps/bowls. For the most part I just like everything tight and clean so it runs smooth and doesn’t rattle.

How often do you build up a new bike? Do you usually run parts until they’re dead or do you stay ahead of the curve and swap them out before you get caught up in a sketchy situation?
I usually just get new parts as needed and don’t build up an entire new bike very often. I do bring extra tubes, bolts and spokes with me when I travel in case I break something but overall I’ve had pretty good luck.

Over the years we have seen you change your setup from running front and back brakes and two pegs to four pegs and no brakes. Any plans of some drastic change ups any time soon? Maybe a return of the front brakes?
I won’t be running brakes anytime soon but thankfully I have some friends with brakes on their bike if I feel like doing some brake tricks here and there. Overall I’m happy with my bike at the moment but I sporadically change things up. As long as I’m having fun with my bike I’m happy.

So far, since Ben Ward has taken over as team manager and handling other roles with the brand, it seems like GT have had a lot of projects cooking including a lot of new parts that we’re seeing on your bike. Care to talk a little bit about some of the prototypes you are running?
Yeah! Ben Ward running the product side of things and helping with team stuff has been awesome. He has a good vision and great taste in designing things. Him and Steve Spencer tag team the TM side of things and they are both awesome. I’m excited about them bringing back an updated version of the OG 4 piece bars and the Pool tires have been great also. 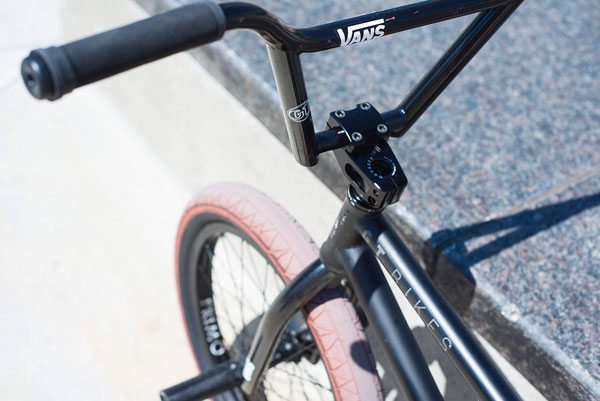 Any chance we’ll see a Brian Kachinsky signature frame or parts from GT in the near future?
I have some signature complete bikes coming out soon which I’m pumped about and there is talk of other fun stuff down the road.

You guys just wrapped up a big team trip a few weeks back. How was that? When will we be seeing some footage pop up from that one?
The last trip to Kansas City was amazing and the team trip back in January in Cali was amazing also. We have a great crew and a couple more trips in the works for this year. You’ll be seeing some footage and photos in Ride BMX magazine and a full video online soon also. Jeff Z and Zach Krejmas are fun to work with and hang out with on trips. Wait until you see some of the stuff that went down on this last trip. Spots were shredded, some skin was lost and great friends were made. It was a wild one.

Do you have any more trips planned with the GT guys this summer? Anywhere in particular you are hoping to get to that you haven’t had the chance to go yet?
We are talking now about when/where the next trip will be but so far we have been to some awesome places. I’m always willing to go anywhere to ride bikes. Whether it’s in my hometown or halfway around the world, going on trips to ride bikes, check out new spots and enjoy the streets with a good crew is what gets me motivated the most.

How are things going with Vans these days? It seems like you’re always working on something with those guys? Any trips, signature shoes or anything cool coming down that pipeline?
There is always crazy stuff in the works with Vans. We have a stacked team, everyone kills it and most of all we are all good friends. It’s a perfect recipe. We are currently working on a full length video which will be crazy. I can’t wait to see how it all comes together. 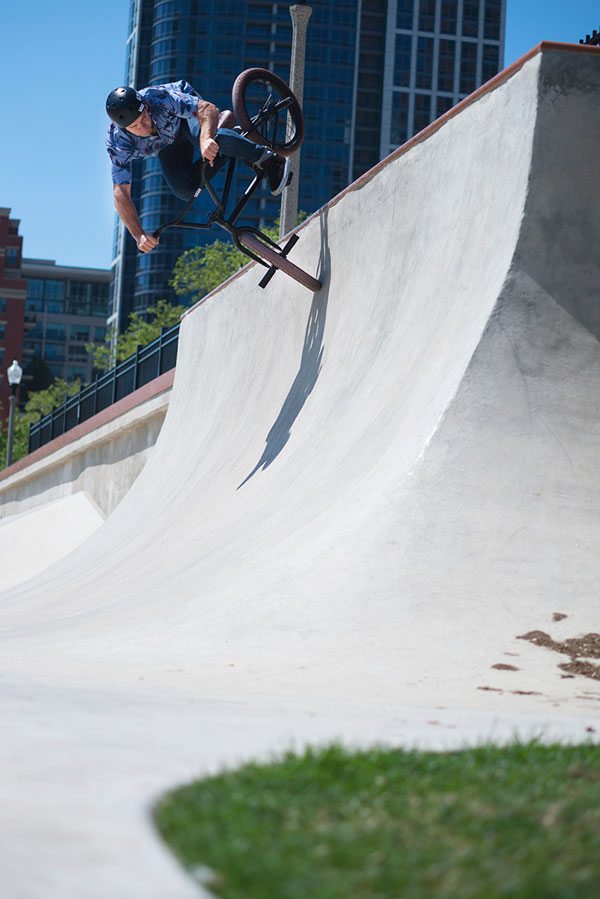 A little while back the new Grant Park Plaza in Chicago opened up that you had quite a bit of involvement with. How have the sessions been there so far?
Grant Park is incredible! To have a park like that in the middle of the city is incredible. Getting bikes involved and allowed in the park was a huge achievement which I’m proud to have played a role in. They are already hosting Dew Tour this year and it’s been great meeting point for everyone to get together and enjoy. What I’m stoked about most is the various crews of younger riders that frequent the park and are progressing like crazy because of it. That was one of my main missions. Many of those younger riders also showed up to the park meetings which was amazing to see them support something that will make their future better.

Isn’t there the potential for another park that you are getting involved with? Any details you can share on that?
I am working with the Chicago Parks District on some projects that I’m excited about. I’m on the advisory board for those projects and they are all looking to be awesome. I don’t want to say too much since right now it’s nose to the grindstone with some of those things. There are a ton of meetings and challenges with this sort of thing but in the end it’s all worth it to create more places to ride.

Speaking of the Grant Park Plaza, you’ll be leading the way for the The Street Series stop that will be rolling through Chicago on July 18th. What can we expect from that one? Anything special planned for that, that you can let us in on?
That day will be insane! Grant Park is our meeting place and I’ll be figuring out the route we’ll take through the city along with some other locals like Timmy Theus and Trent McDaniel. I anticipate a ton of people getting together and having a good time. Dan Lacey, Bruno Hoffmann and some other guests will be present as well to help lead the charge. It’s going to be awesome having those guys in town and also looking forward to all the midwest riders that will come out for it as well. Getting this huge scene together at once will be amazing.

We’re always pumped on some fresh footage of you to surface. Have you been filming for anything lately? Any chance we’ll see a new edit out of you in the near future?
I have been filming around the Chicago / Midwest area with Andrew Brady and Trent McDaniel. I’m really happy with some of the stuff I have on deck already and look forward to filming more this summer when I’m around the city. We often do little day missions to nearby cities/states as well to explore new fresh spots. I always like to have footage waiting for whatever project comes up. Some of this stuff will end up in the Vans video and other clips for web stuff. Pumped to see how all the projects come together once I round things out footage-wise.

You and Jeff Klugiewicz have been busy designing the course for the 2nd round of Munich Mash, right? How’s that all coming? When is that going down again?
Munich Mash in Germany will be June 27-28th this year and is going to be insane. Jeff K is the man and I love working with him on these courses and other projects. This time around we did several course designs for the event while also working with some German skateboarders with what they would like to see for their portion of the event. It’s always a challenge to try to put together a course that everyone will like but I’m sure it’s going to be blast. The final design actually ended up with a bunch of the obstacles we had on last years course but will some new fun tweaks and changes that will make it one of the most progressive contests of the year once again. I’ll be judging that event along with Jeff K. We always love seeing what we dreamt up become a reality. 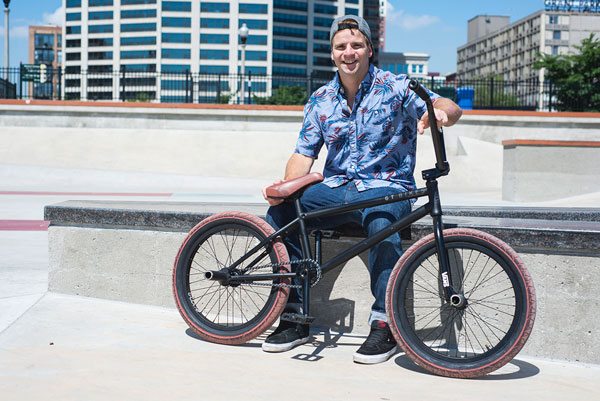 What have you been getting into when you aren’t riding these days? Any new hobbies or projects you have been keeping yourself busy with?
Other than riding I have been keeping busy hanging with friends, working on side projects with the city parks, course designs, product ideas, promo efforts, hanging with my lady and recovering from some little injuries I’ve had. Luckily none of them have kept me down for very long. I have also partnered with Comcast (internet and cable provider) to work with them on some promotions for the coming months. That will be a fun one. I also love attending random events my friends are involved with around the city. It’s fun to see people doing progressive things in industries that have nothing to do with BMX. Those things motivate me to ride and keep me from getting burnt out. It’s perfect.

Do you have any shout outs or thanks?
Yes! Thanks to my family and friends for always being awesome and keeping me motivated, healthy, happy, laughing and inspired. Thanks GT and Vans for keeping me rolling and enjoying every single day. Thanks to my girlfriend for being a great cheerleader and putting up with my travels and odd hours which is far from the regular 9-5 routine. Thanks to everyone who I’m connected with on social media and for keeping me constantly entertained. Thanks to Andrew Brady, Timmy Theus, Trent McDaniel and every single rider in the Chicago BMX scene. Summer is a time we always look forward to and this summer might be the best one yet in Chicago!

Anything else you want to say?
Escape your comfort zone. Don’t let fear get in the way of progression. Get rad everyday.