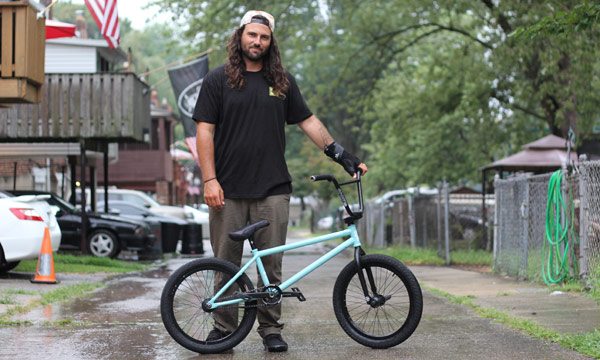 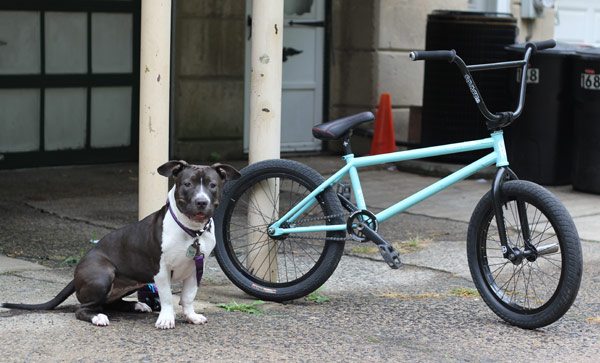 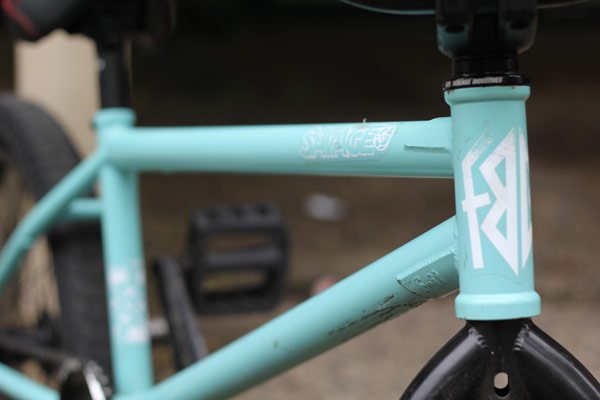 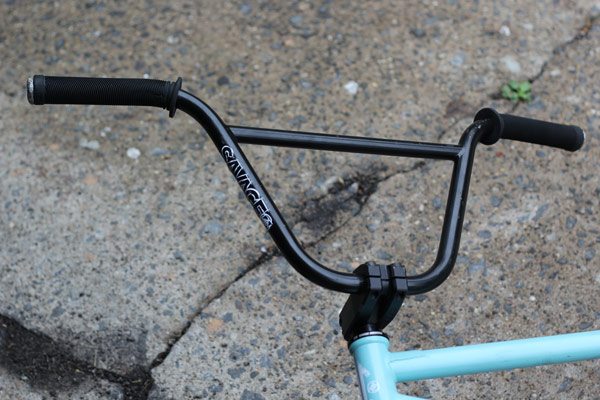 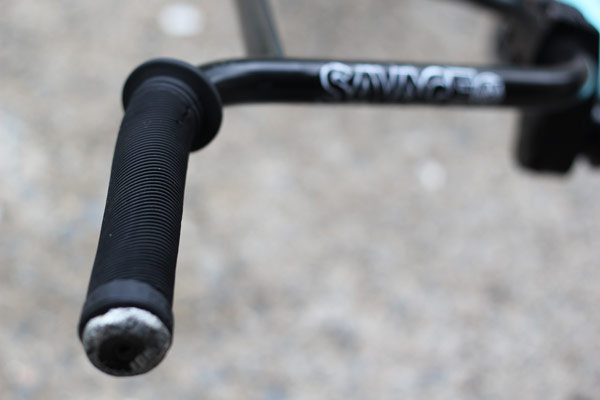 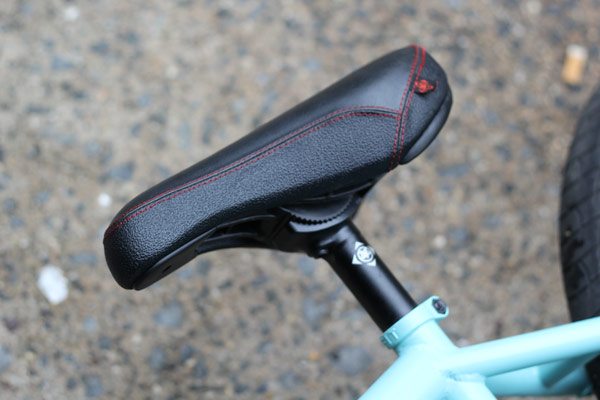 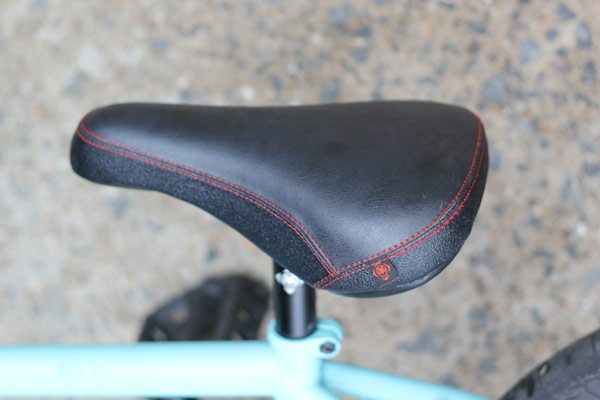 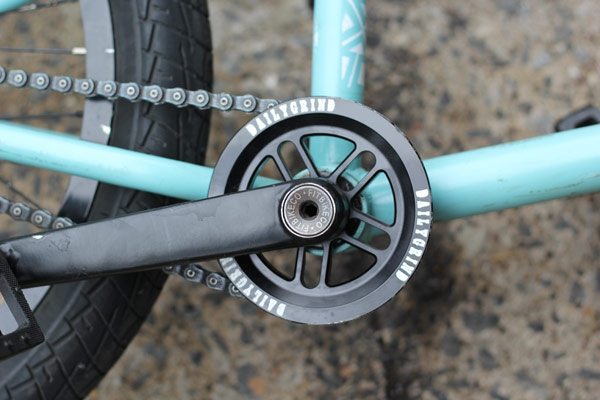 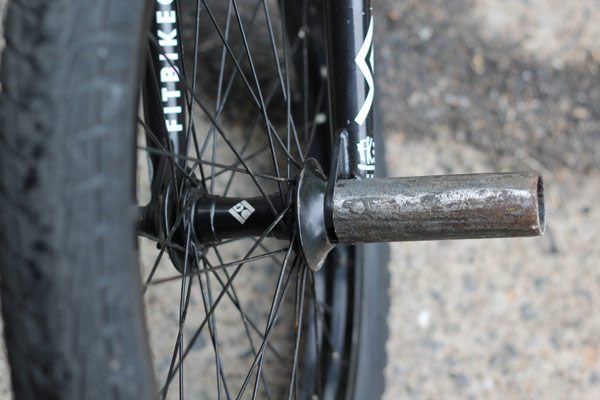 Rear Wheel: A very old Freecoaster with a bunch of brands pieces keeping it rolling, its about time for a new one. Laced to a hazard lite as well. 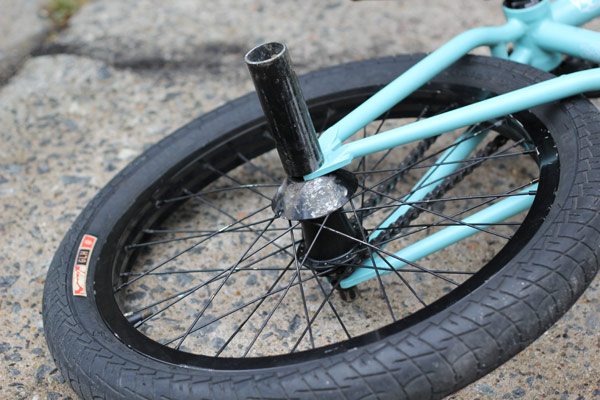 Modifications: I cut my bars down a little, other than that its all just built and ready to ride.

Since this bike is pretty much new… What’s the oldest part on your bike? Does it hold any sort of sentimental value?
I’d say my pegs and guards are the oldest parts. They were the first parts I got from The Daily Grind. Seriously still going strong.

Did you change anything as far as top tube length, bar height or anything like that with this bike versus your last or are you pretty consistent?
Once Fit gave me the opportunity to design a frame and bar with the sizes that I wanted, I have not felt the need to change anything. My bike is designed for the taller rider who rides street. Me and my back thank Fit very much!!! 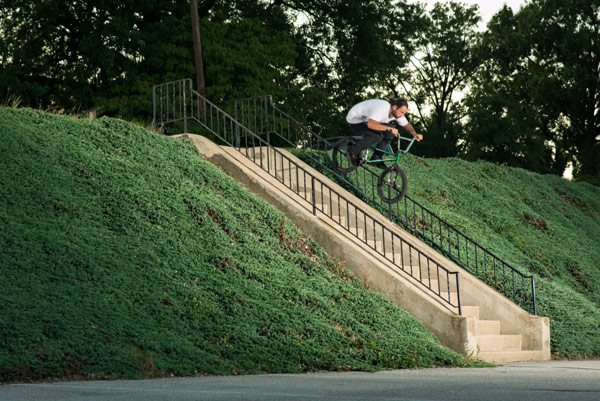 Does your setup change much as far as the number of pegs, bar angle, seat height, freecoaster / cassette or are you pretty consistent with those things as well?
I ran plastic pegs for a long time, but I felt that I was waxing more steel rails in the streets than I should be. So, I went back to metal pegs and only use the plastic pegs with the set-up calls for it. I have been running three pegs for years, I would run four but my big ass feet ain’t having it! I run more seat post than the normal because I like to be able to sit down and pedal, hahah. I have been running a coaster for years now.

What would you say your favorite part of the bike is?
My frame and bar are definitely my favorite parts. I still trip out that I have a signature line! Thanks to anyone out there running any of the SAVAGE parts!

How often do you build up a new bike? Do you try and replace things before they break, or do you run it till it is dead before you get new parts?
I am pretty hard on parts, so I switch stuff out as needed, but I do like to freshen up the frame every six months or so.

Does She (or he) have a name?
SAVAGE

You’re running your signature Savage frame and bars. Have you made any changes to the design since the release? Will there be another version coming along soon?
Nah, no changes. I don’t need to change anything. People seemed stoked, I have gotten some positive feed back which gets me hyped! Thanks!

The new Mint color just came out. Will there be any other new color options coming that you can tell us about?
Yeah, the mint is new new! I’m stoked on it. I’ve been into more of the black or raw frames, but I have been running colors recently and I’m liking it. They look cool in footage! As far as new colors coming, you’re gonna have to wait and see, haha!

How are things going with Fit? Do you have any trips or new videos in the works to wrap up the summer at all?
Things at Fit are good, they just re-upped on some new dudes on the pro team. So it’s only good things to come! I have been filming a bunch with my dudes, maybe for some kind of edit not so sure yet. I am working on a complete edit with one of my new 2016 bikes. I have a box and rail set up around the back of my house, so I’m gonna do a little project with my dude Ryan Landman. Also, I would like to make it out to Cali this winter (to make up for last winter being on the injured list), so hopefully I can get some stuff done with the guys over there! 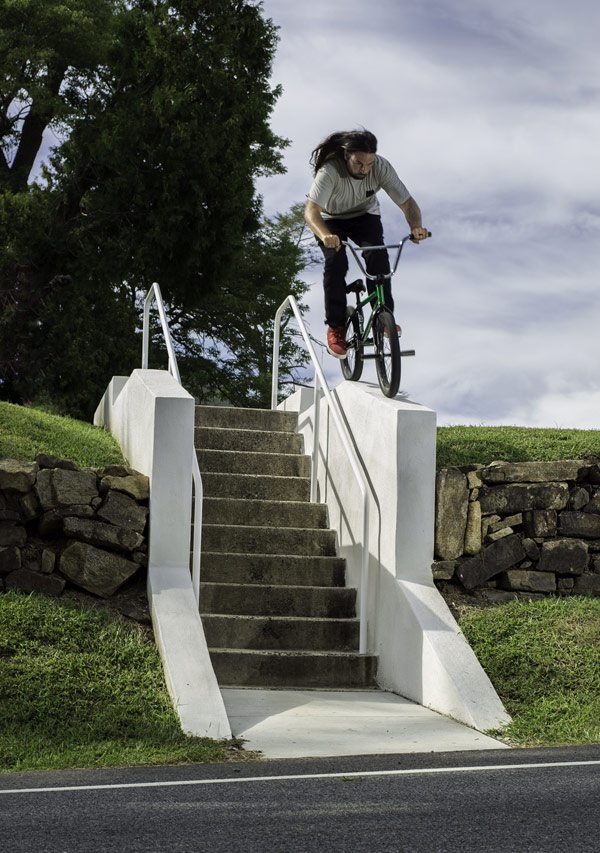 How are things going with The Daily Grind? Do you have anything in the works with Gremlin and the rest of the crew you can tell us about? Trips, videos, signature parts or anything like that?
Things at DG are cool, too. The “Hard Times” DVD just got released online. So, go check it out if you haven’t seen it. DG also just dropped some new goods. Check out the site and get some quality bike parts! Some of the Stink Pit boys and I will be headed out to Ohio in October, so it’s gonna be good to be with the crew to film for some new promos and web stuff! Signature parts!? haha . What do you say, Grem?! haha Just kidding. All the DG parts are a team decision, which is rad. Keeps things simple and quality. Cheers to my dudes over at DG!!!

Anything new with the Stink Pit crew you can tell us about?
We got some plans with Stink Pit. Like i said we are gonna make a trip to Ohio. Hopefully we can all get off from work and get in a van to mob. We want to do new threads so be on the look out for some kind of new shirt. We plan on doing more web stuff, so hopefully we can get shit going. The guys have been going in on the usual Sunday session, so we are off to a good start.

How is your shoulder doing? I know last time we talked you were just getting ready to start riding again.
The shoulder is good to go. I did the full amount of rehab and I did a bunch of stuff on my own as well. I have been riding a bunch and crashing a bunch, haha, so I would say I’m back to normal. I have been motivated and really want to get shit done for my sponsors. It feels good to be chopping away at some video projects and shooting pics again.

What else is new? Anything outside of riding got you excited these days?
Yea! Me and the babe just got a dog! Her name is Kona and she is a 8 month old pit bull mixed with corgi. She kicks ass, she goes a bit crazy when I ride near her but I’m sure that will change in time. hahaha 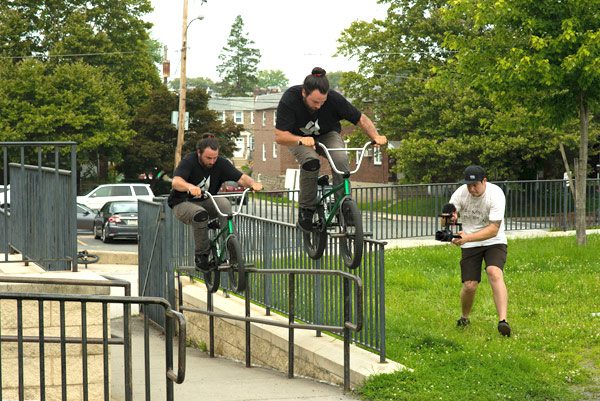 How can people keep up with you?
Follow me on insta @danconway. Follow @fitbikeco and follow all the SAVAGE products for chances to win free shit. I’m into the insta contest and give aways, so be on the look out for more of those! Follow @stinkpit and follow @dailygrindbmx

Do you have any shout outs or thanks?
HUGE THANKS to Chris and all the dudes at FIT for keeping me and the Stink Pit crew rolling! Thanks to all my boys at STINK PIT for pushing each other to keep filming, shooting, and riding together even if its only one day a week. Thanks to Grem at DG for sending and re- sending packages to me so my bike is dialed all the time. Thanks to all my family and my girl Kim for all the support over the past year. Thanks to BMX UNION for doing this interview, means a lot! Thanks to everyone that is about FIT, DG, or SP. hope to see you in the streets some time, Cheers!