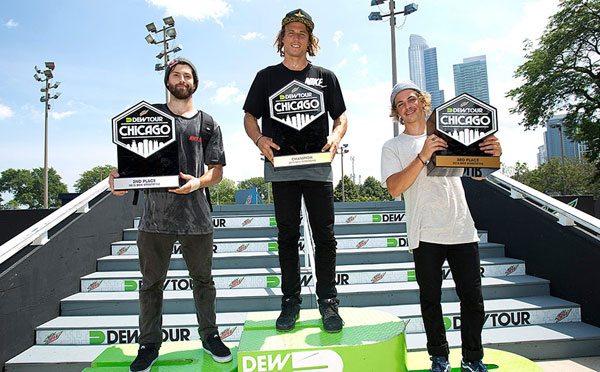 It looks like Dennis Enarson took home the top spot at Dew Tour Chicago’s Street Style contest with Garrett Reynolds and Tyler Fernengel rounding out the top 3! Check out the full results below!

Enarson Tops Streetstyle Podium Following A Second Place Finish In Saturday’s Street Final
Chicago, Ill. – June 21, 2015 – The 2015 Dew Tour action continued Sunday with the top BMX athletes competing at the Dew Tour Chicago Streetstyle course. After a second place finish on Saturday in BMX Street Best Session, California-native Dennis Enarson continued his impressive performance in Chicago by taking the top spot in the BMX Streetstyle Final. The packed crowd was electric as Enarson rode away with the title.
Enarson didn’t waste any time Sunday, turning in a 90.50 on his first run, holding the only score in the 90’s for a majority of the contest. The last rider to take the course, Enarson’s score was enough to hold off Garrett Reynolds’ 88.92 for second place and Tyler Fernengel’s 88.25, and continued to give the fans a show with his victory lap. This is Enarson’s second time atop the Dew Tour Streetstyle podium, winning in 2014 in Portland.
The Dew Tour is the only action sports competition to hold a BMX Streetstyle event, and Enarson took full advantage of the custom-built course. In his winning run, he put down an impressive line consisting of a foot plant three into the eurogap, transitioning to a no footed seat grab bar over the box jump, foot jammed up onto the wedge landing, 270 to another quarter, opposite hanger across the trash can, tire ride to opposite whip, 270 to smith on the quarter, rolling back in, and ending his run with step up to hanger, curve wall to tail whip, and a huge opposite whip over the down rail.
“Dew Tour and Chicago have always been rad,” said Enarson. “I’ve been coming for eight years, and the Dew Tour always treats their athletes really well. The vibe is so chill.” When asked about streetstyle, Enarson said, “Streetstyle is always one of my favorite events. You get to rip the whole way down, so I love it.”

Full results and videos after the jump!