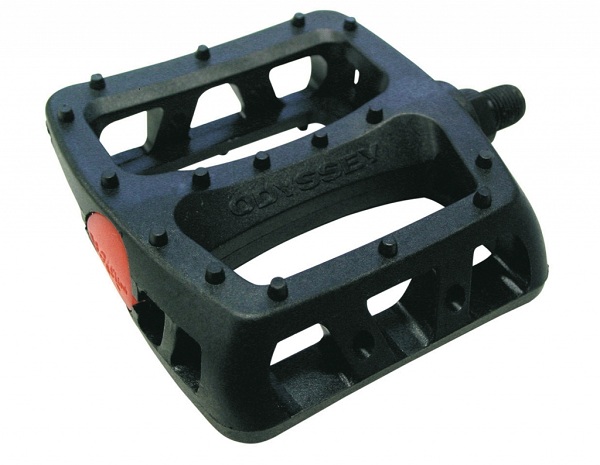 Most of us take for granted the amount of time and effort it takes to design a good bike part, especially the ones which have been gracing bikes all around the world for many years now. Over the course of the next few months I’m going to be doing a series of interviews with the people who are responsible for creating and designing some of the most iconic and inovative products in BMX.

It’s not that often that a relatively basic product that’s almost 10 years old suddenly explodes overnight and goes on to be sold in the millions. The chance of going to your local skatepark nowadays and not seeing a pair of Odyssey Twisted PC Pedals on a bike is very rare. From entry level completes, to the bikes of many pro-riders, the Twisted PC is regarded as THE plastic pedal. I caught up with Odyssey’s Product Design Manager Chris Cotsonas to find out more about the humble origins of one of  the best selling products in BMX and how it’s changed since it’s birth fifteen years ago.

The Twisted PC has been around for a good while, can you explain a bit of the history behind it?
The Twisted pedals were already finished and in stores when I started working at Odyssey in 1998. The original metal pedal had some problems with the body structure and they got moved to a new factory pretty quickly. After some revisions were made to the metal body they decided that a “PC” (plastic composite) version was needed and Odyssey eventually started offering them in 1/2″ and 9/16”. The idea was that the 1/2″ would be for use on low-end bikes and that flatland riders would use the 9/16” version. The PC’s popularity was pretty quiet for a long time. There were some dedicated users when they came out, but not many. The PC was first offered for sale in 1997.

How did you come up with the name?
I actually had nothing to do with it. The staff at that time was different than it is today. The “Twisted” name was just descriptive. The platform of the pedal body was designed to follow the shape of the shoe in the area where contact is typically made with the foot when pedalling. The body starts off wide at the front and it narrows as it moves toward the back. This unique shape then gets flipped 180 degrees to make the other side of the pedal, and the form that the body takes as it connects the two contact surfaces together ends up giving the pedal a “twisted” look that was unusual when they were released. A few companies have adopted similar design cues in more recent years.

The pedal has become synonymous as the most popular plastic pedal in BMX, why do you think this is?
It’s hard to say for sure. Some of it is just serendipity and coincidence. In the mid 2000’s the Tree guys in St. Louis and some of the riders in New York City, Portland and Seattle began looking for lightweight and affordable pedals for street riding. The Twisted PC was readily available, cheap and it had a good body shape. By 2007 the interest in the 9/16” Twisted PC was clearly going way up. 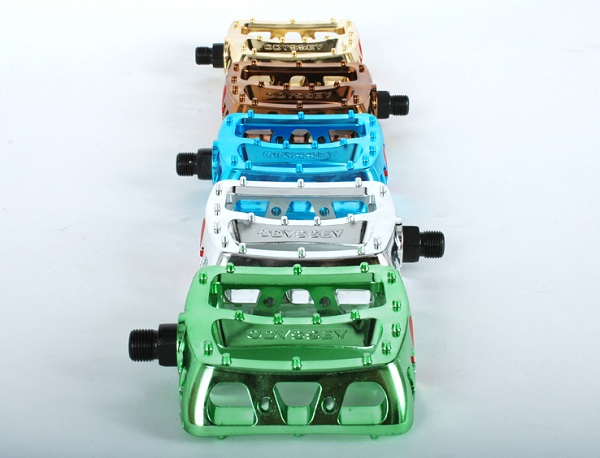 What was your initial reaction to the sudden boom of Plastic pedals in BMX? Did you think it would just be a fad, or did you know it would be a product that was here to stay?
I liked the MKS Grafight-X pedals when I was growing up, and we always thought that there was a need for a good plastic pedal at Odyssey, but it was hard to know for sure if the interest in modern plastic pedals was going to last for street riders. We had been working on the JCPC pedal before the Twisted PC ever really took off though, so we had wanted a plastic pedal for ourselves, and we were confident that other riders would want them too. All of the interest in the Twisted PC reinforced that the need was there, and that it would probably be there for a long time.

How many Twisted PC’s do you guys produce a year? How many do you think have been sold to date?
As of 2007, we’ve been selling around 75,000 pairs each year in 9/16”. In total, we’ve sold around half a million Twisted PC’s since 1997. For the first ten years the sales were just a blip, especially when compared to our metal pedals.

It’s been nearly 20 years since it was first released, What changes has the pedal been through in that time? Have there been many alterations to the design?
The Twisted PC itself has hardly changed since its introduction. The biggest difference was switching the 9/16” spindle to the same material and treatment spec that we used in the original looseball JC pedal, which was then carried over into the Trailmix. The strength of these spindles is a big improvement, and they are cheap to produce, and since the PC was now mostly being used for street they needed to be updated. This happened around 2007 or so. The PC’s body material can also change depending on the colour and finish. This is the reason that the grip and grinding properties can feel different for a given color to some riders, and the impact strength of the body can vary a little bit as well.

Odyssey have produced the pedal in just about every colour under the sun, what has been your personal favourite?
For the Twisted PC, that’s a difficult one. Plastic allows for a lot of unique ideas, and it has been fun for all of us to try to think of new ones. For example, the color-change “chameleon” material was tough to pull off in production so it was cool to see it when it finally worked. I guess that I’d have to say that I liked the original translucent pedals. We worked for a year or so to find the right grade of plastic, and more importantly, to find the right grease that wouldn’t damage the plastic over the long term. We tend to take things like the translucent pedals for granted now but there was a point where there were some difficult hurdles to work around to get them right. I also liked that we switched the end cap color to white and indirectly tied them to the original iMac. We could all relate to the idea of a company recreating itself, even if the design that we used to express this was a carryover. 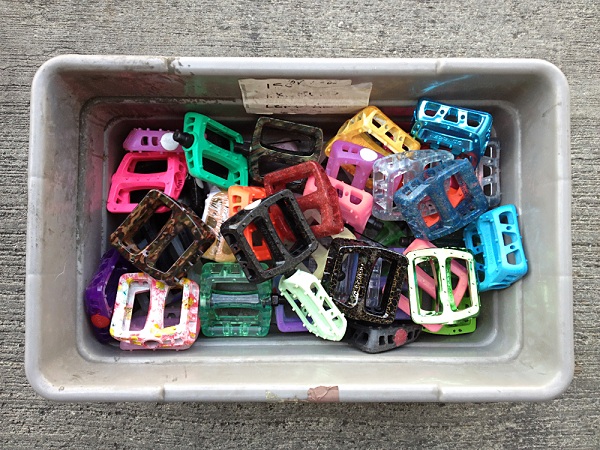 Any weird stories or uses of the pedals that might be interesting to add?
I think I’ve seen them used on nearly every type of bike. In Austin I saw them on a unicycle also. Nobody would have guessed that would happen when I started working for Odyssey and we had lots black PC’s sitting in the warehouse. We had to make a new tool for the body recently and a dedicated reflector bracket since they are spec’d on lots of complete bikes. Having a second body tool was advantageous when we were trying things like the chameleon material. We made the samples for that finish on our own (away from the production facility) so we could prove it and get it into production before the material was discovered and offered to other brands. It’s always cool for us to see the pedals in strange places. They have shown up in lots of commercials, posters, and advertisements that aren’t even tied to BMX. The shape of the body is so easy to spot.

You guys have made some of the most successful pedals in BMX, do you have any others in the pipeline?
We’re always working on new things that are pedal related. We have some projects that we’re doing with our team riders, and the JCPC patent in the United States has been issued. As a result of this, we’re going to be working with Wellgo to license out the “sandwich” aspects of the design – meaning that if another company wants to do something similar to the JCPC that they can easily produce their own design through Wellgo now since the licensing will be available. 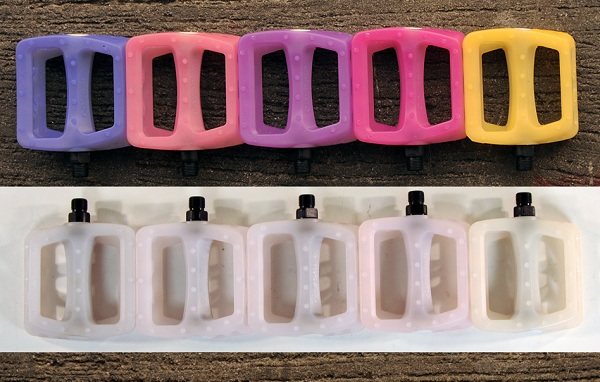 To find out more about the Twisted PC Pedal and the latest colours it’s available in, head over to Odyssey’s website OdysseyBMX.com. Check it out!