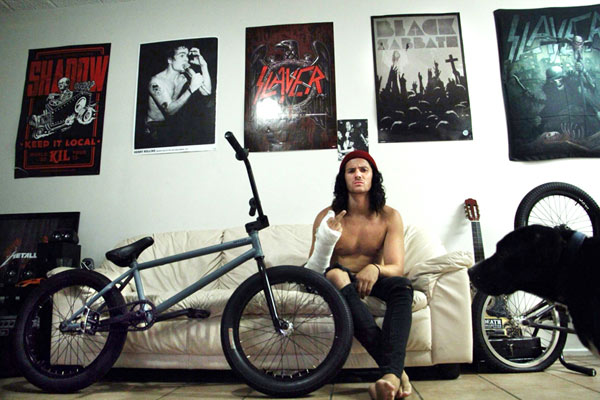 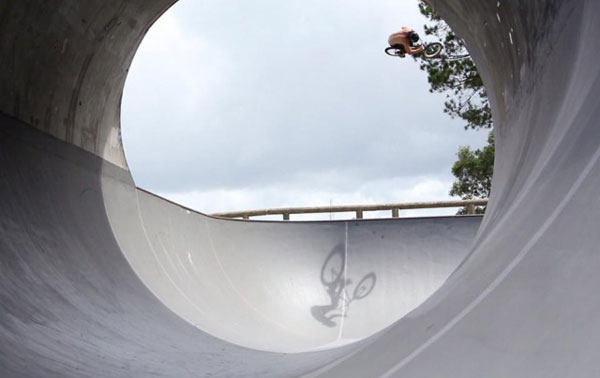 Years riding: Riding for about 16 or so years.

What was it that first got you into BMX?
My parents got me a second hand bike. It was a Bully Bikes 16 inch. I started riding and have never stopped!

Dylan! How’s it going? Is your wrist healing up pretty good?
I am going awesome! My wrist is healing up nicely! It’s getting better every day.

What exactly did you do to your wrist? I’d imagine you came in pretty hot on a massive air?
I broke my scafoid. I had surgery and had a screw put in. I actually broke it in the first clip in my latest edit, haha. I came off the back on a 360 to fakie. I was not a big crash at all, just landed funny on it.

How much longer till you should be back to full strength and kicking ass again?
I think mayb 3 weeks to a month!! I go down and carve the Elanora bowl and get more strength every day.

So, more positive news… You recently found yourself a spot on the Mutiny Bikes team down in Australia through Selekt Distribution. How did that opportunity all come about?
I got a really awesome message from Paul from Select Distribution. We talked and he made me an incredible offer with Mutiny! I said hell yeah and decided to give it a shot and see what the future has in store.

It seems like people have really taken notice of your riding since your last edit dropped. How psyched were you on the response of that video?
Man, I’m so stoked! Bloody stoked!

If I had to pick a rider that you remind me of, it would definitely be Tom Dugan with some of those massive airs. Who were some of the biggest influences on your riding growing up?
Haha, there is a lot of people that influenced my riding growing up. Brad Taylor to start! He was the very first person I ever saw at the very first skatepark I rode! ( R.I.P KP park). Nick Richardson, Jerome Misfed, Jamie Casey, Mick Eddie, Benn pigot, Tyson Rayner and all the KP and Woodridge locals really! 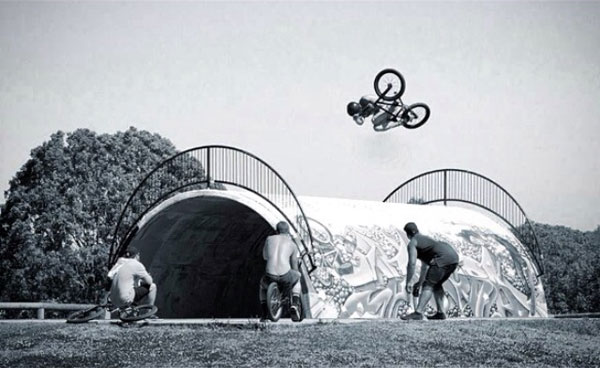 It seems like you split your time up between the trails and skatepark these days. Where are you usually found riding these days?
Elanora bowl, Snakewoods Trails, Pizzy, Beenleigh or random street spots.

If you had to pick a favorite spot you have had the chance to ride in the past, where would that be and why?
I’d say the Fivedock bowl in Sydney. It has big quarters, a lot of lines and I also get the pleasure of watching the locals shred.

Let’s say you got a fat budget to take a trip anywhere in the world to ride one place… Where would you go and why?
I would go straight to Austin, Texas. Hopefully I would be allowed to ride Joe Rich’s T1 Ramp. That’s the dream.

I have a feeling being apart of the Mutiny Bikes team might just help make that dream a reality since they’re based out of Austin, Texas. Do you have any travel plans with them in the works at all yet? Any chance we get to see you stateside this year?
No plans have been made as of yet still early days. Just concentrating on getting 100% on my bike then who knows what the universe has in store for me.

What about more local travel plans. Anything you’re hoping to make happen once that wrist is all healed up?
I am really hoping to get down to the A.C.T jam in Canbera this June. Best time ever!

Do you have any plans of getting to work on a new filming project once you’re 100% again? I know there’s a ton of people that would be psyched to see some fresh footage form you.

For sure! I broke my wrist and didn’t get to film a lot of things I had in mind. I’m keen to get right back at it!

What do you think you would be doing today if you never found BMX? Care to take a guess?
Probably boxing, I think.

What are you usually up to when you aren’t riding these days? I’d imagine you have a few things that keep you busy with this down time to heal up?
Doing a bit of drawing and going to the beach, a lot of BMX movies, chilling at the trails watching the boys kill it and a little too much partying…

Word on the street is that you used to work on a fishing boat slaying massive sharks and sword fish… How did you get into that? Was it something you really enjoyed doing?
Yeah, I was living in Sydney at the time and some things came up and I moved bak to QLD. My dad hooked me up with a job on a longline fishing boat. I hate fishing. There was a crew of five including me, usually out at sea for a few weeks at a time. It was an eye opener, that is for sure!! Cutting and gutting Up to 300 kg Sword fish and 10 foot Mako sharks. Some gnarly cyclones and some long days. It was an experience that made me who I am. 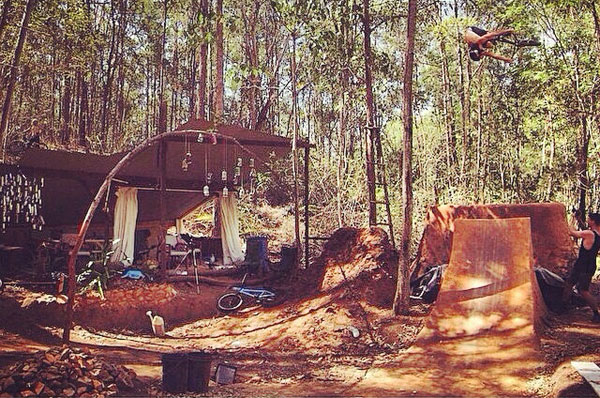 Other than BMX, what do you think you could see yourself doing for a living? Any sort of “dream jobs” you have in mind?
Dream jobs ? At the moment I am a scaffolder and it sucks, haha. My dream job I guess would be not to have one, just ride.

What kind of music are you into? Seems like you like the heavy stuff based off that photo we spotted welcoming you to the Mutiny team.
I like a lot of different music I don’t limit myself to just one genre. Some of the bands I like are ..
Rancid, Transplants, NOFX, Lars Fredrickson, Incendiary, Slayer, Minor Threat, Bad Religion, Harms Way, Stick To Your Guns, Bob Dylan, Terror, White Chapel, Neil Young, Tupac, etc.

Do you go to many shows or anything like that? Who are some of the bands you have had the chance to see live that you were psyched on?
The last show I went and seen was Harms way and a few other Aussie hardcore bands. Time Crisis was sick! Mainly just blast music at home and listen to my house mate play his seven string with a kick arse amp!

BMX and music seem to go hand in hand… Are you the kind of rider that likes to blast music while you ride or are you more of a headphones out guy?
Roll the car up and crank it!

Do you ever find yourself getting burned out on BMX after all these years? What are some of the things you like to do to keep things fresh for yourself?
Never get burnt out on riding! But, if I feel a little stale, I’ll try some different tricks or a new line or even ride somewhere different. I often change my bike around, whether it be a shorter or taller front end, different tires or a new paint job.

What’s something about yourself that might surprise most people?
I had I gyro and did 720’s hah.
I never raced.
I rode bikes from the dump and peoples old parts till I was 13 or 14 or so. I’m half Kiwi.

What’s the last song you heard and movie you watched?
The last movie I watched was an old Props DVD and the last song was Hollow by Pantera.

Let’s say you won the lottery and had a ton of cash to work with. What’s the first thing you buy and why?
First thing I would do is buy a motor home so me and my mates can road trip!

Where do you see yourself in 5 years?
Five years? … I have no idea! On my bike. I know that much.

How can people keep up with you these days?
Instagram – @dylanlewis_bmx

Do you have any shout outs or thanks?
I wanna give a shout to Jettman for helping me change my life for the better! All my crew! Mulesy – Thanks for standing by me and putting up with me, Tama for being a sick brother, Brad, Tom, Timmy and James for being the sikest mates! Liam Anderson (lemon), that dude helped me a lot! Cheers to my mum, dad and family. Shout out to Snakewoods trails! Dale, Joko, Falk, Jacko – thanks for the good times and plenty to come! Shout out to Cosmic-Rumble™ Thanks to Paul Robinson from selektditrobution and of course Mutiny for giving a ratbag like me a go!

Anything else you want to say?
Thanks for reading.