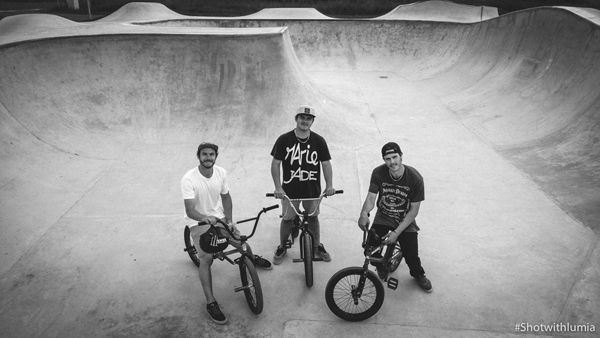 There’s no denying that by now you are familiar with Hadrien Picard’s work. We’ve seen A LOT of amazing videos out of him including his most recent release, Concrete Brothers, featuring Kevin Kalkoff along with his half-brothers Enzo and Thomas Benedetti! Concrete Brothers was part of the Nokia Pureviews series that Hadrien has been working on where he films using their Lumia cellphone that produces some pretty amazing quality.
We were really stoked on the new video and figured it would be cool to catch up with Hadrien to find out more about the video, the Pureviews series and what else he has been getting into as of late! Check out what he had to say along with some dialed photos! We also have a special PHOTOGALLERY for you to check out with more photos, after you check out the interview! Let’s see what he had to say! 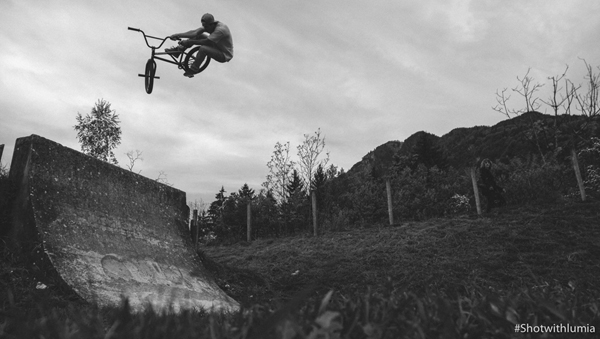 Hadrien! How are things going for you? It’s been a while since we’ve caught up!
I’m doing well! It has been very busy!

I’d imagine! You have been staying plenty busy with different film projects, right? Any hints on what you’re currently working on?
I try to keep myself busy indeed. It stresses me when I am not, haha. I have been doing some stuff outside of BMX lately. However, BMX related, I’m really happy about the new issue of Soul, I’m almost proud of it! Also while I write this, I’m working with the Sosh Urban Motion here in France. We have had quite a bit of rain, but just having so much talent from BMX here & filming in one place makes me really happy! Other than that, I am filming a lot for Nokia Pureviews & there will be plenty more awesome stuff coming this year!

So your latest Nokia video, Concrete Brothers, dropped the other day featuring Kevin Kalkoff and the Benedetti brothers. When did you initially start working on this project?
We talked about doing the project last year with Kevin but it didn’t happen until this year. It was a good occasion!

How did you go about choosing these guys for this video? Was it something you wanted to do for a while or did it just kind of happen?
I have always been impressed by a single person who is talented for something, but I’m truly amazed when it’s something that runs in a whole family. I always wished I had a brother to ride with myself. Kevin rules and so does his half brothers, so I wanted to show that to the whole world!

I don’t think a lot of people realized that Kevin, Thomas and Enzo are all brothers and they all shred. Do you think it’s something in the family genetics or did Thomas and Enzo just have a really good example to learn from?
I think it’s a little of both indeed. They have the talent in their blood for sure, but at the same time you can see there is a strong emulation between them; they are always helping each other, giving advice, motivating each other and sometimes making fun of each other when one of them struggles to put something together! It’s also very funny to see that they all have their own style; Thomas is a French Dennis Enarson, Enzo is a really new school street rider and Kevin is… Kevin! 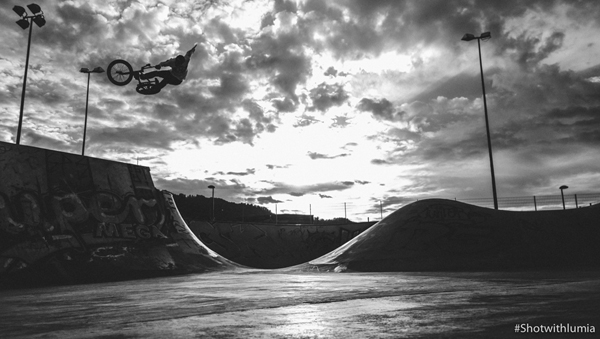 See all of the photos in the PHOTOGALLERY

So this video was the next video in your Nokia Pureviews series. What’s the concept behind all of these videos? You’re filming on their phones for the entire project, right?
Yeah, honestly Nokia is a one of the best companies to work with, and not for. They listen a lot to what you say and are totally confident about what people from the sports they work with think.  I have close to a total freedom for the videos and it’s great! Shout out to Nicolas & Estelle!
The main goal for Nokia Pureviews is to show the video and photo capabilities of the Lumia phones with great stories and videos. I guess from what you can see, the quality is actually really great!

I’d imagine it’s a bit of a challenge for yourself to film with a phone versus the professional gear you’re used to filming with. What are some of the good things about filming with the phone and what are some of the downfalls?
Downfalls are you can not control as much of the image as you can on a regular camera.  On the positive side, it’s really small & you can bring it anywhere really easily.  The quality is also amazing for such a small thing and the optical stabilisation is awesome. I filmed a lot of lines with the Lumia on the Steady cam and you can see that the filming is really smooth… Even better than what I do with a regular camera on a steady sometimes — I’m not good at that anyway, haha.

Back to the Concrete brothers video, where all did you film for this one? Was there anywhere you really wanted to get to but couldn’t make happen?
We filmed around Annecy, but I really wanted to show some unseen bowls rather than just go to Geneve and Annecy. I honestly was really happy with how the filming came together with the spots.

Were there any crazy moments that happened while filming for this or was it smooth sailing?
Smooth sailing all the way. Some of the bowls are in Switzerland which is a peaceful and quiet country. Filming in bowls are way easier than filming on the streets where you are not supposed to be there. The worst thing about being in bowls like that are scooters… they are fucking everywhere! Plus, most of the time, they are small kids on the scooters who don’t understand what to do and don’t pay attention to what is happening in a skatepark and that could be dangerous. The parents are irresponsible thinking it’s a kindergarden, I guess. You wouldn’t bring your kid to a football stadium where some 20 year old guys play… It’s the same in a skatepark. I mean, you just don’t mix a 4 year girl on a scooter with a 25 year old guy riding full speed on a BMX bike! 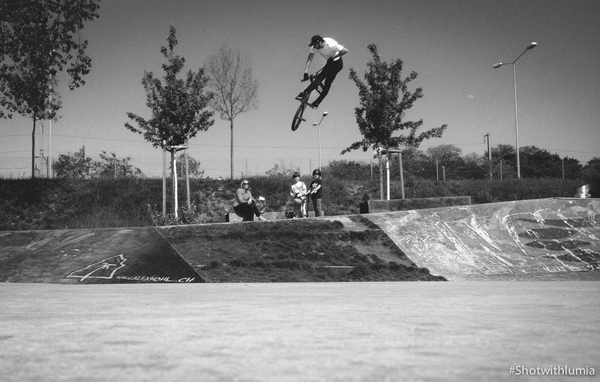 Flying high above the scooters.

Which clip in the video took the longest to get? Any reason why?
Kevin’s over tooth manual 180. The rail was really close to the back wheel when you do the 180 so it took something like 100 tries for Kevin to pull it. That was well worth it!

Wow… 100 tries!? That’s crazy. If you had to pick a favorite clip from the whole video… Which would you pick and why?
Hmmm… Maybe the line of Kevin in the really steep DIY bowl in Lyon. It may be hard to see, but this bowl is really hard to ride! The transitions are small and really steep. Kevin made a really good line out of it. The story of the bowl is also really cool. The city council just gave them the land and the locals did it all by their selves. It only cost something like 20,000 euros compared to about 10 times that if it would have been built by a regular company.

I know you always have a ton of real good footage that just doesn’t quite make the cut. Can we expect a B-Roll edit any time soon?
Mayyyyyyyybe! Haha. 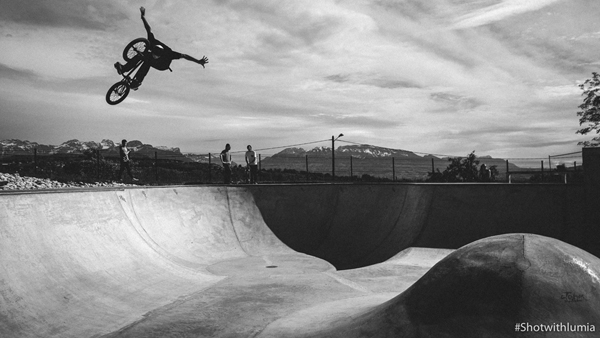 See all of the photos in the PHOTOGALLERY!

Do you have any other film projects outside of the Nokia stuff going on we can look forward to seeing?
I have one thing for Red Bull with Matthias Dandois that we are working on, but it takes a lot of time.

Outside of that, what’s new? Have you been getting much time to ride or pick up on some new hobbies?
I am working more now than I have ever worked in my whole life. That is a new one for me. I don’t want to be like that all my life, haha!

Do you have any shout outs or thanks?
Thanks to everyone that helps me out! The riders, companies… and you for this interview!

Anything else you want to say?
Being polite is an important mark of respect.

Check out the full PHOTOGALLERY here!