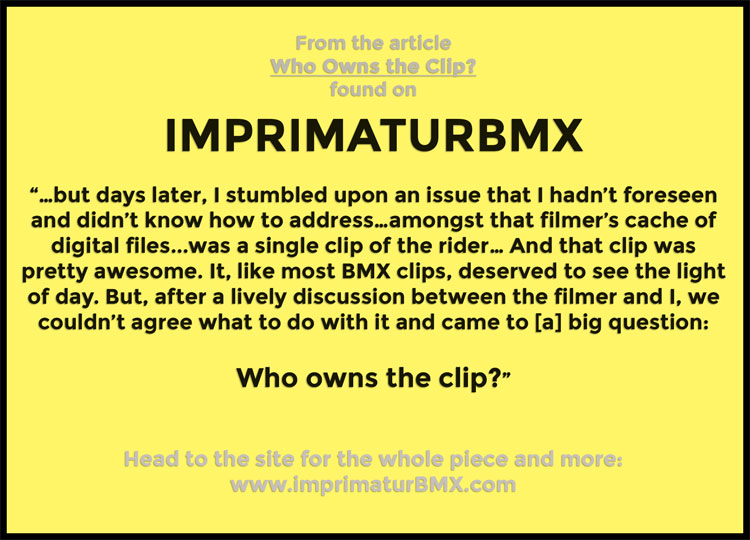 Anyone who has rode BMX for a little while has likely either had a video clip or photo of them taken while riding, or maybe even been the person filming or taking a photo of a rider doing a trick. When you’re doing it for fun, that’s pretty much it. Maybe you post the clip or photo on Instagram or it ends up on Youtube in an edit, but there really isn’t much beyond that. However, when it comes to the business side of those same exact transactions, it becomes a little more complicated. People are likely doing it for work, getting paid for their time and actions and that photo or video clip very likely may be that reason for all of that happening. The question of who owns the clip or photo at the end of the day can be a pretty complicated question to answer and quite honestly it’s not something 95% of people reading this will ever have to deal with.

However, it never hurts to have a little legal knowledge in the arsenal just incase something does come up. Imprimatur BMX has a new piece that Mike Hinkens put together taking an in-depth look at just who owns that clip or photo at the end of the day, and it might actually be a bit of a surprise to some of you as to what the answer is. If you are curious, you can check it all out over on the Imprimatur BMX website now.

You are here: Home / BMX Videos, Products, News and More / Imprimatur BMX – Who Owns The Clip?