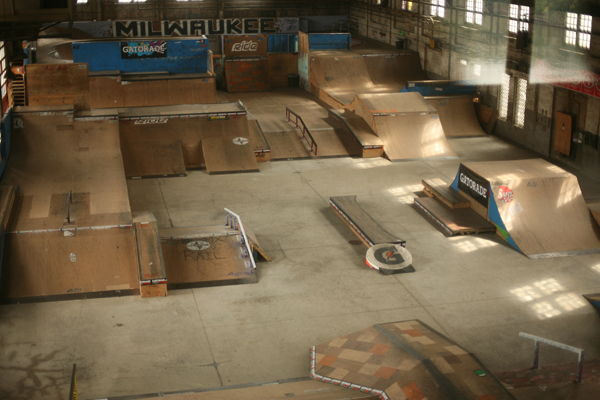 Milwaukee 4 Seasons has been a staple in the Midwest BMX scene for the last 11 or so years. When did you decide to start the park, and why Milwaukee?
In 1998 I was living in MTL Canada and had just left a company that I had co-owned. I had a good friend at the time that owned a skate shop in MKE and he was trying to convince me to open a skate park because there was nothing here at the time. He felt there was such a high demand; so that’s what I decided to do!

4Seasons had a second location in Madison for many years as well. What made you guys want to close down that park and focus solely on Milwaukee?
Well Madison was just a lack of business. After 9 years of being open, I was super bummed to have to close it.

The Milwaukee location has seen plenty of changes in the park over the years. Who were some of the original guys involved with the design of the park? Did you ever plan to have it so BMX oriented with the box rhythms and everything?
Mark Zitzer, Tim Kulas and myself plus a few others were the originals. When I opened I was just planning on building skateboard obstacles because that is what I was familiar with at the time, but when I got some more feedback about the scene we added some BMX stuff as well. I was totally open to it because I had always rode with BMX riders growing up.

Now days, Jeff Klugiewicz has been doing quite a bit of ramp building at the park. How long has he been allowed to run the saw and drill, and how do you keep him motivated with changing things up?
Well Jeff K and I build everything together at the park. We work awesome together and he has such great ideas on what to build for Skateboarders and BMXers. We get a lot of ideas from our team guys and even locals that shred the park. It’s easy to keep him motivated because he knows he will get to shred anything new that we build!

I know there are people who say 4Seasons is ran by a bunch of “anti-BMX skaters”, but I’ve never got that vibe. You guys have Jeff building ramps, and pretty much every time I’ve been to the park over the last two years Dirty Dan Bogard has been manning the register. Care to clear the air on any anti-BMX talk?
That is a shock to me. I would say to those people to come here and ride. I think their minds would be changed. We have always supported BMX since day one and there has not been a day in the 11 years that a bike rider has not been allowed through our doors. I think that says enough!!

The park has been home to a lot of different events for BMX from letting the BACO crew take over (which can usually be pretty risky), to the Free Flow Tour, and now the Midwest BMX nights on Thursdays. Do you guys have any plans for doing some more contests any time soon? Why didn’t BACO happen this year?
Baco is still in the works. Dave is a busy dude and hopefully we can get a date set soon. We have a contest coming up in May or June that we are doing with Harley Davidson and MidwestBMX.

Last year, I was invited out to your Battle at the Bubbler demo/contest that went down during Verge Music Festi-val in Milwaukee. Do you guys plan on doing that again this summer?
We are still waiting on the date, but we hope so.

The second Ray’s recently opened its doors in Milwaukee and it seems like there has been a bit of tension between the crews choosing one park over the other. Has the new park been hurting you guys, or has it been getting more skaters to come to the park with less BMX guys flying around?
Yeah, it hurts when any new park opens close to you. I personally have no problem with Rays, I think riders should ride everything. I think we have a very strong scene and hope to continue to support it and they support us!!

You guys have a team, right? Who’s all on that these days?
Jeff K, Brian Kachinsky, Mike Hinkens, Lil Jon, Tony Malouf, Timmy Theus, Jeff Dowhen, Mykel Larrin and Grant Castelluzzo. Plus a bunch of rippers on the B team.

The park has seen a lot of big name guys in BMX and skateboarding pass through the doors. Who are some of the more notable BMX guys you have been psyched to have visit the park? Didn’t Tony Hawk and the Birdhouse guys cruise through recently as well?
There has been to many to list on both sides but here are a few Aaron Ross, Morgan Wade, Ryan Nyquist, Jay Marion, Ruben Alcatara, Taj, Tony Hamlin, Hoang Tran, Chad Kagy, Mad Dog, Drew Bezanson, Rooftop, Edwin D, Sergio Layos to name just a few. Skate: Tony Hawk, Eric Koston, Jamie Thomas, Chris Cole, Greg Lutzka, Ryan Sheckler, Chaz Ortiz, Andy Mac, Mike Carroll, Mike V, Duane Peters, P Rod, Chris Haslam and Daewon Song just to scratch the surface.

Where would you like to see the park in 5 years, and why should people come to 4Seasons to ride?
I would like to see the scene keep growing and the park be able to grow with it. I hope riders will continue to travel to the park. When they are inside our four walls, we hope they feel like the vibe is great, that they have been coming to the park for years and that they love the set up.

What’s your hours and prices? What about the address and website?
We are open 7 days a week and allow BMX everyday. Prices are $11 non-member & $6 members. Check our website @ www.4seasonssk8park.com for all other info about the park!!

Is there anything I missed you want to add?
Owning and operating the park has been such a great experience for me. I’ve seen some really great talent and meet tons of awesome people. Most of all, I love being able to provide a place for riders to come shred!