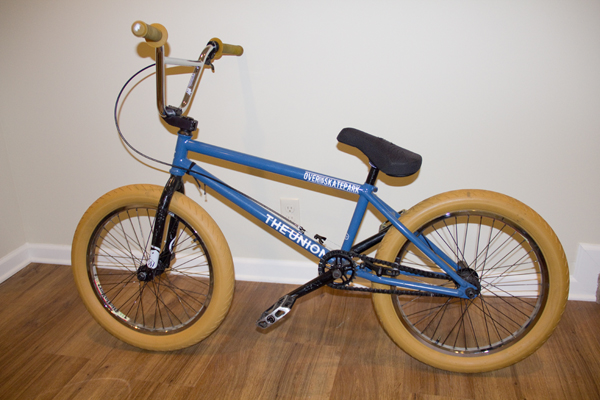 This past winter we got an email from Chris Moeller over at Fit Bike Co. wondering if we would be interested in checking out something they were cooking on that would be out this spring. As always, we were more than interested to take a peek into just what they were working on. Shortly after, he hit us back with some photos of their new T/A tire and asked if we would be interested in giving a sample they had in their possession a go. There was no way we could pass up the offer, so we had them on the next shipment out their door to check out in person!
After giving these guys a go for a while and the tires finally being released worldwide here in the next few days, we figured it would be good time to give you guys a look just incase you’re looking to get some fresh rubber on your bike for the warmer weather hitting the northern hemisphere. Let’s take a look! 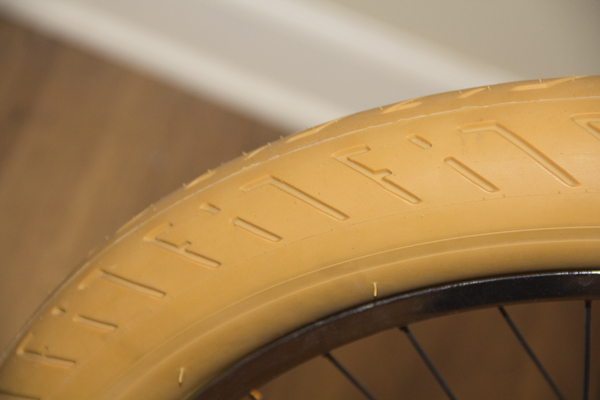 There has always been a focus on tire innovation in BMX, but it seems like lately with the different colors and the bigger tire options gaining popularity, brands have been cooking up some really good options. The gum rubber started really picking up interest towards the end of the year and for obvious reason… It looks good and the rubber compound is softer which helps out with traction. Fit have combined the gum with the larger tire option to create their new street / park tire known as the T/A tire. 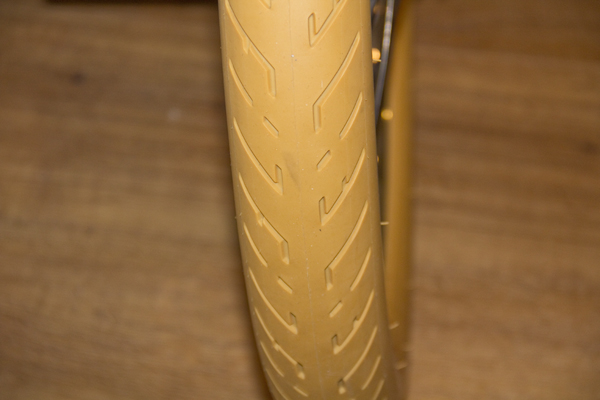 Taking a closer look at the tire, it’s pretty clear that this was designed for the street guys out there with the smooth 2.5mm thick tread pattern in the middle to help reduce rolling resistance and the “FIT” lettering pattern on the sides for a little extra grip when turning. The sides are also 2.5mm thick and is smooth which helps keep the tires from sticking on rails and ledges. The added size also helps with traction and gives you a little more cushion when you’re coming in hot off a big drop. 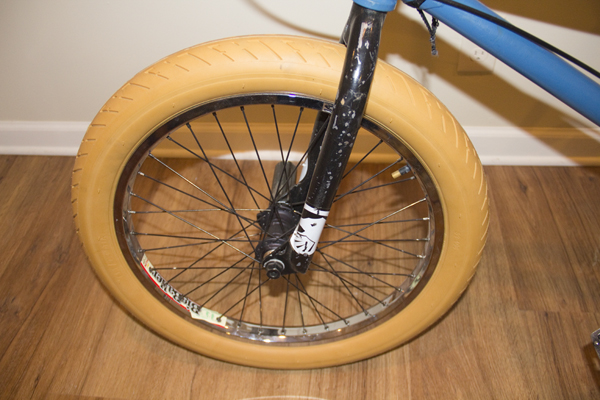 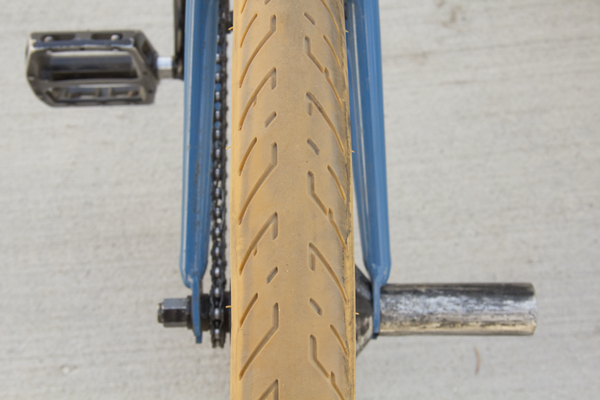 Going into the “testing” of these tires, thanks to the polar vortex and Minnesota being blanketed in snow, the options were pretty limited unless I some how thought riding in -20 degree weather would be worth while. So I spent a fair amount of time on these riding my local indoor skatepark. Going into the first session, I was at first almost a little hesitant because let’s be real… my bike looked damn good! But, I got over it and decided I had to let these tires get dirty. 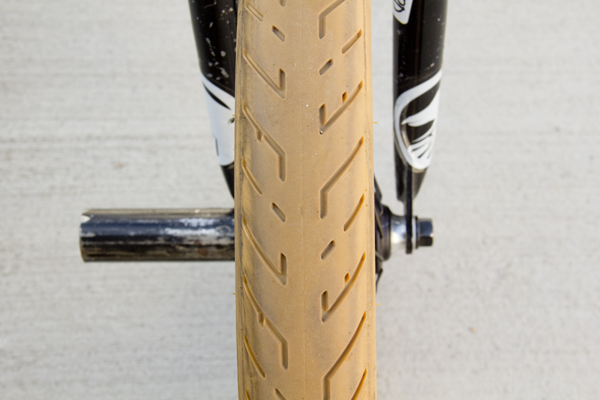 Dropping in for the first time, I think my mind was just convinced that the gum was going to be super grippy and I would have no real issues sticking to the some what slippery floor and dusty decks. I was wrong… I spent the first half hour or so sliding around and pretty much convincing myself these tires were either too hard or the gum rubber was just not what it was hyped up to be.
I know, I know… I’m a dumbass. The tires had a light waxy coating that needed to be worn off before I’d really start feeling the grip I expected. Sure enough, after cruising around for a bit and a couple intentional skids later I wasn’t sliding around and even getting that squeaky noise from the tire grabbing the cement floor. 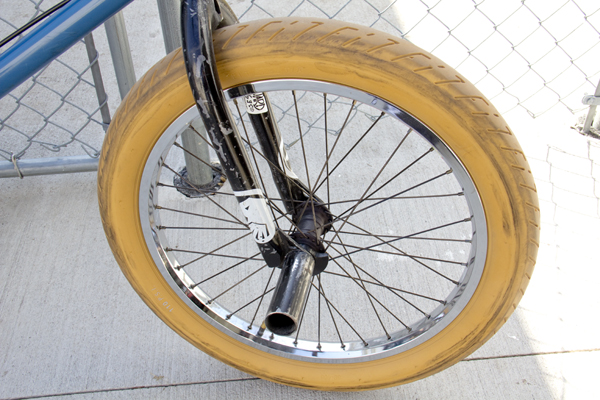 After that initial session on the tires, I haven’t had any fear of sliding out or anything like that. They were grabbing great and I really liked rolling on smooth tires again (I was previously running the Animal MTT Tires which are pretty knobby). I typically run my tires around 85 / 90 PSI as well which is a perk since that’s kind of my preference zone I’ve developed over the years, where as my previous tires had a max PSI of 65. 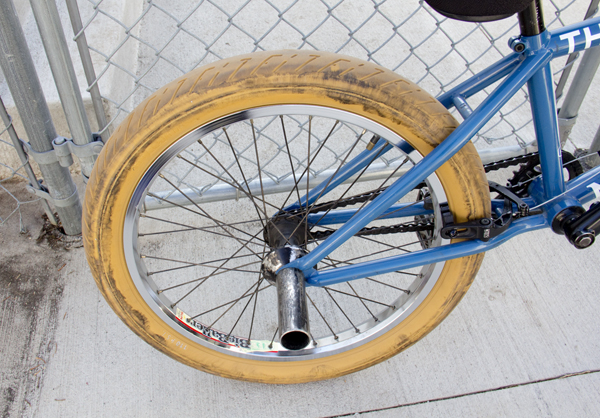 After a handful of indoor sessions on these tires, the weather started turning around and I’ve had the chance to cruise around outside which has been real good. As you can imagine, the T/A tires hold good to smooth cement, so riding an outdoor cement park or street where the cement tends to be a little more rough there is plenty of traction. I also have the metal “Skatewave” ramps at my outdoor park to ride as well which are pretty notorious for being slick, but I haven’t had any real issues. 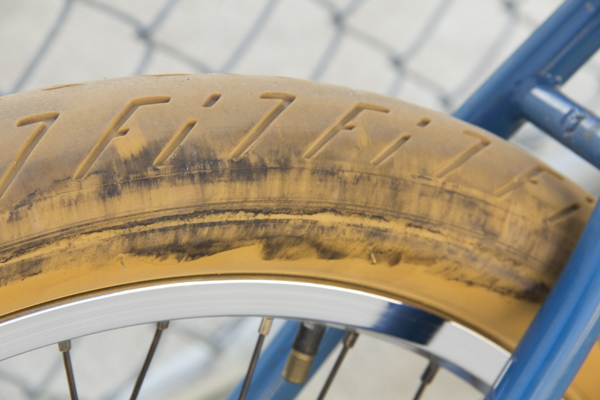 Overall, I don’t really have any complaints about the T/A tire from Fit. I like the simple design and I didn’t actually get a single flat since I put the tires on (then again I’m not beating the shit out of them like some of you could I’m sure). I really didn’t have any issues adjusting to the 2.40″ tire size either. The largest I had ran prior to this was 2.20″. The only real downer I really can think of is that the tires scuff up from wax, grinding and the wear and tear which was expected.

The tires will be retailing for $26.99 each, so have your local shop get ahold of your country’s The Building Distribution to get yourself a set pre-ordered now or you can wait for your favorite shop or mail-order to get the tires in stock!

UPDATE: The tires are OUT NOW, so hit up The Building or get some on Dan’s Comp now!

You can find out more about Fit Bike Co. and their products by visiting their website — FitBikeCo.com