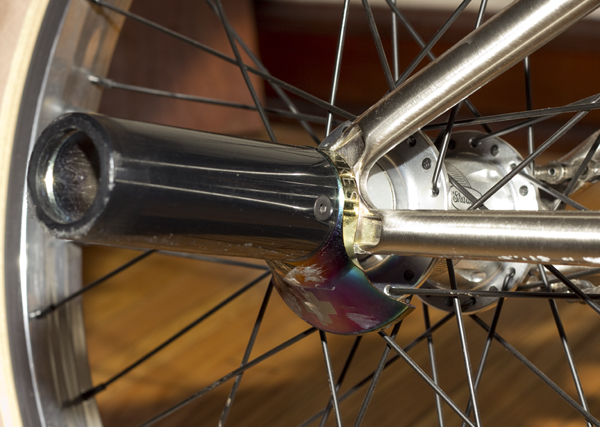 Some of you guys may have spotted this one on the Shadow Conspiracy Raptor Freecoaster Review we dropped a little while back and have been wondering more about just what it is. That unique “thing” spotted in that review is the Mutant Bikes Peguard that we got our hands on back in September at Interbike. This hybrid hub guard and peg combo is something we’ve been seeing pop up here and there for a few years now, but it looks like Nuno at Mutant is pretty close to finally releasing it. After running it for a while now, we decided it would be a good time to give you guys a closer look. Let’s do this! 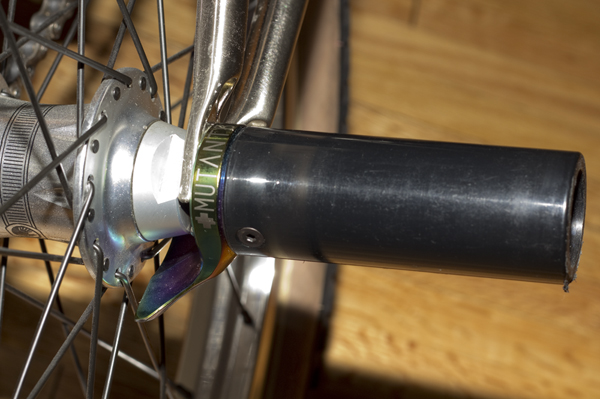 The Peguard is just that, a peg and a hub guard… All in one! It’s a pretty straight forward concept that in all reality, is pretty surprising no other brands have tried out… to our knowledge. The Peguard comes from the mastermind, Nuno Milhinhous, from Mutant Bikes down in Portugal and has seen its fair share of changes over the years in its prototype testing phases. Originally, we spotted this peg on Bikeguide way back in 2009, with different versions surfacing since, all of which better than the previous design.

The concept was that with so many different styles of hubs and guards and people running into issues like having to spread the backend of their frame a bit to make it all fit, running the guard on the outside of the dropout would make for a more universal style guard. 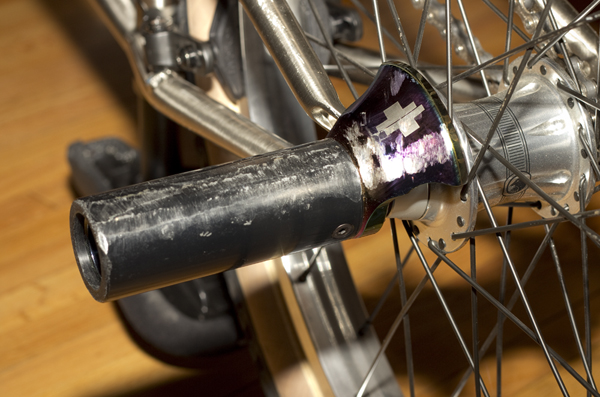 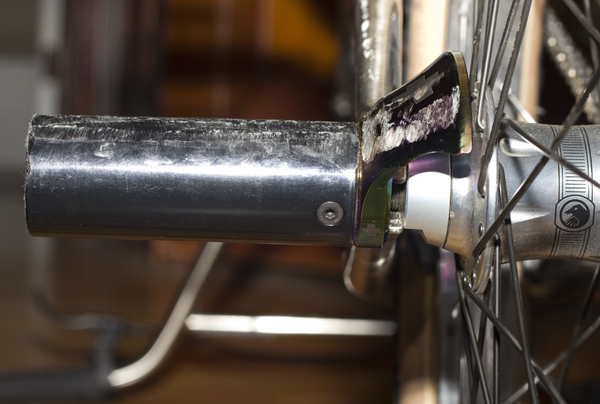 With a peg and guard being one, obviously the biggest issue is “how do you rotate the peg to extend the life?” and that was actually one of the main things that lead to different versions, like this one with the plastic sleeve that allows you to rotate the sleeve to grind on both sides and the ability to completely replace the sleeve to start over fresh. 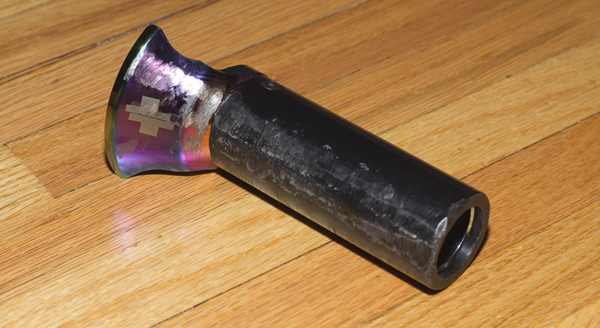 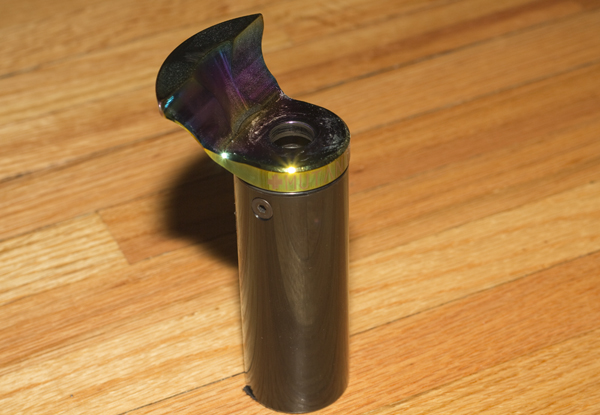 The one piece guard and peg are made from aluminum similar to many of the plastic peg options available. The plastic sleeve is held in place by two small screws that hold it tight on both sides. 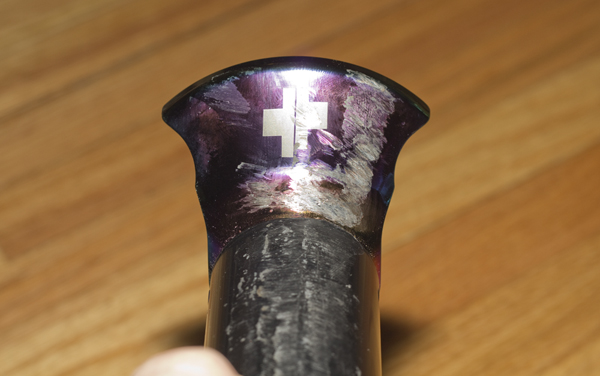 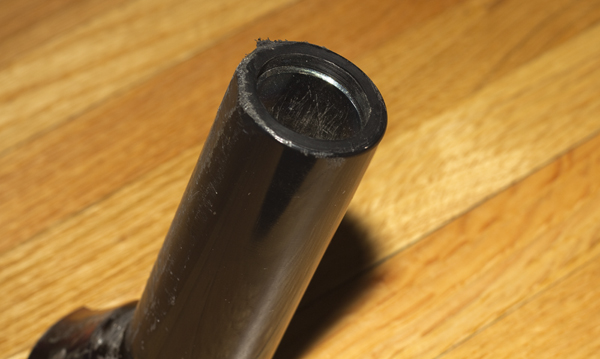 The sleeve of the peg sticks out a little further than the aluminum to help prevent it from being damaged from grinding, allowing the sleeves to be changed easily without warping the edges. Due to the guard being on the outside of the drop out, the peg also sticks out a little further, from drop out to the end of the peg it’s around 4.25″ long. The sleeve of the peg is about the same size as most pegs out there. The overall diameter is around 36 / 37mm as well. 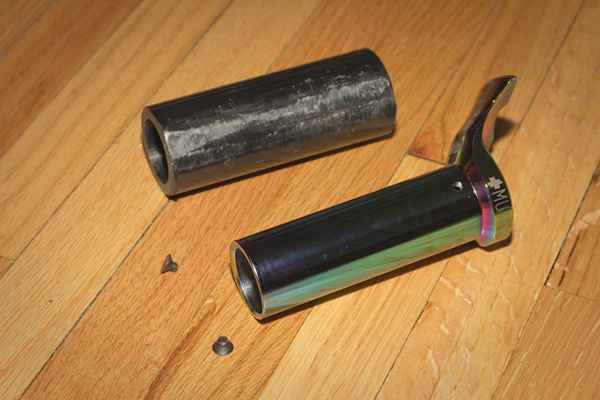 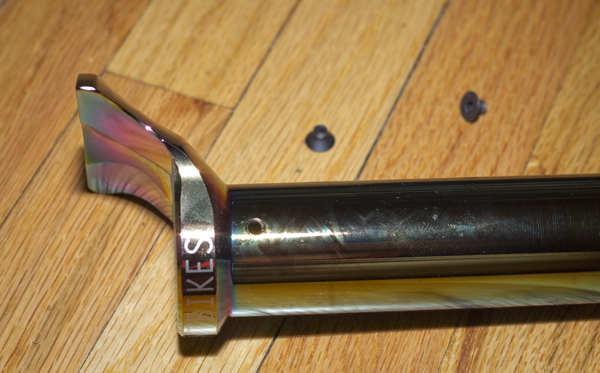 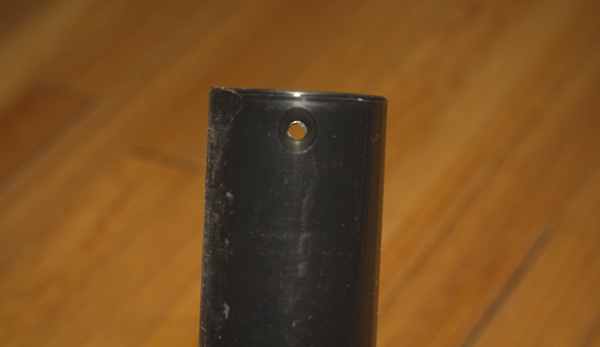 Overall, riding the peg has been solid. I’m not crazy with grinds by any means and I haven’t really put these to work on more than a few ledges and smaller rails. As you could expect with any plastic peg, the sleeves aren’t going to last somebody who puts their pegs to work on cement, rough ledges frequently. But, if you’re more of a park rider, these are a solid option to run. One thing I was pretty concerned about was the ledge or rail riding up the guard and into the spokes, but with the lip and slightly concave shape of the guard, I didn’t run into any issues. The fit of the guard on the drop out was good, and between my Fly Bikes Montana frame with Investment cast drop outs and the Shadow Conspiracy Freecoaster, I didn’t have any issues with it fitting properly.

One issue I ran into with these was when I was tightening the peg down. The guard would rotate unless I held it in place with my hand. If these had some anti-roll pins, that would be great. That’s about the only big issue I felt. The peg itself never rotated from grinding! Just wanted to be clear on that.

The Peguard will be available worldwide in the end of January! It will come in colors of anodized black, red, orange, blue, Polish and oil slick like the one I’m running with the black plastic sleeve. It will come with a 10mm adaptor to give the required spacing of the guard into the spokes and front hub that is different from the rear hubs, also to convert the 14mm to a 10mm one so you can run it up front. It will retail for around $39 and will be available here in the U.S through QBP! So shops can hit them up to get them once they’re in stock!

You can find out more about Mutant Bikes and their products on their website — MutantBikes.com