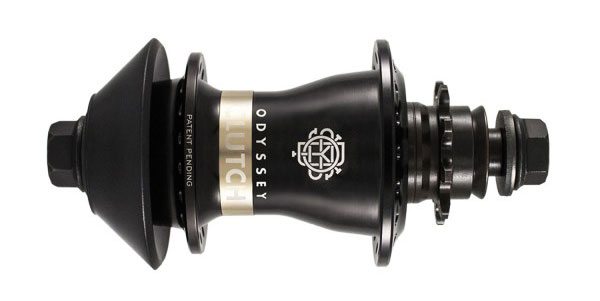 If you have Instagram and you follow a lot of shops and distributors, you may have been getting pretty excited the past few weeks as they have started to get the long awaited Sean Sexton signature Clutch freecoaster from Odyssey in stock and ready for you fakie masters to get the hub strapped to your bike. Today they released all the information on the hub along with 6 (Yes, SIX) videos explaining all the finer points of the hub. We have been anxiously waiting to see just what makes this hub so special, and now we have the chance. Let’s take a closer look!

Alright, so let’s talk specs and details. The Clutch freecoaster hub starts out with a 6061-T6 aluminum shell with an additional silver sleeve that rotates that allows you to adjust the slack of the hub with a simple turn of an allen key to increase or decrease the amount of slack.

Inside is where things really start to get interesting. Odyssey have gone with a traditional freecoaster design, but they have done a number of things to modify the hub which should eliminate a lot of issues that are traditionally found on freecoasters that use the KHE internals.

To start things off, they have made it so that the axial load taken on the driver has been eliminated by creating a circle plate that sits on the non-drive side that essentially takes the shock on an axial impact and absorbs it into the shell and then the oversized bearing on the non-drive side, which also takes the impact from axial loads going the other way and it’s strong enough to hold up to it. Because of this, the driver no longer needs a traditional bearing and can run on a single needle roller bearing and shouldn’t blow out from axial loads like traditional drivers do. They have also made it so the driver is press fit into the larger bearing to prevent hub wobble.

Next, they’ve created a unique two-piece plastic ring that can be expanded with the turn of an allen key — which is accessed through the silver ring on the shell. This allows you to adjust the amount of slack that the hub has and can allow you micro adjustments versus having to go based on the width of the washers traditionally found on the KHE style internals. Also, by doing this they have eliminated the need to pound out your bearings to access the axle, which keeps the bearings from being damaged from removal and installation. Ultimately increasing the life of the bearings further.

Also, as part of the plastic pieces used to adjust the slack, George French has developed a durable drag mechanism that fits on the axle itself instead of relying on the two ball bearings and spring that runs through the axle. By doing this, they have removed the need to drill a hole in the center of the axle. When you drill into the axle, you are decreasing its strength pretty dramatically, so having a solid axle is pretty amazing. They have also designed the axle to use a female chromoly 14mm bolt with a 17mm hex head on the non-drive side and then a chromoly 3/8″ bolt with 17mm hex head on the drive side with a 14mm spacer to still fit in the traditional driver that is found on other freecoaster hubs. All in all, this axle design is stronger than a 14mm male chromoly axle.

Because of these changes, the Clutch hub might just eliminate a number of the issues, if not all, found in the traditional KHE style freecoaster hub. They have patents pending on the design, so don’t expect to see any other brands utilizing this design, unless Odyssey start to license it out further down the road.

The Clutch hub is available in black, 36-hole, left or right side drive with a 9-tooth driver only. The hub weighs in at 22.5 oz. (640 grams) and also comes with a compatible nylon hub guard that snaps on and off without removing any hardware.

You will be able to pick up the hub for $189.99 through BMX shops and mail-orders worldwide starting now. Some locations may be a little bit out still, but expect delivery soon.

You can learn all about everything we’ve discussed above in much greater detail as George French has put together these videos showing you exactly how this hub works.

The Gap Mechanism and Adjustment