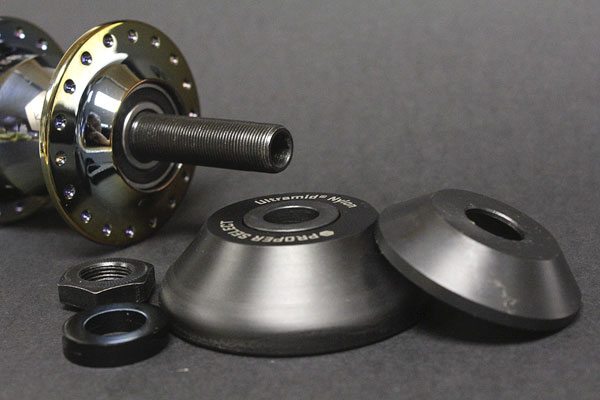 With the ever growing popularity of grinding and finding a way to grind smoother, further and all around better, we’ve seen a lot of innovation from pegs to hub guards over the years. We’ve gone from heavy oversized pegs to titanium, aluminum and plastic pegs and we have seen hub guards in multiple variations as well from guards you zip tie on to designs that snap into place or slide on replacing the existing hardware. However, there’s still room for some innovation. The guys over at Proper Bike Co. have been busy working on their new range of products that have just recently been released worldwide through BMX shops and mail-orders. One of the items in particular we thought was pretty interesting are their new Select hub guards that use a slightly different design than other options on the market. We got the inside scoop on just what makes these guards so special, so let’s take a closer look and find out the details! 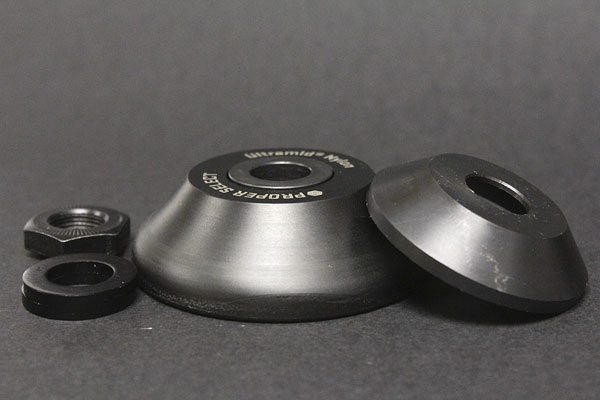 The new Select hub guards from Proper Bike Co. are available in two versions; front and rear, with unique variations between the two that were designed to hold up to special requests by the team. 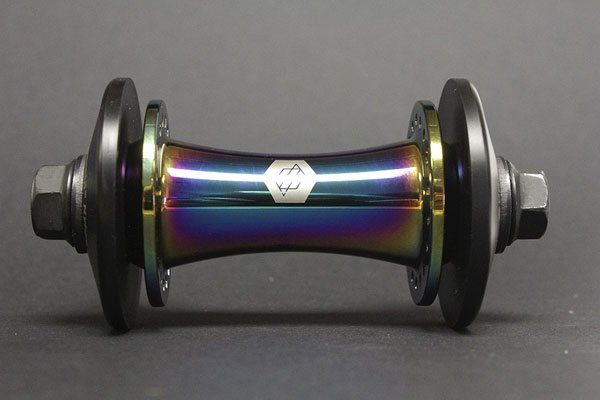 The Select front hub guard is CNC matched from a unique nylon compound that’s called Ultramid®. The guard features a 63mm diameter and 12mm width ensuring that it not only gives plenty of coverage, but also fits a large range of hubs. Each guard is supplied with 2 heat-treated C1045 spacing washers; threaded and non-threaded, so that the guard can fit Proper’s new Select front hubs and V2 Microlite hubs, but it will also fit other female hubs with a 15mm overall diameter axle for 10mm bolts and approximately 12mm thick cones. The Select front hub guard can be run on both sides.

What is so unique about the front hub guard?
We’ve made aluminium guards to fit our front hubs for quite a few years. All well and good, but since those came out BMX has continued to evolve and plastic pegs are now the norm for a lot of riders, including some our team riders. Our team gave us quite a lot of good feedback. It doesn’t take a genius to work out that if you’re running plastic pegs and you slide onto the guard, you’ll get a more consistent grind if the guard is made of a similar material. If you’re grinding an aluminium rail (which obviously you can with plastic pegs) and slide on to an aluminium guard you are in grave danger of the dreaded “scorpion”. James Curry’s pegs were nearly as wide as his old aluminium guards, so he’d often end up grinding on top of the guards, partly defeating the object of having guards in the first place. That and you’re grinding on a thin slice of aluminium which gives you far less control. The obvious solution was to make wider diameter nylon guards.

We’re aware that there’s been universal nylon guards available for years, but we wanted a tidier solution that works and look great with our new hubs. We’re also aware that some brands offer nylon guard that fit over the cones, which is great if you’re new to the hub game. We wanted our guards to fit our new Select front hubs but also as many previous models as possible, and some hubs from other brands using a similar design. Our guards simply replace the cone nuts and, because the nylon we used is super tough, there’s no need for any metal inner. In the end, a metal inner would probably have made the front guard weaker because the nylon would have to have been worryingly thin. – Jamie Cameron 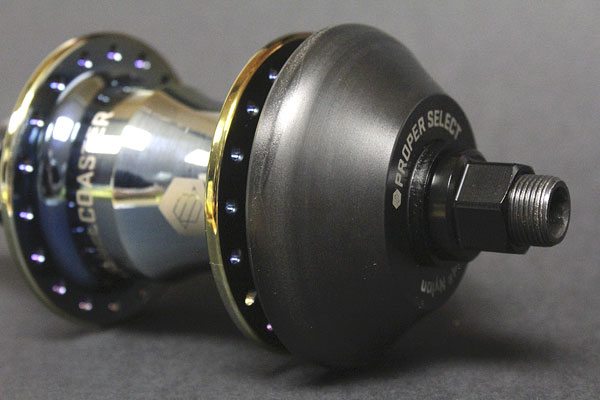 The Select rear hub guard is similar to the Select front hub guard as it is CNC machined from the same Ultramid® nylon, but this guard has a 4140 chromoly insert inside of the mold to help increased the strength because most of the impact of grinding comes on the rear. The Select front hub guard has a large 70mm diameter and a 22.5mm width ensuring plenty of coverage. This hub also comes with a custom heat-treated 4140 chromoly lock nut, spacing washers and top head washer. This guard fits every 14mm axle hub and 15mm Female hubs. It however does NOT fit 17mm axles for 14mm bolts, so G-Sport’s Ratchet, Odyssey Antigram and BSD’s Back Street Pro hubs do not work for this guard.

What’s the story behind the rear Select hub guard?
Similar theory to the front guards. We needed a nylon guard to replace the aluminium guards we’ve offered previously or the inferior nylon guards already available. Our team rider, Sam Cunningham, actually drew the original design and although we altered his design slightly — his design has a threaded chromoly inner which would fit Proper hubs but was far from universal — we’ve stuck to his concept of a black nylon guard with chromoly inner that provides plenty of support. Again we opted to replace the cone nut rather than the alternatives — a universal guard that means you’d need to spread your dropouts, or a guard that fits over the cone nuts and only fits one hub.
The first samples we had were okay, but the nylon chipped when you hit it hard. We went back to the manufacturer who suggested a new compound of nylon that was supposedly much stronger. Luckily the new nylon turned out to be stronger than we dared hope and slides a treat. That is how we ended up with the Ultramid® nylon compound. – Jamie Cameron 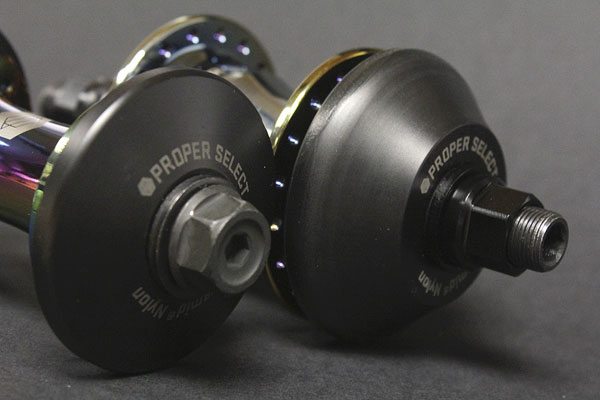 The Select hub guards are available worldwide through BMX shops and mail-orders that carry Proper Bike Co. now and come in black only.

You can find out more about Proper Bike Co. and their products by visiting their website — ProperBikeCo.com