Are you looking for a new app to give you something to do or just motivate you to try and film or shoot some photos to get some new riding clips of yourself? Our friends over at Shrick App hit us up with some details about their app that has been around for a little while now that you might just like. This app is more than just another one of the social media sites filled with selfies and stuff you don’t really care about. This one is strictly filled with riding, lifestyle and gear that you are into and they even give you a chance to win some rad stuff for using the app. Curious? Well, let’s take a look at some of the features… 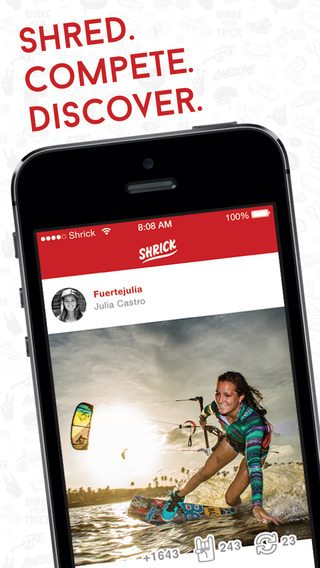 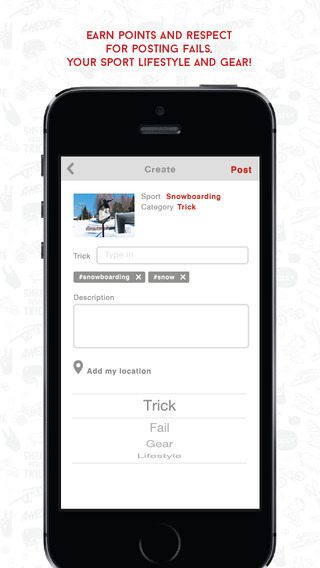 Alright, so let’s start out with the details… This app is designated for all action sports, so there’s BMX, skateboarding, freestyle moto-x, snowboarding, surfing, wake boarding, mountain bikes, scooters and about 15 other sports, some that we didn’t even think were a thing, that people can get in on. The concept is pretty straight forward, you have your account which allows you to film or shoot photos of tricks you’re doing or working on, and you’re awarded points based on if it’s a new trick you’re bringing to the table or a more common trick that other people are doing with bonus points for Likes and Shares. You can also post up shots of you taking a heavy slam, your setup or just chilling, since it’s not all about the tricks you’re doing, right?

So, once you have that all going, you can follow others or gain followers, check out other riders around the world and see what they’re doing and maybe even get into a little challenge to see who can pull off tricks first or get some insight on how to do a trick you’re working on. 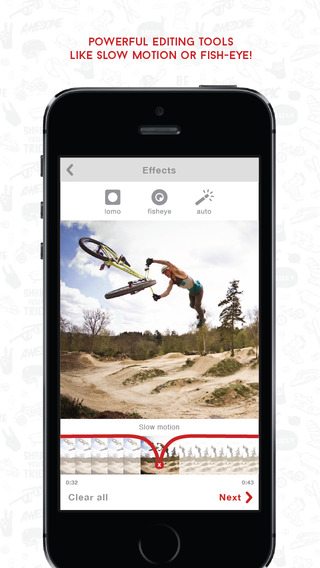 There’s a few editing options on the app, like the ability to slow-mo clips, add a little color or give the clip or photo a fisheye effect. We were into the options except for the fisheye. It’s more of a distortion of your clip because it’s not making your camera lens capture more, but more or less just bulging the existing clip to give it the look of the effect, if that makes sense. But, that’s about the only thing we weren’t into when it came to the editing abilities. 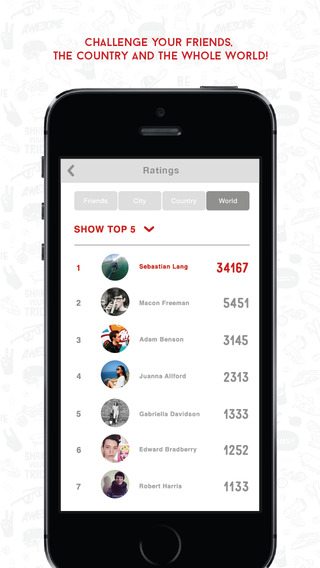 As we mentioned above, they have a points system based off the number of tricks you post up, Likes or Shares you get. That system ranks you globally against others which might just be the motivation you guys are looking for to keep the progression going for yourself if you’re the competitive type. The more you post, the more followers you gain, the more points you can rack up… Seems pretty simple, right? 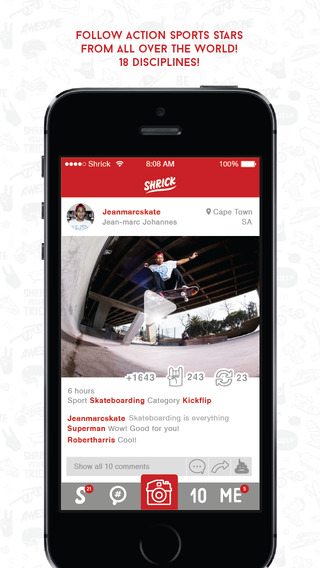 Since there’s more than just BMX, if you’re into other sports like skateboarding, moto-x or wake boarding, you can follow people who are into those sports so your feed will have a mix of footage and photos to check out like on Instagram. That’s kind of a perk since it’s easy to get sucked into BMX all the time and nothing else, you can find yourself a little burned out. So, mixing things up is always a good idea.

Plus, they’re always posting up giveaways for you to win. Just scrolling through the app right now we see there is a GoPro Hero 4 up for grabs and a trip to FISE Chengdu that’s coming up in China! All for getting the most likes on a single post? Can’t go wrong with giving it a shot.

So, overall, the Shrick app is an option for those of you looking to mix things up or find some fresh motivation to push yourself to learn some new tricks or just link up with different riders from all over the world. The app is available for FREE, so you’re not out anything if you give the app a go and you aren’t into it.

You can download the app in the App Store for your iPhone: RIGHT HERE

You can download the app in the Google Play Store: RIGHT HERE

Still want to know more? Check out their full press release below to get their full scoop on the app! Questions? Let us know in the comments at the bottom!

“SHRICK: action sports community app is now available on the App Store!
Who’s the fastest, the strongest and simply does the most flawless 540 Shifty? You think you know the tops? What about the country? Your city? Your very neighborhood? The time has come: very soon we’ll find that out! A complex leaderboard system integrated in our new iOS social network for extreme sports athletes and their fans is aiming to settle this argument once and for all. Do you feel the tremors? Shrick kick-starts a global real-world free-for-all tournament, that opens new horizons both in the world of sports and the world of Social Media!

Feeling the passionate support of your friends, learning with the best, sharing your unmatched triumphs and clumsiness – all that is priceless. Creators of the new mobile social network for adrenaline junkies called Shrick (Share+trick) realize that. Whether you’re into super-‘mainstream’ sports like snowboarding or if you’re a fan of less wide-spread activities like racing on snowmobiles, you’ll love Shrick!

New incomparable app Shrick aims to improve your riding experience, adding a fresh edge to your favorite hobby. It has intuitive interface and includes built-it tools for photo and video editing, letting you add special effects like slow motion to your footage. Shrick also introduces a system of ratings and leaderboards, letting you compete with friends and the whole world by uploading your tricks. Facebook sharing options integrated into the app while the Geolocation feature (to follow) will let you share cool riding spots with mates.

Our neatly coded leaderboards let you not only work on your ego, but also find cool and promising riders in your discipline, in the city, country or in the world.
With our slow motion feature you will be able seamlessly emphasize the right moment in your video, making your trick look even better. Advanced optimization system does its job in the background while you’re editing the video (it only takes up to 8 seconds) so when you press SEND, your video is ready to go!
Your feed updates in real time, so you see every like and every comment as they are being posted.

Our Gear section is something we are particularly excited about. It lets you show your friends what ride helped you achieve the results you have or perform a trick you have always dreamt of mastering. By the way, you can share your failures too – posting in the Fail category also lets you boost your rating (if you gather enough likes, of course).

Professional moderators are on the lookout for abusive content, while users have the ability to help them via Post Report system.
Shrick invite-only beta (version 0.9.2) was released for iOS devices on February 08, 2015, while the public release has been dropped on May 23, 2015. Android version as well as HTML5-based desktop interface of the app will be available in late 2015.”

You are here: Home / Reviews / Insight: The Shrick App