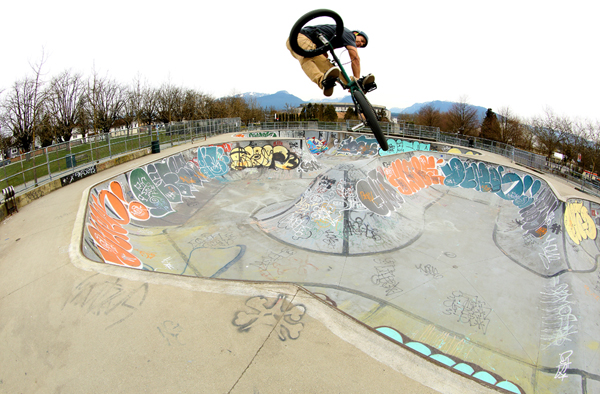 Over the past year or so, there’s been a couple riders from Canada that have been really catching my eye. One of those guys would be Colony‘s connect up there, Brandon Van Dulken. Brandon’s one of those riders that you can’t really classify into one thing since he’s proven that he can kill it at a park, send it down a handrail and roast a set of trails. With a steady stream of footage coming from him lately, we figured it would be a good time to get to know this guy a little better. Let’s see what he had to say!

What was it that first got you into BMX? Any early memories come to mind?
I always pedaled a mountain bike around town. One day I decided to stop at the skate park and ended up seeing all these guys killing it on BMX bikes. I took one for a ride around the park and I knew right away I needed one.

You have been doing it for Colony for a little while now. How did that opportunity come about? How are things going so far?
Blaise Olson (killemall distro) was in the works for starting up a distro in Canada for Colony and some other companies. They needed a guy to rep/ride the parts in the Western part of Canada. At that time I seemed to be riding well at some local jams so Blaise eventually filled me in with what he was working on and asked if I wanted to be a part of it.

How are things going so far?
Things are going very well. I’m really hard on parts and have a tendency to break things, but everything has been holding up great. Love it. It’s especially rad to have a company owner like Clint who still shreds hard and is involved with BMX for more than just the business aspect. 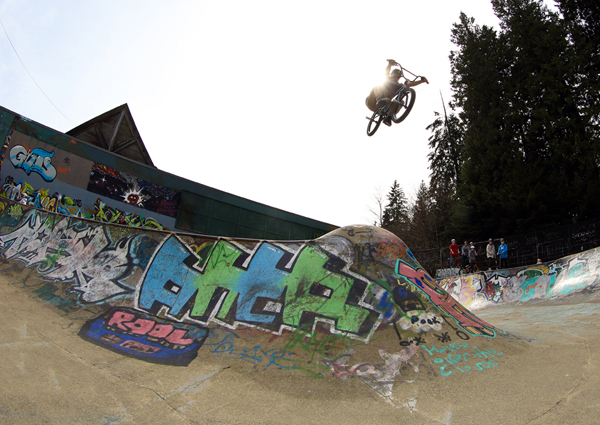 You’re going to have a signature color way for the Teddy frame that will be available real soon, right? What color did you decide to go with and when will it be hitting shops?
I chose gunmetal grey. I don’t like flashy colors and I think darker grey goes good with almost any other color for parts. As of right now the frame is available! 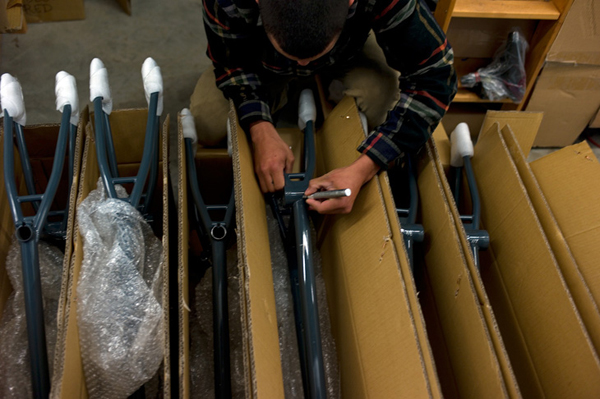 How are things going with Killemall? Do those guys have any trips or cool projects in the works with you coming soon?
Blaise at Killemall runs a jam series called Canadian Concrete. So in the mix with driving to a jam location, we are going to take a couple days driving around southern B.C with the team and make a little road trip video of it. A couple bigger trips are in the works as well.

I know you just had an edit drop the other day, but have you been working on any other edits? When can we expect to see some more fresh footage of you popping up?
I had another Colony 10 clip video drop the other day. As of right now I’ve been saving solid clips for a few bigger projects.

Where are you usually found riding these days?
I usually hang out at Railside skatepark with the young shredders or just have a good pedal around looking for street spots. I’m definitely going to make an effort to get out to the trails more often this summer. 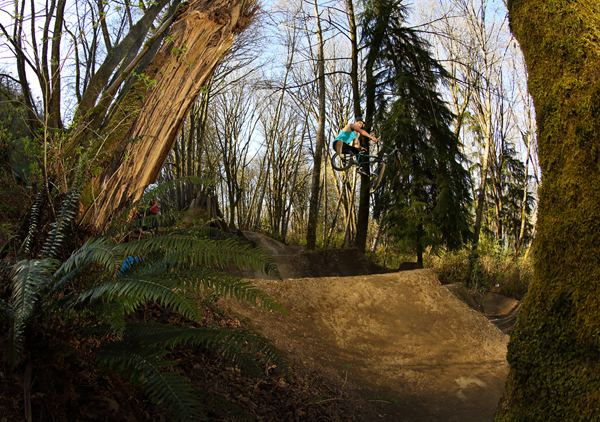 Do you have any trips planned or places you would really like to get to this year?
I’d really like to get out to either Europe or Australia. Since a southern U.S road trip I’ve really got an itch to jump on a plane to somewhere. Travelling is another huge passion of mine and it’s so exciting seeing a new environment and culture.

You’re definitely a shredder on park, street and even dirt. What’s your favorite stuff to ride? What would be your dream spot to ride?
I love flowing around, whether it’s a big bowl or trails. Need to hit a big rail once in a while to scare the shit out of myself too. My dream spot would probably be something creative with dirt jumps and ramps involved.

Let’s say you’re playing a game of B-I-K-E with somebody. What’s the one trick you really hope they don’t do that you can’t do?
A downside double peg grind.

Who are some of your influences when it comes to riding? Care to share a few riders that really get you stoked to go ride?
There’s seriously too many to name. If I watch a dude killing it that’s smooth, fast and getting burly, I’ll get stoked and want to get out and ride.

What do you think you would be getting into if you never got into BMX?
Working in a garage and racing cars, probably something along those lines. 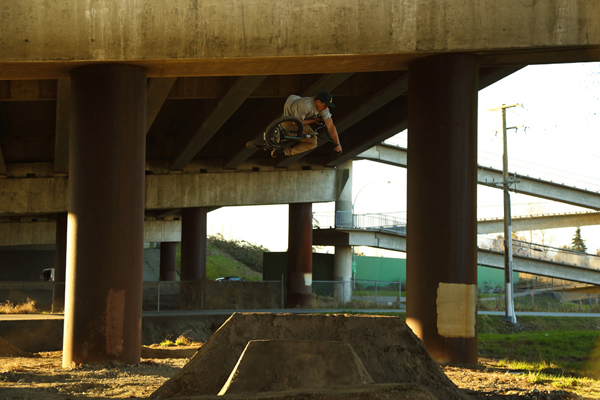 What are you usually up to when you aren’t riding these days? Do you work or go to school or anything?
I spend as much time as I can outdoors hiking and shooting photos usually. I try to work as little as possible throughout the year. As far as school goes, I think you will learn so much more being out in the world experiencing things other than being in a classroom with a big student loan.

Other than riding bikes, what would your dream job be?
Working for National Geographic as a travel Writer/Photographer.

Are you into shooting photos because of BMX or was it something you did beforehand?
BMX kind of kick started it for me since they both go hand in hand. I bought a camera about a year ago and the more I learn about it, the more I want to progress at using it.

If you could get a huge travel budget to go ride any 5 places around the world to film. Where would you go and why?
-Anywhere in Australia because of the weather, women, spots to ride and beaches.
-Barcelona. Legendary spots and weather. Culture as well.
-Austin, Texas. Best vibes and BMX scene hands down. I had a great time there last time I went.
-France. I’d like to take in the European culture and they have some really unique architecture there to ride.
-San Diego. Huge scene, rad people, lots of nice beaches and fun things to do. 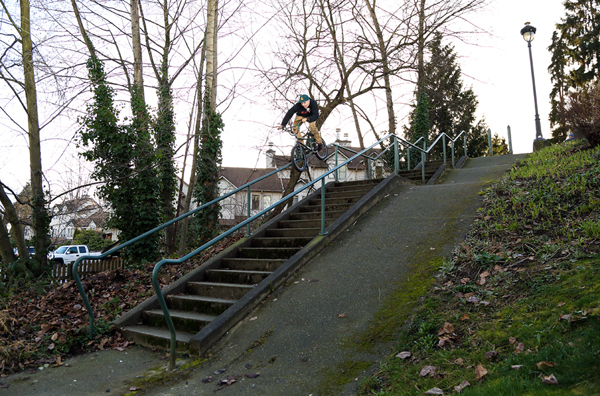 It’s Friday night… What are you usually getting into? Are you much of a partier?
I like to keep it pretty mellow. Once in a while getting rowdy is good, but I’d rather just chill out with some friends, than to be in a club where you can’t understand what someone is saying 2 feet away from you.

What’s the last song you heard, movie you watched and website you visited?
40 Day Dream by Edward Sharpe and the Magnetic Zeros. Last movie was Into the Wild. Website was TCU.

Where do you see yourself in 5 years?
Not sure, I’m not really one to plan my life out but I’d like to be travelling still and enjoying the world. Maybe have my own house by then too. 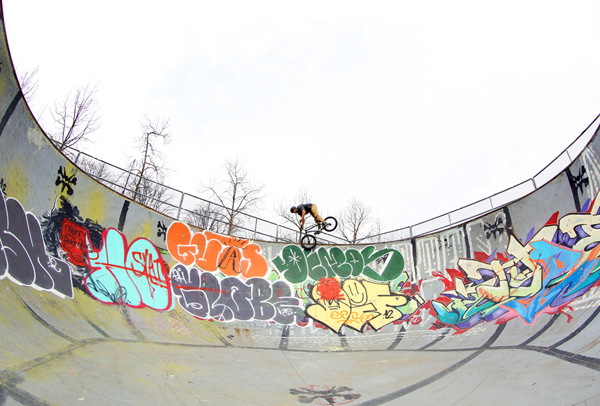 Do you have any shout outs or thanks?
-Mom and Dad obviously
-Blaise at Killemall Distro
-Clint and Cooper at Colony
-David Birnie at Timebomb
-Everyone in BMX that keeps me stoked

Anything else you want to say?
Hail satan and stop scootering.

You are here: Home / Interview / Brandon Van Dulken Interview
Note: This site contains affiliate links and we could recieve a small comission that supports this site if you were to make a purchase on their websites using our links.