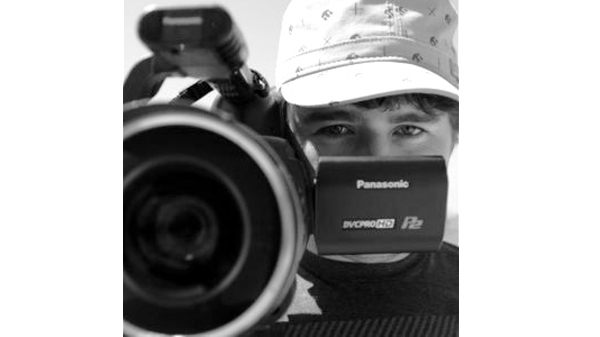 Unless you’ve been hiding in a cave somewhere, you will have seen and loved Will Stroud’s video work – creating some of the most popular BMX videos over the past ten years, Will always puts a focus and creative edge into his video parts, be it with Nathan Williams, Corey Martinez, Chris Doyle, Garrett Reynolds, Van Homan, Jamie Bestwick… the list goes on and on. Don’t forget he also balances his video work with running three stacked BMX teams under the Greenhouse umbrella; it helps having the likes of Cinema, Duo, and Verde on tap to film with, that’s for sure. So we caught up with Will in between filming duties currently with Monster and working on the upcoming full-length DVD for Cinema…

First BMX bike you had:
I got my first real BMX bike in 1994 from the local bike shop near my parent’s house. It was a blue Hutch with chrome rims and one piece cranks. It was badass and I rode that thing for a few years before eventually breaking the frame. Before I had that Hutch my brother and I always had cheap bikes from Wal-Mart that we would just destroy jumping tiny jumps in my parent’s backyard.

First BMX Video you watched:
The first time I saw a BMX video was back in the early 90s when I was in the 6th grade, so this was definitely the VHS days. One day I was in the mall with my mom and brother and we walked into this surf shop called The Surf Report and they had Ride On playing on the in-store TV. I remember standing still in the store just fixated on how cool the video was. My parents bought me a copy of Ride On that later that year and it’s still one of my all time favourites in my VHS collection. I got to meet Eddie Roman at NORA cup last year and he was such a nice and humble guy. I don’t think he realized how big of an impact that video made on BMX in the 90s.

First BMX event / comp / show you went to:
The first real BMX comp I went to was in Greenville at Jaycee skatepark in ‘95 or ‘96. I remember watching guys like Dave and Tim Mirra, Colin Winkelmann, Mike Tag and Steve Crandall riding in the comp. It was sort of a local comp but a lot of pros showed up since it was Mirra’s local park at the time. That was back in the day where a truckdriver over the box was a banger trick! I’m really glad I got to witness what freestyle comps were like back in the 90s.

First Video you watched and thought, “I’m doing this”:
I was really into watching every video I could get my hands on back in the VHS days. Back then I rode with my brother and Chris Doyle almost every day and we would watch videos at my parents house and then go to the 401 trails. But I think it was the old Props videos that really sparked my interest in filming. I met Marco, Chris Rye and Stew Johnson when I was in college and they gave me the opportunity to become a contributing filmer and editor for Props back in 2000.

First Pro BMXer you met:
The first pros I met at my local racetrack were Craig Reynolds and Barry McManus in ‘95. They were doing a clinic at our track and they were so cool and nice to all the younger kids. They let us borrow their tools and ask a million dumb questions. The first pro freestyler I met was Dave Mirra later in ‘95. My dad took my brother and I to Greenville to ride Jaycee skatepark and Mirra showed up. It was surreal since no one else was at the park besides Mirra, my brother and I, and we rode with him for a few hours. This was back before he really blew up and became a BMX celebrity. He had a brand new decked out Haro Blammo with Shimano DX pedals and all the best parts. He was doing flips and 360s over the box and airing really high on the quarters. We were so fucking stoked and it felt like he was doing a private demo just for us. Mirra was so nice and friendly to my brother and I. He signed a few autographs and even gave us his phone number so we could come ride with him again! Can you imagine a top pro giving some random kids their phone number at this day in age? It’s funny how those little moments had such an impact on my brother and I and may have even been part of the reason that we stuck with riding through our high school years when all the other kids in our town only played baseball or football. A few years ago I told Mirra that story over a beer and we had a good laugh.

First camera you bought to shoot BMX:
The first professional camera I owned was my VX-1000 that my grandfather bought for me when I graduated high school in 1999. I actually still have that camera sitting right here in my office and will always cherish what I learned using that camera. Now I’m primarily using a first generation Panasonic HVX-200 that I bought in 2006 when I found out I was going to start doing videos for the Levi’s BMX program. I’m definitely due for an upgrade, but I hate spending money on camera gear until something breaks. I also have a Canon 7d that I use for a second camera. I’m not against DSLRs, but they don’t suit my filming style very well, so I prefer traditional video cameras to use for my primary filming set-up.

First rider you photographed or filmed:

Back in 1997 I remember Doyle getting a letter in the mail from DK telling him they were about to start filming for the video Damn Kids and they needed each rider to submit footage to go towards their parts. Chris asked me if I’d be down to help film him at our trails and of course I said yes. At the time I had a pretty crappy Hi8 camera that my grandparents let me use and we filmed for a few months at the 401 trails. I remember Chris being so patient with me as I was learning to film. He would just be doing all of his hardest tricks on command over and over until I got a decent shot. Chris’s patience gave me the confidence to keep filming and not get discouraged when I would make mistakes. Later that year Dave Freimuth came to NC to finish filming Doyle and Leigh Ramsdell’s part for Damn Kids and I gave him all the footage I had filmed of Doyle. And it was pretty rad that Freimuth actually used a good amount of my footage of Doyle in Damn Kids. I really didn’t know what I was doing at the time so this was a huge learning experience for me filming-wise.

First professional job for BMX photography or video:
My first professional job that I got paid for was filming Roots Jam in 2000 for Props (Issue 37). I was going to the contest to ride in the AM contest so I hit up Chris Rye and asked him if I could film a section for Props and he said yes. That year I met Ronnie B and all the UGP guys who were all super cool. Ronnie and I became good friends and later that year he asked me to produce a full-length video for the following year’s Roots Jam. The 2001 UGP Roots video was the first full-length project I shot, produced and edited mostly solo. Matty Branscombe helped me out with some of the editing and technical stuff since this was the first time I ever used a Mac or Final Cut Pro. Shout out to Ronnie B for giving me the opportunity! After that project I filmed and produced another full-length video for the Roots 2002 comp… — CLICK HERE TO WATCH THE VIDEO

First mess up:
Nothing too crazy, but I used to always mess up my white balance when I first started filming. I remember getting yelled at by Chris Rye one time when I sent him footage for Props and he had to color correct all my shots, haha.

First video published / featured:
My first real project was a video that Cory Muth and I made called Stock. After Doyle and I finished filming his Damn Kids part I continued filming at our trails and local riding spots for another two years or so. One day Cory and I were watching a few tapes at my parent’s house and decided we wanted to put out a full length video. Cory taught me the basics of computers and editing and we made the video since we had so much footage from our local scene. The video came out on VHS in 1999. I put Stock on my Vimeo channel about two years ago…

There’s no way we couldn’t drop this interview without the new Etnies X Cinema in Portland edit that just dropped the other day that Will did. – Kurt

VISIT: FRONT PAGE // DAILY SECTION // BMX COLOR APP // BMX VIDEOS
You are here: Home / Interview / Firsts: Will Stroud
Note: This site contains affiliate links and we could recieve a small comission that supports this site if you were to make a purchase on their websites using our links.