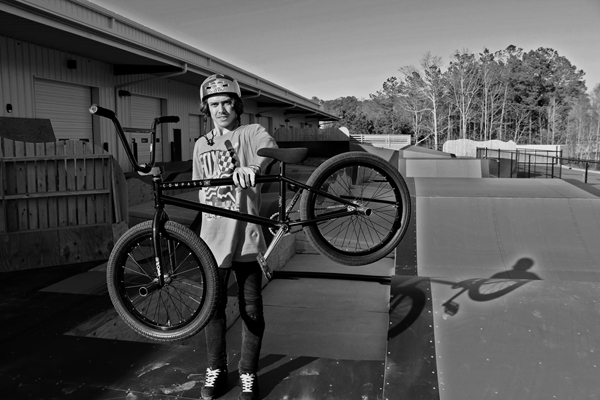 It’s pretty clear what a lot of dedication, motivation and passion can get you in BMX and Kenneth Tencio is one of those people who is a perfect example of it. After years of hard work and dedication he is finally getting the well deserved support he needs to explore the world and show everyone just what he is capable of. This rider, who comes from the little country of Costa Rica, has been blowing minds the past few years on ramps, the streets and trails through the different edits he has put out and the different contests he has been able to make it to.
Yesterday, it was announced that Kenneth had joined the Superstar team with a banger of an edit that really got us thinking that we didn’t know very much about the guy. We figured it was time we got ahold of him to find out just what his story really is. Let’s see what he had to say! 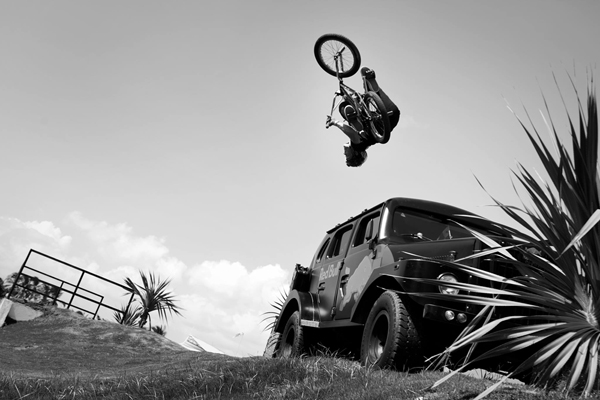 What was it that first got you into BMX? Any early memories come to mind?
I knew nothing about BMX when I first learned about it. I just went with some friends to see an event and I fell in love, haha. Two months later, I bought my first bike with my school savings.

It was just announced that you have joined the Superstar team! How did that opportunity all come about? I know I was stoked to see you finally get picked up by a bike sponsor.
I met the current team manager in Mexico while they were touring. Luckily I was there for a few days and they invited me to come along with them during the trip. This was over a year ago, but we continued to stay in contact and they eventually offered me a spot. I am so happy about this because this year I also began to ride for Red Bull and Fox. It’s crazy because I’m coming from a country where most of the people don’t even know where it is.

I know you just had the banger of a welcome edit drop, but do you have any projects in the works with Superstar yet as far as more videos, trips or signature parts that you can tell us about?
We’re both very happy with the work we made in these first few months working together and we are talking about our next contract. I think good things are coming with Superstar for 2015! 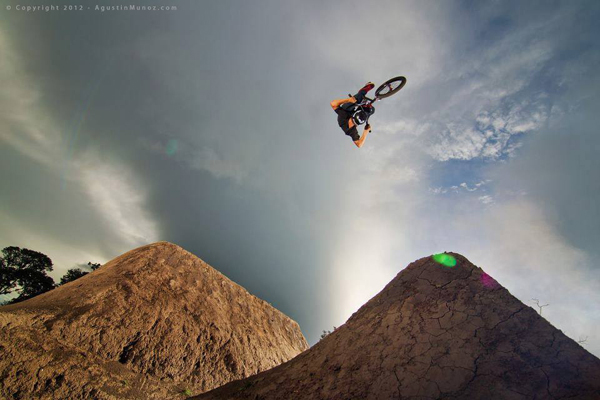 You’re doing it for Red Bull down in Costa Rica. As I would imagine, they will be keeping you on the move all summer long with trips and events to hit up. What do you have in the works with them that you can tell us about? Any special projects you are psyched for?
I have thought about doing some traveling around the U.S. I’m planning to spend more time training, but were working on a video project for the end of the year right now.

How are things going with Fox and Novik? Do you have anything cooking with them you can tell us about?
I’ll be back in my country soon and the idea is to do a tour in the most remote locations of Costa Rica sharing with the locals, who don’t have much to ride to ride but some big dreams. I want to show them they can do what ever they want in their life if they really have as much passion as I have had.

What’s the story behind Ciclo Herediano? Was that the shop that really got you hooked on BMX down in Costa Rica?
Ciclo Herediano was my first sponsor. After continually changing parts for my bike, they decided to start supporting me because it was not easy for me to afford the parts. During the first year, they were my biggest booster because I had no longer to wait months to get money to buy the parts. I could finally train every day of the year, no matter how many times my bike broke. It is the best because we are family, so no matter what, they always support me in any way they can. It’s not just parts, sometimes the tips they give me are worth more. That’s what I appreciate most from them.

Let’s talk a little bit about that new edit of yours! Holy crap was that good. How long did you work on it for? Did you have a pretty set plan on what you wanted to do when you started or did it just all fall into place on its own?
I ride all kinds of disciplines. I just love riding my bike. Superstar helped to bring me to France for the FISE contest which I got into the final and best trick in BMX Park. normally people know me more as a park rider, but my favorite is and has been street. This year I’ve made ​​3 videos, 2 of them for Vital BMX and one for Woodward, which were mainly park, so for this I decided to take it back to the streets. After the FISE, Arnaud Wolf took time to show me the street spots in France. I spent 3 days filming some street in Montpellier. 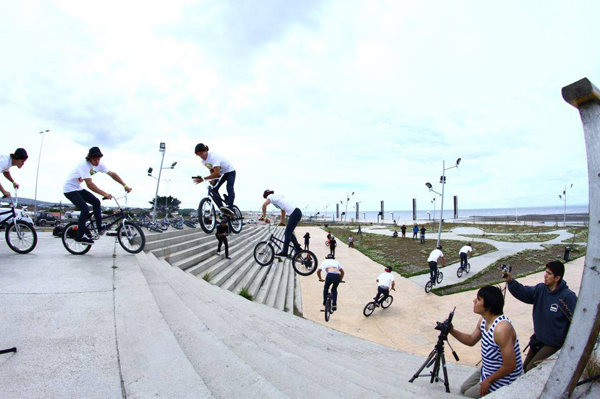 What attracted you to street? How did you get so good at riding park?
I began riding street because we don’t have a lot of skateparks where I am from, so it was always difficult to learn something on a box jump. The only way to do that was by riding dirt jumps, which I really enjoy too. I met Daniel Dhers who invited me to his house and that was when I started to ride more park. I still divide my week in days for park, dirt or street or sometimes every thing in one day, haha!

I noticed you have been spending some time out in North Carolina riding at Daniel Dhers’ new park, right? How good is that place? Do you plan on spending more time there in the future?
Yes! That place blows my mind because you have every thing in one place. The outside is like trails with the rhythm section and the inside is filled with street. It also makes it easy to learn all kinds of tricks with the resi setups. I hope to be there again in a month and spend most of the rest of the year there.

I’d imagine you have a pretty busy schedule this summer. Do you plan on hitting up many contests this year?
I already plan to hit Woodward for the Moongose jam and then China for the FISE stop, but I’m still planning to go to some more contests if I have a way to go. The rest of the time I think I’ll be at the DDASC.

Growing up in Costa Rica, I can’t imagine there was a ton of BMX going on there. What’s the scene like down there? Are there a lot of riders or places to ride now days?
BMX has grown around the world. Many children are associated with the sport and my country is no exception. There are many riders in the streets. It sometimes doesn’t feel like such a small country because the number of riders is so large. We have a few parks but not much for box jumps or quarters more than 6 feet tall. There aren’t any foampits or resi, so the only way to learn is to send it. This does not stop the riders from progressing all the time. 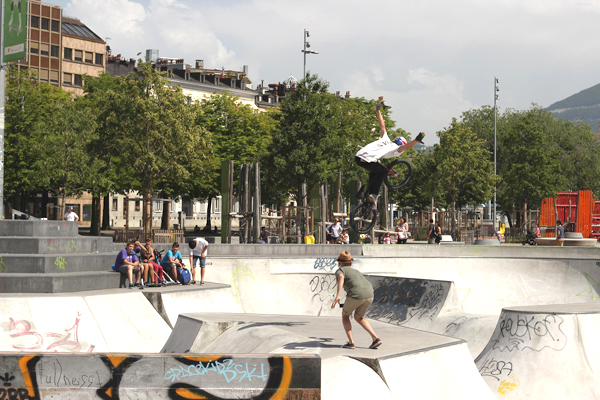 Could you ever see yourself living somewhere else at least for a while or is Costa Rica home?
Right now, I live where my bike takes me for now, but it is the only place I call home.

Who are some of the most inspiring and motivating riders for you?
Lou Uba is the first rider I saw riding a bike in my country. Daniel Dhers is a big influence. Him and many of the other riders who make riding a bike look like they’re playing a game and prove there are no limits like Kevin Peraza, Jonathan Camacho, Daneil Sandoval, and AJ Anaya. I just love to see all kinds of BMX riders though.

What do you think you would be doing today if you never got into BMX?
Damn. I have no idea. Maybe studying for my last exam to finish school and start a career like normal people..

I’d imagine you don’t have a lot of down time, but what are you usually doing when you aren’t riding these days?
I like to hang with my friends, build some dirt jumps, make a little trip to the beach or just chill at home. I don’t like to play video games. I usually like to spend time on my computer just waching the social networks or read some motivation books.

Are you a big coffee drinker? How do you like yours?
Yeees! I’m a coffee lover, haha! The best coffee is in Costa Rica. I love to put some milk and chocolate on mine, haha.

What’s the last song you heard and movie you watched?

Iron claw – Winter. It’s one of the songs that Garrett Reynolds used in his Fied video last year. The last movie was The Secret at Jake Leiva’s house in Tehachapi, California 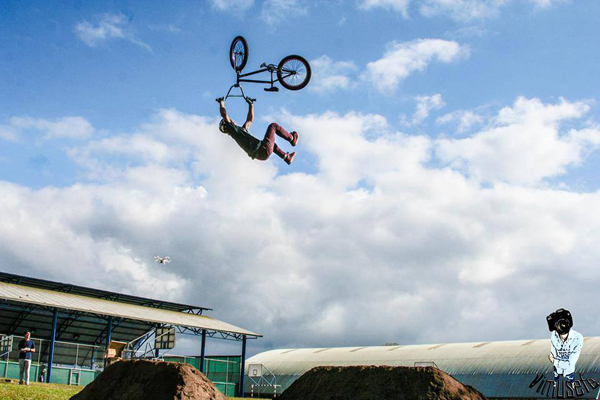 Do you have any shout outs or thanks?
I’d like to thank everyone who at some point in time given me a hand to climb to the next step. I would have to put a book together to thank everyone. Thanks to The Union for the interview and the people who took the time to learn a little about me!

Anything else you want to say?
Stay tuned because great things are coming…